Coulter Clears 100, Advances to Championship Round 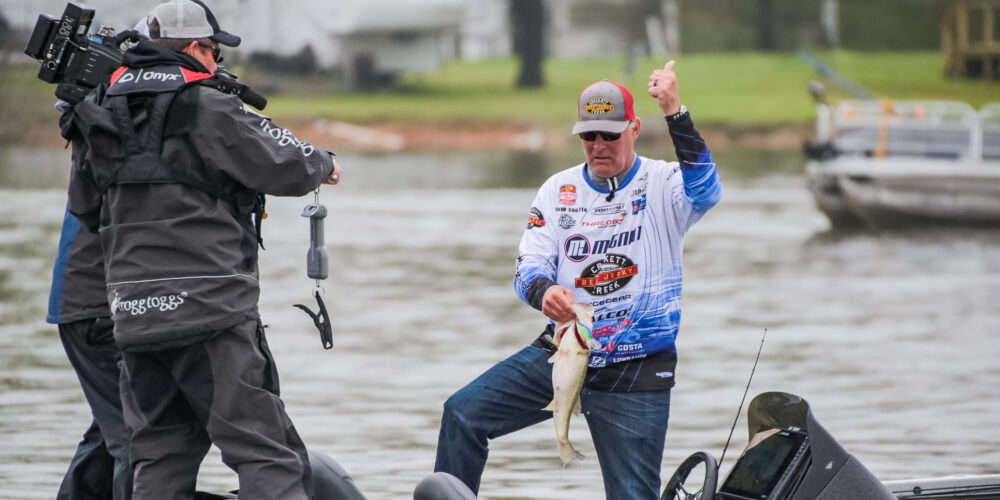 LAKE FORK, Texas – It was a wild ride Monday at the General Tire Stage Three Presented by TrueTimber on Lake Fork. While the top angler in Group B, Brandon Coulter, won the round with ease, there was constant change further down in the standings.

During Period 3, it was a continual merry-go-round in and out of the Top 20. Some anglers made heroic late-day catches and were rewarded with another day of fishing while some fell out of contention.

In total, five anglers who started the day below the Elimination Round replaced five who began the day safely in the Top 20.

It took a little while for Coulter to get started, but once he did, he cruised. After catching 56 pounds during his first day to end the round in second, he nearly matched that total with 52-6 in the final Qualifying Round of the event. His 108-6 was over 10 pounds more than the closest competitor.

“I fished the way that I wanted to and it all came together,” Coulter said. “I never bought into the sight-fishing deal because I’m not the best at it.”

Coulter has so far dominated the competition by going against the grain and fishing further offshore than most in the field. As easy as he has made it look on Lake Fork, he’ll be thrown a curveball and forced to adjust as the Championship Round moves to Lake Athens.

“Athens is not set up the same and I won’t be able to do the same thing over there,” Coulter admitted. “I went over there to check it out and I don’t think there are as many big ones there as there are at Fork, but it seems like there are more fish swimming around.”

Even though Justin Atkins finished second in the round, he was pleased with the result after adding 47-1 to his total. He finished one scorable bass from hitting the century mark. His total for the Qualifying Rounds was 98-1.

“It was a really good day and I couldn’t ask for more,” Atkins said. “I gave it a good run, but I just couldn’t keep pace with Brandon.”

Once he realized Coulter was realistically out of reach, Atkins switched to practice mode.

“I found a few areas and some new stuff for (the Knockout Round),” Atkins admitted. “I saw some more fish that I saved for tomorrow and will go to those first thing.  It may take 40 pounds to get to the Championship Round, but these guys will catch them and I wouldn’t be surprised if it takes 50 pounds to advance.”

Like Atkins, once Wesley Strader realized that Coulter was too far ahead to catch, he started looking for new areas.

Before that decision, he added nearly 35 pounds to his total today, bringing it to 78-2

“I tried to expand on what I have been doing later in the day,” Strader said, mentioning that he’s sharing water with another competitor who also qualified for the Knockout Round. “We’ve been pounding them pretty hard in my main area. If I can catch what I see, I’ll be alright. I am thinking it is going to take at least 35 pounds tomorrow to advance.”

Group A’s Qualifying Round 2 saw three moves in and out of the Top 20. Group B’s round saw five swaps. Some made significant jumps and some fell considerably.

The advancing anglers from both Groups A and B will square off for a one-day shootout on Lake Fork for our Knockout Round as they vie for a spot in the Championship Round on Lake Athens. The weather forecast is calling for a high of 76 degrees with a chance of scattered thunderstorms.

Watch all three periods of competition during the MLF NOW! live stream beginning at 9:45 a.m CST on Tuesday. Watch for free on MajorLeagueFishing.com, the MLF app, or the MyOutdoorTV app.