Davis Dialed in Heading to Knockout Round 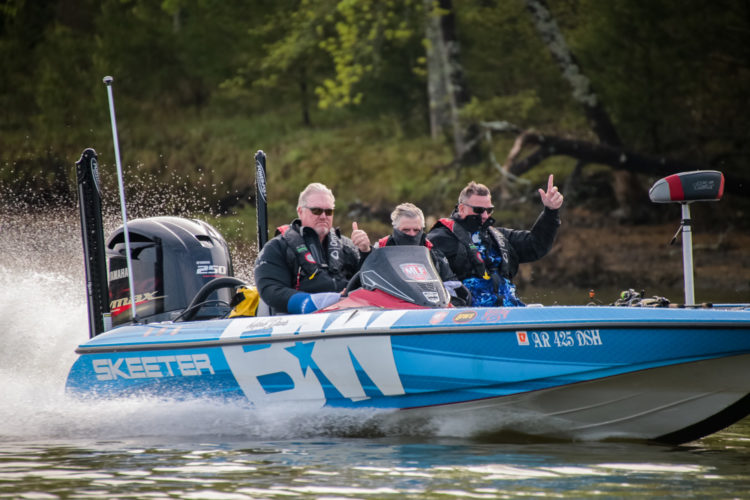 Mark Davis slides on by with a thumbs up. Photo by Phoenix Moore
April 12, 2019 • Mason Prince • Bass Pro Tour

DAYTON, Tenn. – As Zack Birge lit up SCORETRACKER™ on his way to a record-breaking day in Elimination Round 2 of the Econo Lodge Stage Four Presented by Winn Grips, there was another angler who was having an even more impressive day. Soon-to-be Professional Bass Fishing Hall of Famer Mark Davis racked up 64 pounds, 15 ounces on Friday, the highest weight of the round, on his way to a third-place finish.

Davis began his Elimination Round in 23rd place and outside of the Top 20. It was a slow Shotgun Round for Davis, but he was able to find a winning pattern today.

“The first day it was a lot slower going because the fish were really scattered,” Davis recalled. “That was a lot different today because they were all piled up and I was able run into a big group of them.”

That big group of fish added up to 42 for Davis, which pushed his two-day total to 59 for 93-7. While his average weight per fish was not as high as he would have liked—just under 1 pound, 8 ounces—it was not his strategy to target smaller fish.

“I was fishing a big-fish bait in big-fish places,” Davis revealed. “These male bass have moved up to the banks. The water level keeps changing and I keep fishing big flat areas, but I can’t figure out where the big females are. I haven’t caught a big fish all week, but I’ve caught a lot of them.”

No Stranger to Knockout Round

Saturday will be Davis’ third Knockout Round in four stages (he missed the cut in North Carolina), and he hopes to have a better showing this go-around. He has yet to find himself in a Championship Round, but the way he’s catching fish, the 55-year-old likes his odds better than he did in Stage One and Two.

“You never know what’s going to happen,” Davis said. “The good news is that this stage is different than Florida and Texas. In those two stages when I was in the Knockout Round, I just ran out of fish. Luckily, here in Tennessee I’m not out of fish. I still have some areas I think I can catch them. I have a lot of confidence going into Saturday. Everyone is catching fish and I think it will take at least 50 pounds to make it to Sunday.”

While he is not the oldest angler on the Bass Pro Tour, it’s no secret he is one of the most banged up. Multiple surgeries have left Davis moving a little slower than he used to a few years ago, and that can take a toll when you spend as much time on the water as the Arkansas pro.

“Getting older, the part I struggle with most is the physicality,” Davis explained. “I certainly know how to catch fish, you just have to feel good and get in a zone. If you feel good physically you make good decisions, you think clearer, and good things happen.”

Davis and the rest of the Top 40 anglers will compete Saturday morning in the Knockout Round. As weights reset, only the Top 10 pros will move on to the Championship Round. Coverage begins with SCORETRACKER on MajorLeagueFishing.com at 7:30 a.m. ET with the MLF NOW! live stream begins at 10 a.m. ET.