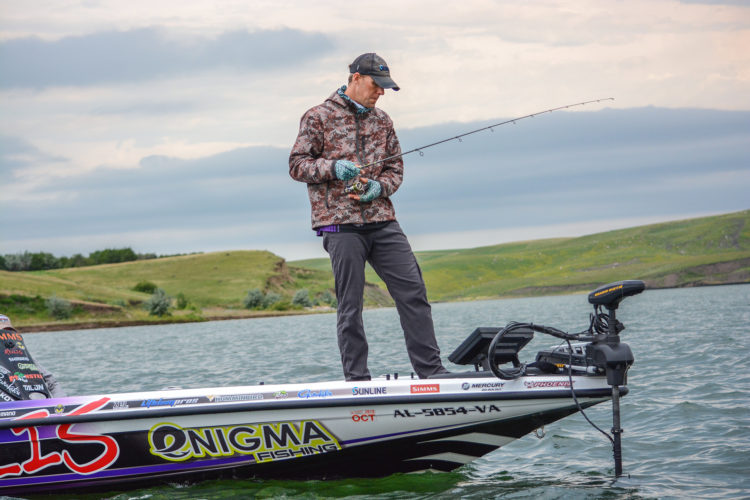 Aaron Martens at work with a drop-shot. The Alabama pro has fished this finesse presentation all over the country. Photo by Joel Shangle
October 30, 2019 • Mason Prince • Bass Pro Tour

MLF pro Aaron Martens – whether he wants to be or not – is known around the bass-fishing world for his mastery of the drop-shot technique. Martens rode his drop-shot skill all the way to the bank in June, winning a $100,000 check and the Stage Six Championship on Table Rock Lake in Missouri.

The California pro frequently protests that he’s not crazy about being known as a “drop-shot guy,” but if it keeps winning him events, he’ll learn to live with it.

“The thing about a drop-shot is that it is almost always the way to go,” Martens stated. “I kind of kick myself for not using it enough sometimes. I usually have one to three drop-shots tied on and ready to go at any given time during an event.”

Martens has fished a drop-shot all over the country during his 22 years as a professional, so he’s found some places where it can work better than others.

“I tend to throw drop-shots less often when I’m fishing in the southern United States,” Martens explained. “If there’s a really muddy lake with dirty water, then it’s usually not the best place to use a drop-shot. Since a drop-shot suspends instead of hitting the bottom, it’s harder for a fish to locate in dingy water. You need clear water with good visibility to be able to use one effectively. That’s why it’s more of a northern-style bait.”

When Martens is setting up his drop-shot rig, he starts with a spinning rod spooled with 16-pound Sunline SX1 braided line. The bait can vary, but the hook stays consistent: Martens goes with a Gamakatsu G-Finesse Heavy Cover Hook when drop-shotting. But almost as important as all of those aspects is the length of his 8- to 10-pound fluorocarbon leader.

“The leader is an important part of the drop-shot and that length can change depending on different variables,” Martens detailed. “If the water is really dirty, then I go with the shortest leaders I use, around 1 to 2 inches. In clear water where the visibility is around 20 to 30 feet, I go with 2- or 3-foot leaders. On average, I would say 8 to 10 inches is probably your best bet.”

You can’t have a drop-shot without a weight, and Martens has some preferences about weights. However, it’s all dependent on the conditions.

“I use a 3/16-ounce weight normally on my drop-shots,” Martens said. “Sometimes that can vary with either a 1/16-ounce or a 1/8-ounce if there’s no wind and the water is clear. If the fish are more aggressive and the conditions are a little tougher, you might need to up your weight to 1/4-ounce. It’s just something you have to figure out and adjust to while you’re out there.”

Knot Up for Debate

Martens points out that a drop-shot is one of the most simplistic rigs that you can throw, but there are little things you can change to make it even better. One of the biggest mistakes the Simms pro sees from his fellow drop-shotting anglers is the knots they’re tying.

“A lot of anglers still use a Palomar knot to tie their drop-shots and that’s just not ideal,” Martens advised. “A Palomar knot can take so much punishment from the fish when you set the hook because there’s no weight in front of it, it’s just straight line. What I choose to tie instead is a Double Uni knot, it works better for me and is more reliable.”

Armed with these little tidbits of information, Martens believes that you can catch fish at a blistering pace if you utilize the simple yet effective drop-shot.