EDWIN EVERS: How Deep to Start in the Summer? 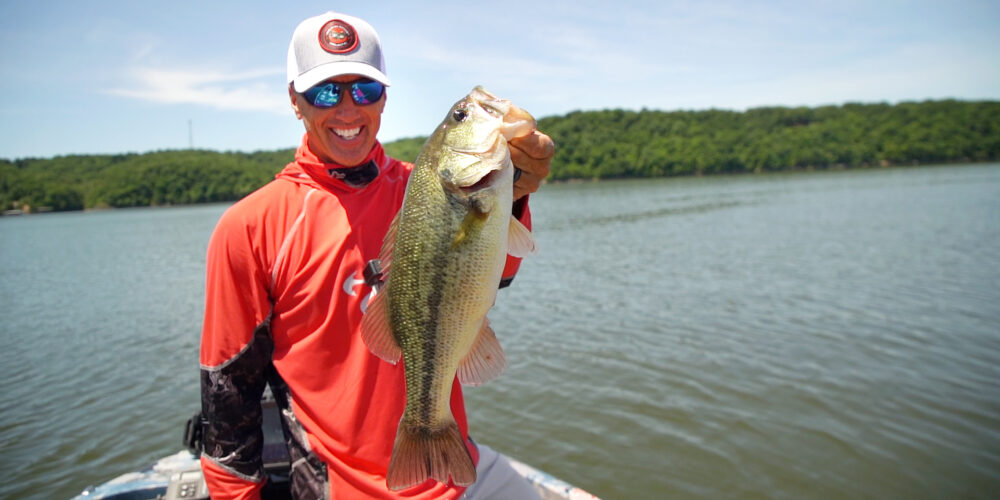 One of the most important decisions bass anglers have to make in the summer is how deep to start their fishing. We’d all like to catch them on top or in really shallow water —  and sometimes we can do that — but as a general rule, that’s not where you’re going to get the most or the biggest bites. For that, you’re going to have to go deeper … but how much deeper?

I get that question a lot, and it’s forced me to think about it and try to come up with a guideline that will work pretty much all across the country and from border to border. I believe I have it now, and I’ve come to realize that it’s something I’ve been doing instinctively for a long time. It’s helped me, and I think it will help you, too.

It Starts With a 5x Calculation

My general rule starts by determining how much visibility there is in the water. For that, I’ll drop a white or bright lure over the side and watch it as it sinks. When I lose sight of that lure, I check the depth. Then, I multiply the depth times five, and that’s my basic starting point.

For example, if I lose sight of my white swimbait at about 2 feet deep, I’ll plan to start my fishing at about the 10-foot mark. It doesn’t mean that 10 feet is the magic depth or that I’m going to load the boat by fishing at 10 feet, but it gives me a place to start, and — more times than not — I can catch one or two around that depth and then fine-tune things.

Now, before we go any further, I’ve got some disclaimers.

First, I use this guideline only for largemouth — not for smallmouth or spotted bass, which tend to hold quite a bit deeper. Second, it really doesn’t work very well in Florida. In Florida, you can often see 6 or 7 feet deep, but there’s usually not any water five times that deep. Finally, there’s a limit to how deep we can go in summer, and that limit is the thermocline … which I’ll get to in just a moment.

Expanding on the 5x Calculation

Once I’ve made my quick 5x calculation to determine my starting depth, I like to idle around likely areas with an eye on my electronics, especially my Down Imaging. I’m looking for the depth at which suspended things start to disappear. It might be at 18 feet or 35 feet or maybe somewhere in between, but there will be a depth at which you stop seeing fish and suspended particles in the water. That depth marks the thermocline.

It’s where the water starts to get rapidly cooler, and it’s the deepest area where there’s still enough dissolved oxygen to support fish life for extended periods.

A lot of what you’re seeing when you see that hazy line across your sonar screen is suspended particles that can’t easily sink below the cooler water of the thermocline. If you can’t see that line, it means the body of water hasn’t stratified yet into the three layers that make up most lakes and reservoirs in summer or it means that you need to turn the sensitivity up on your unit until you can see it.

The thermocline is important because you don’t want to fish below it … at least not more than a couple of feet below it. There’s not going to be much bass life down there.

I mention this because of my 5x guideline. If you can see 10 feet deep on your lake, the 5x guideline says you should start at 50 feet, but if the thermocline is at 25 feet, start there instead. Treat the thermocline like it’s the bottom. Fishing any deeper than that isn’t going to pay off very often.

Once I’ve calculated my 5x depth and determined that that depth isn’t below the thermocline, I’m ready to focus on bass. I’m going to idle around looking for something different around my 5x depth. Maybe it’s an underwater hump or a brushpile on a point or a channel bend with stumps on the edge. I’ll also look for fish that are holding on that structure and cover.

When I’ve found structure and cover at what I think is the right depth, I’ll start fishing, and I’ll probably be casting a deep-diving crankbait, a plastic worm on a stand-up head, or a swimbait. Check out the video I made talking about those lures and how I use them in summer. Another great bait at this time of year is the bucktail jig. You can see more about how I fish bucktails in this video.

Another question I get a lot at this time of year is, “How long should you fish for those offshore bass if you’re not getting bit?” The answer for me is 10 to 15 minutes. That’s long enough to make several presentations with a couple of different baits and from a few different angles. If you’re not getting any bites, fire up the outboard and keep looking.

But don’t give up on that spot!

If that spot had all the elements to be special — the right depth, some good structure and cover, etc. — it may be that your timing was off. You just weren’t there when the bass were feeding. If you come back in an hour or two, it might be on fire!

Timing is one of the great unknowns in bass fishing. There’s just no substitute for being there at the right time. But if you’ll give my 5x guideline a try, I think you’ll be starting in some of the right places.