EDWIN EVERS: I Have Some Tips for Your Late-Winter Cranking - Major League Fishing
Shop 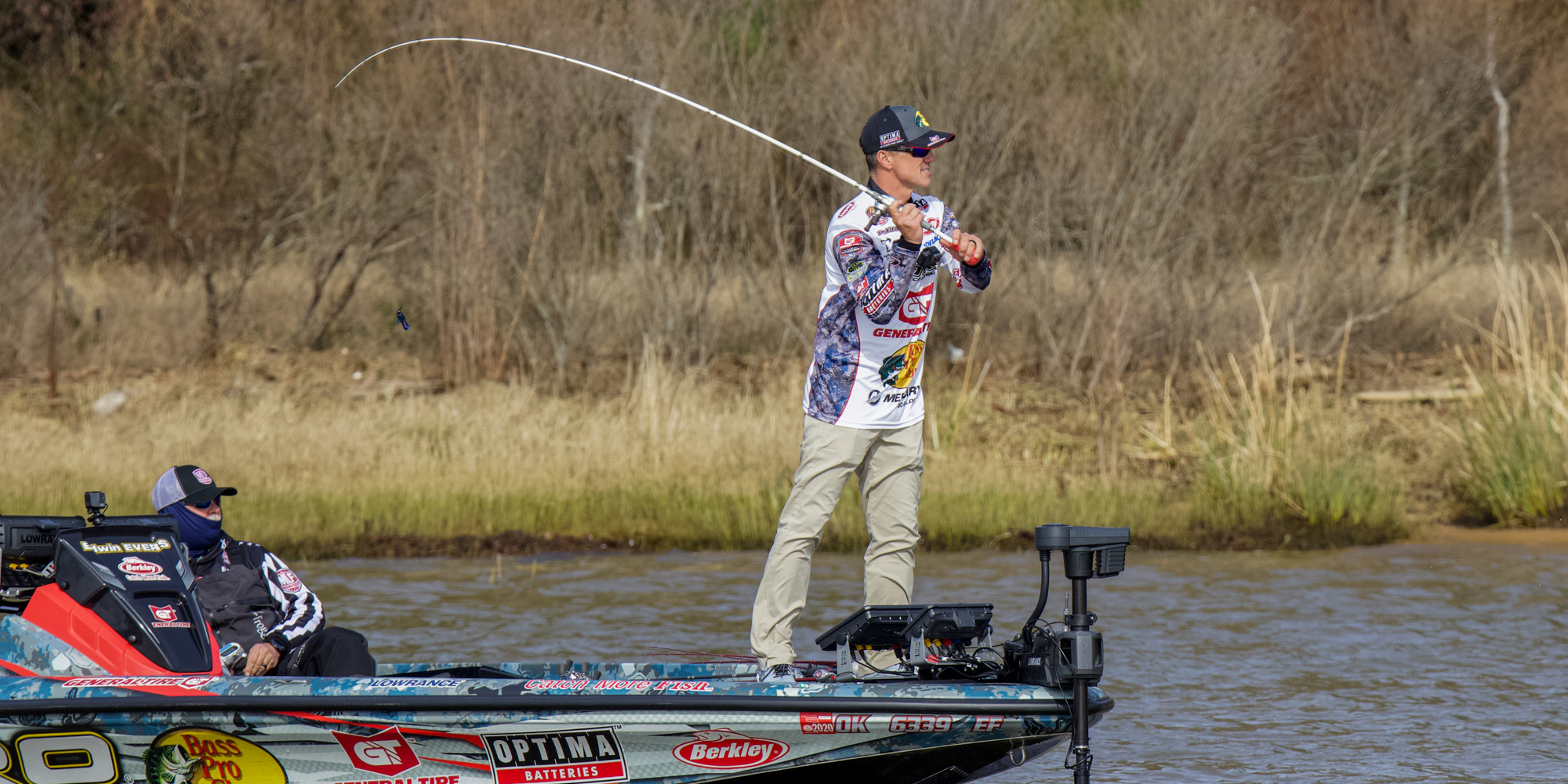 If your weather has been anything like what we’ve had in Oklahoma this winter, your lakes are higher and warmer than normal.

What that means to us as bass fishermen is that the usual baits and patterns of February might not be so effective this year. Ordinarily, I’d be reaching for a jerkbait or a jig right about now and hoping to tempt some lethargic bass into biting. But because of the conditions, I’m fishing something else — something pretty new — and I want to tell you about it.

Get to Know the Frittside

Berkley has a new flat-sided crankbait they call the “Frittside.” As you probably guessed, it was designed by legendary pro angler David Fritts, who knows as much about fishing and designing diving baits as anyone in the world.

Because I’m on Berkley’s pro staff, I’ve been throwing the Frittside for more than a year — since it was in its prototype stages — and I’ve been catching fish with it every step of the way. It’s that good!

Of course, flat-sided crankbaits aren’t new. They’ve been around for decades and have earned a reputation for cold-weather bass fishing. Some say it’s because they have a tighter wobble and more subdued action than rounded diving lures.

A lot of people will tell you that the tight wobble and subdued action do a better job of imitating baitfish in cold weather, but that’s just guesswork. I’m a fan of flat-sided crankbaits — and especially the Frittside — because they work!

It might be fun to speculate on why they work, but we’ll probably never really know. What’s important is that they’re a great alternative to other crankbaits, jerkbaits and jigs at this time of year, and under the conditions we’re facing over much of the country.

There’s a lot of impressive technology behind the Frittside that makes it fish better and easier than other baits that might look similar. For one thing, along with its tight wiggle, it has a lot of flash because it “rolls” quite a bit on the retrieve — like some of the great balsa baits of years ago.

But the Frittside is a plastic bait, and that has some big advantages over balsa. For one, it’s more durable and castable than balsa. For another, the patent-pending “FlashDisc” in the belly of the lure is what makes it roll, gives it a low center of gravity and makes it really stable as it tracks through the water.

The Frittside is also neutrally buoyant, so when you pause the retrieve, it suspends. There’s just a great subtlety to this crankbait that makes it special, and it lets me cover more water than a jerkbait or jig.

Where and How to Fish the Frittside

I fish the Frittside in a lot of the same places I’d throw a jerkbait: main lake and secondary points, riprap banks, just about anywhere in between wintering areas and the places where bass will be spawning in another month or two.

I like to throw it on 10- to 12-pound test Bass Pro Shops XPS 100% Fluorocarbon line with a Johnny Morris Platinum Signature casting reel (6.8:1) and 7-foot, medium-heavy action Bass Pro Shops Crankin’ Stick. If the reel seems fast for late winter fishing or crankbaiting generally, it is, but I do something to counteract that.

You see, I like a 6.8:1 gear ratio. That reel picks up 28.5 inches of line every time I turn the handle, and that’s a comfortable pace for a lot of my fishing. But when I need to slow down a little — like when throwing the Frittside In late winter — I don’t fill the spool all the way up with line.

Less line on the spool means that each turn of the handle picks up less line. Instead of getting 28.5 inches, I’m probably only getting 24 or 25 inches per turn, and that can make a difference in retrieve speed without changing my comfort level.

The other thing I do to accommodate the bass’ slower metabolism at this time of year is to use a pull-pause retrieve when the water’s less than about 50 degrees. If the water’s warmer than that, I’ll crank the bait slowly, but when it’s colder I’ll usually just pull the rod to the side — kind of like a sweeping hookset done in slow-motion, just fast enough to make the bait vibrate. Then I’ll pause the bait for a second or two — sometimes longer — and that’s often when the bite occurs.

Size, Color Options (and How I Choose)

I keep my color choices pretty simple. In the late winter and early spring, I’m almost always using a craw pattern — bright reds and oranges in dirty water and browns in clear water. After that, I generally switch to baitfish patterns.

The Frittside comes in three sizes — 5, 7 and 9 — that range from 2 1/4 to 2 3/4 inches long. When the water’s coldest, I’ll generally start with the No. 9. It’s the biggest and deepest diving of the three. It’ll get down to around 10 feet. As the water warms up and the fish are a little shallower, I’ll switch to the No. 7 to fish the 5- to 7-foot depths. The No. 5 has the widest action of the three and is great at the 2- to 5-foot level when fish are more active.

I had a cool experience with the Frittside at the inaugural Major League Fishing REDCREST championship event last year on the Mississippi River. In practice, I was throwing a squarebill crankbait, but I just couldn’t get bit with it. When I switched to the Frittside, I caught a double on my first cast. That made me a believer!

I was able to take what I learned and use it to win the tournament and $300,000, capping off the best year of my career.

KEVIN VANDAM: A Day in My Lockdown Life