EDWIN EVERS: I Salute The General (and You Should Too!) 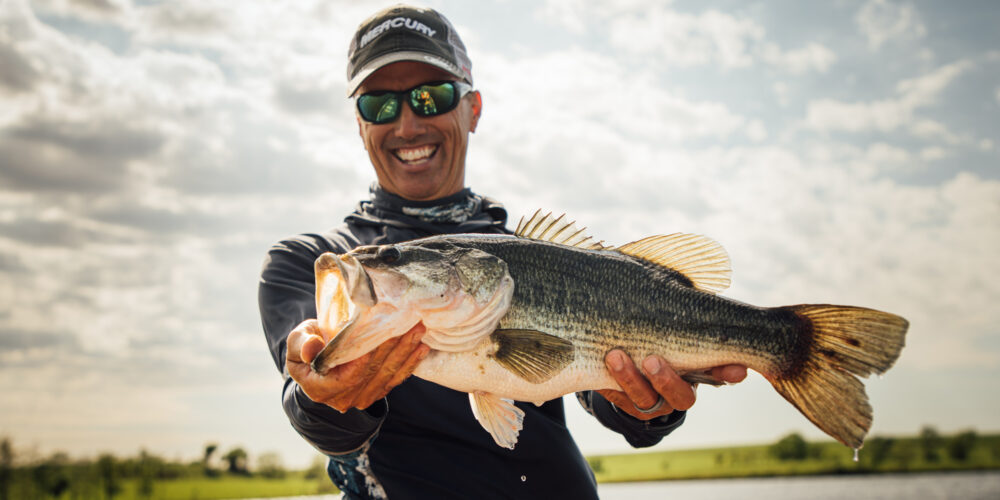 Fish like this are the reason why the Berkley General is a regular part of my tournament arsenal.
June 2, 2021 • Edwin Evers • Bass Pro Tour

A few weeks back, I went out to film an episode of Project E. I went to a lake I know pretty well and figured I could find a vibrating jig bite.

After an hour of chunking and winding with absolutely nothing to show for it, I finally picked up a weightless wacky worm and absolutely whacked ‘em with it! It seemed like every bass that had ignored my other baits was rushing to eat a Berkley PowerBait MaxScent The General.

There was a time early in my career when I didn’t like to fish with spinning gear. I was a “power” fisherman, and spinning gear didn’t fit in with the way I wanted to fish. All that changed, however, when I came to realize that power fishing isn’t always the answer and that spinning gear can save your bacon!

That was proven to me in 2006 when I used a wacky stickworm to catch a Lake Amistad lunker that weighed more than 10 pounds. Today, I never get on the water without spinning gear, and one of my spinning combos is usually set up with a weightless, wacky-rigged General in green pumpkin. Yes, it’s that good, and it’s saved the day for me many, many times.

Why do I like the wacky-rigged General? I like it because they eat it! What other reason is there?

I don’t care where you fish or what kind of bass you fish for, there will be days — lots of them — when nothing in your boat can compete with a wacky-rigged General.

Maybe the best thing about the bait and the rig is that anyone can fish it. It doesn’t take a tremendous amount of skill to get really good with it, or to catch a lot of fish with it. Once you get the rigging right, all you have to do is cast it near some bass and let it do its thing. The General does the rest.

My hook is a 1/0 or 2/0 straight-shank, light-wire worm hook, and I run that hook straight through the middle of The General so that it hangs about evenly off both sides.

And that’s it! I’ve experimented with O-rings and shrink-wrap tubing and other harnesses designed to hold the bait in place — and I’ll continue to try them as I keep refining my methods — but simply putting the hook through the middle of the bait works just fine. Part of the reason for that is that The General is made of durable plastic. It can handle lots of casts before the stress eventually becomes too much and it tears. It also has a great falling action. So, it’s soft and durable. Other stickworms tend to be one or the other, but not both.

When it comes to color, you can use any color you like … as long as it’s green pumpkin. I use other colors only when I’ve run out of green pumpkin.

I generally fish the weightless, wacky-rigged General in less than 6 feet of water, and I like to throw it around cover that’s not so heavy you want to reach for your flipping gear.

How I Fish The General

My technique is super simple. I cast it out and let it fall on a slack line. If you do anything more than that, you’re probably overfishing the bait. The General will wiggle and waft and drift as it falls, looking like a dying minnow or other easy meal.

I like to keep my rod at the 10 or 11 o’clock position unless I’m skipping the bait under docks or low-hanging limbs (then I hold it lower). That way, I can see the line better and occasionally gently twitch the slack in the line to give The General a little bit of a dying quiver.

The yellow line serves as a strike indicator. When it jumps or starts to move off, I take up the slack and lean into the fish. Don’t worry; the bass is not going to let go of it, and you don’t need to set the hook hard. Since the line is pretty light, a light wire is the best choice here.

The worst thing you can do with the wacky-rigged General is to give the bait too much action. It has plenty on its own, and the MaxScent formula impregnated into the plastic puts out a fish-attracting scent that will draw bass to the lure.

Looking back, I have no idea how many fish I missed out on before I changed my attitude toward spinning gear and stickworms, but I know it’s a lot. Fortunately, I learned from that mistake. Now, I stay rigged up and ready to go.