Elias Ready for Knockout Round on St. Clair 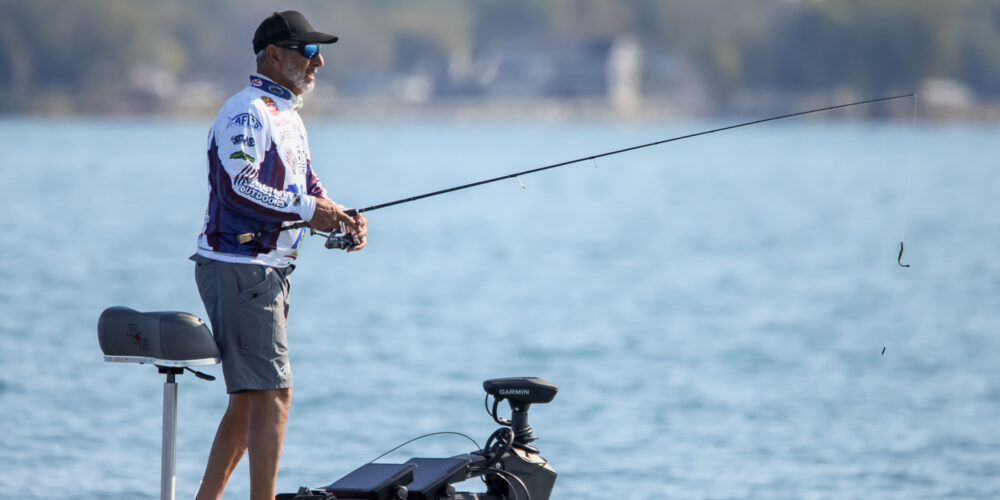 ST. CLAIR SHORES, Mich. – Throughout a professional fishing career that started in the 1970s, Paul Elias has racked up some serious accolades.

He’s a former Bassmaster Classic champion who showed the world the “kneeling and reeling” technique to get crankbaits down deeper, and introduced the world to the Alabama rig with a dominant FLW win in 2011 on Lake Guntersville in Alabama. Elias also set a weight record that still stands: 20 bass for 132 pounds, 8 ounces on Falcon Lake in Texas.

All past success aside, Elias admits that he’s still learning and trying to get accustomed to the every-scorable-bass-counts format of the Bass Pro Tour. But thanks to a dramatic late charge in his second qualifying day at Stage Seven at Lake St. Clair, Elias will fish his second career Knockout Round on Tuesday.

Throughout the first two days of the Group A Qualifying Rounds, Elias had caught enough to put him in position to advance. He was close enough at the end of his second day that the MLF NOW! camera crews found him late in the third period to witness the final moments.

“With about 40 minutes to go, the camera guy came and got in the boat,” Elias said. “I felt like I was going to advance, but then I couldn’t get a bite when the camera started, even though I saw them everywhere on my LiveScope. Then I started to catch some and was having such a hard time landing them that I decided I was going to boat flip every one of them.”

Those boat flips led to some untimely fish-landing violation penalties, but he managed to advance thanks to three fish that he caught in the final 15 minutes, even with the penalty time accrued.

“I feel like Rip Van Winkle and that I’ve been asleep for the past few years,” Elias joked. “I feel like I’m starting to wake up finally. I’ve had so much trouble landing fish since I joined the Bass Pro Tour – I know everyone loses them, but that and making some bad decisions have hurt my performances.”

Still Adjusting to the Format

After spending more than 40 years fishing in the five-fish format, Elias has taken a little time to adjust to a new set of rules, but even with the setbacks, he’s a big fan of the Major League Fishing format.

“There’s no doubt I probably would have done better with a five-fish format because that’s how I like to fish and how I’ve always done the best: fishing slowly,” he said. “I’m always looking for a spot or two and will sit there and fish it very methodically. That’s how I’ve had some of my best tournaments over the years, but this way of fishing is new and exciting to me.”

The drama around the Toro Cut Line is thrilling to watch on cut days for fans and nerve-wracking for the anglers competing. But Elias enjoys the added excitement and subsequent pressure he feels as an angler.

“I haven’t experience that stress much since I haven’t been in that position often, but what I felt (Sunday) was more than enough stress for me,” he said. “The intensity is mentally exhausting because you know the clock is ticking. I like the format, and I’m determined to get over the hump and figure it out, and I think that means being willing to cover more water.”