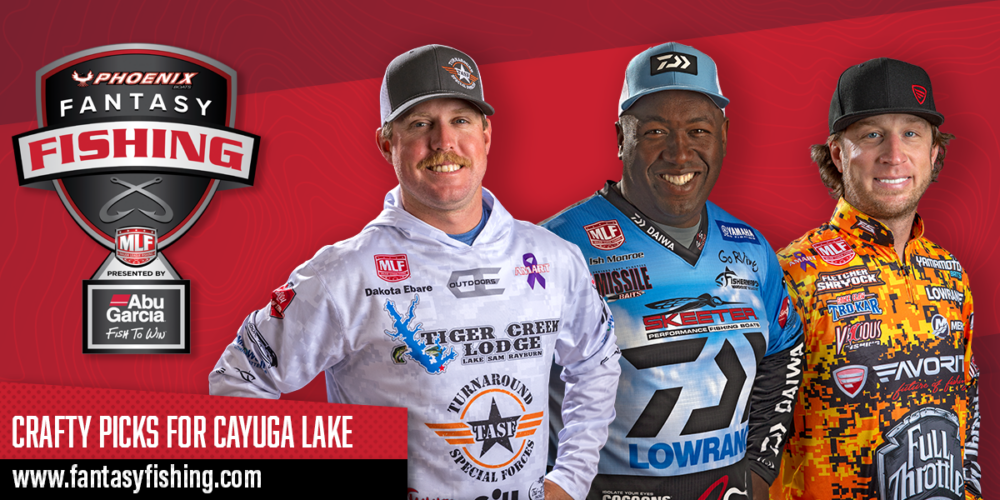 After a long break, the Bass Pro Tour is inching closer to the end of the season with the start of the next event. That means it’s time to make your fantasy picks for the Fox Rent A Car Stage Six on Cayuga Lake Presented by Googan Baits.

There are plenty of angles to consider this week with anglers fighting for the Bally Bet Angler of the Year title, Heavy Hitters and REDCREST qualifications, and some simply trying to make it one more year on the Bass Pro Tour.

While points and each fish count the same all season, the stakes are high at this point in the season. Because of this, I’m going with the closers and those who desperately need to make some moves to salvage their seasons.

Wheeler and Ebare Should Continue Momentum

Jacob Wheeler is having another fantastic season and he’s a safe pick at every event. He’s been a Top 10 machine this year and there’s no reason to think he’ll do anything different on Cayuga. He’s laser-focused on the Angler of the Year title and he’s had two months to formulate his plan for this event.

The other angler I’m going with is Dakota Ebare. While there’s no official rookie of the year award on the Bass Pro Tour, he’s been the best of the new faces competing this season. He’s 11th in points, safely inside the REDCREST cut and should be one to watch at Cayuga. It also sets up nicely for him as he has plenty of experience flipping grass back home on Sam Rayburn Reservoir in Texas. The fishery sets up well for him and he’s more than proven that he belongs at this level.

In addition to the AOY and REDCREST points races, many eyes are focused on Heavy Hitters. I’m guessing Fletcher Shryock is one of those, as he currently sits four spots out of qualification in 34th. This is notable because Shryock has been one of the best (if not the best), in that specialty event.

He finished fourth earlier this year on Lake Palestine, eighth in 2021 and 12th in 2020. He also claimed some of the lucrative big bass awards along the way. Shryock’s fishing style plays well with big bass and he’s excellent flipping and pitching grass, which should be perfect for Cayuga Lake. He has some extra motivation as he vies to qualify for his fourth Heavy Hitters event.

The Under 40 Picks: Hite and Monroe

Even though it’s New York, largemouth figure to be a bigger player than smallmouth on Cayuga. Both will make appearances, but most expect green bass in vegetation to be a common focus. There are two anglers below 40th place that should have a great shot at doing well this week — Brett Hite and Ish Monroe.

Hite has had a tough time this year and sits 71st in the points, but we all know he’s deadly with his Jackhammer ChatterBait anytime grass is present. He’s also had success on Cayuga, finishing third in the 2016 Elite Series stop here. On the other hand, he finished 79th there in 2014. But, I still believe that Hite’s worthy of your pick here.

The same can be said of California’s Monroe. He’s a big-bass specialist and has been having a challenging year, sitting in 61st. If he’s going to make a rally and make REDCREST, it has to happen this week. This lake is the perfect place for him to do it. He finished mid-pack (53rd in 2016 and 49th in 2014) in his two trips there with the Elite Series, but he’s due for a good event and the fishery suits his style well.