FANTASYFISHING.COM INSIDER: Crafty Picks for Lake of the Ozarks Should Include Anglers Who Catch ‘em Fast 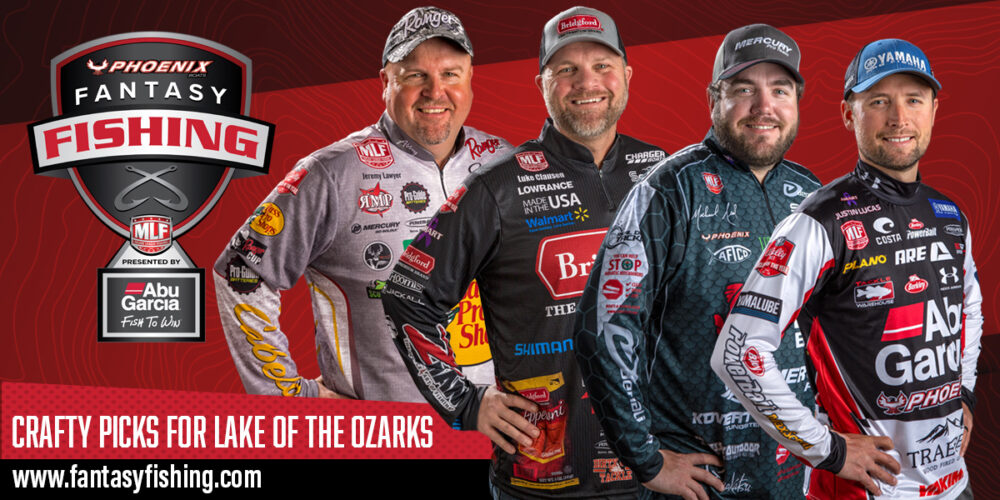 It’s time to set your fantasy rosters for the Bass Boat Technologies Stage Four Presented by Bass Cat on Lake of the Ozarks. By all accounts, fishing should be great during this event, with fish shallow and in a biting mood on this Ozark Mountains impoundment. The 80-angler field should catch bass with a host of shallow-water techniques, and everyone should catch them, leading to a conundrum for Phoenix Fantasy Fishing Presented by Abu Garcia team managers.

So far this season, I’ve stuck around the top 100 managers thanks to some strategy – I have a new strategy this week based around picking anglers who catch fish quickly, leaning on local knowledge, and choosing two anglers poised to do better than their Bally Bet Angler of the Year points standing shows.

At some events, slow and steady wins the race. But that’s not likely to be the case at Lake of the Ozarks as the fish catches should be plentiful. My strategy is to pick anglers who tend to catch fish in bunches.

Jacob Wheeler is an obvious pick here and should be heavily represented on fantasy teams. He may not be offshore using his forward-facing sonar on Lake of the Ozarks with many bass up shallow, but Wheeler will almost certainly find a way to catch them in a hurry somewhere.

Michael Neal and Justin Lucas are my other two picks. Neal has become one of the best and most consistent anglers on tour, catching them just about everywhere, and should do so again on Lake of the Ozarks.

Lucas is fresh off a second-place showing at the Tackle Warehouse Pro Circuit stop on Pickwick Lake and has some great momentum after finishing second to Ott DeFoe at Heavy Hitters. Lucas is in a groove and due for another win after fishing so well this spring.

Out of all the anglers in the field, Bass Pro Tour rookie Jeremy Lawyer may know Lake of the Ozarks the best of anyone. He won a 2018 Toyota Series on the lake – granted, that was a fall event—but Lawyer knows how the lake sets up and how good the lake can be.

Lawyer may be in the “rookie” category, but he’s an established pro and has proven he belongs at this level (he’s currently 31st in AOY points). Early this year, Lawyer predicted that Stage Four could set records for catch and weight totals if things line up right, and conditions appear ripe for a catch-fest with good weather on the horizon.

The Under 40 Picks: Ehrler and Clausen

As the game rules are set up, one angler you pick from each group must have a ranking below 40th place in the Angler of the Year standings. Brent Ehrler in Group A and Luke Clausen in Group B are my picks.

Ehrler has burned other fantasy players (and me) so far this year with some inconsistent and un-Ehrler-like finishes, but he can’t stay down forever. After cashing a $25,000 big bass check at Heavy Hitters, he may be riding some momentum. The lake and season also seem to set up well for Ehrler, as he can likely fish a Yamamoto Senko anywhere on Lake of the Ozarks and catch them.

The other wildcard is Luke Clausen, who hasn’t made a tournament cast since the exciting closing moments at REDCREST where he nearly pulled off the win. Clausen’s experience with Lake of the Ozarks isn’t much, but that’s when he seems to do best, just fishing what looks right. He’s an angler who fishes the moment and catches them with various baits, which should work well at Stage Four.