FANTASYFISHING.COM INSIDER: Go with Hot Hands and Prior Success on Mille Lacs 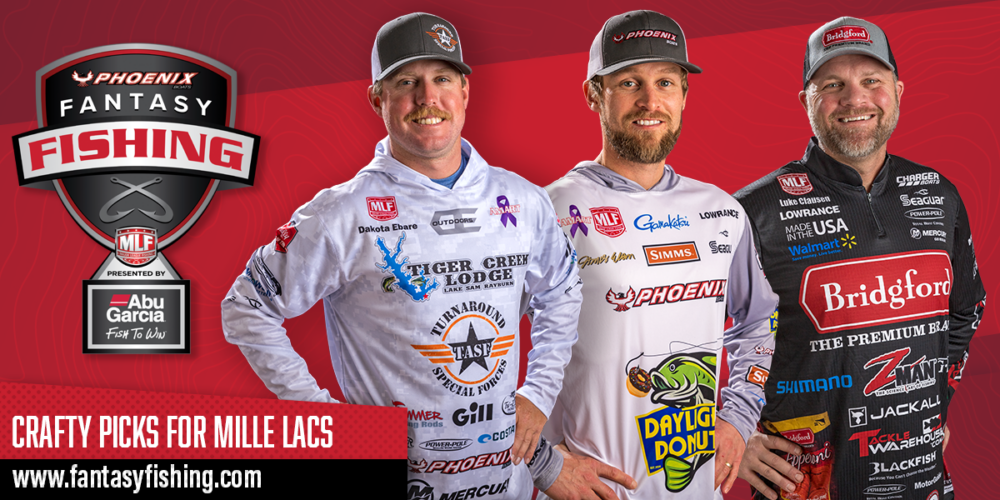 FantasyFishing.com Insider, Tyler Brinks, gives his picks for Stage Seven on Mille Lacs and lists who he has on his team in Groups A and B.
September 8, 2022 • Tyler Brinks • Bass Pro Tour

The Bally Bet Stage Seven Presented by Minn Kota on Mille Lacs Lake, Minnesota, will be a fitting end to a great season, with the potential for some giant smallmouth bass. When the event concludes, we’ll know the Bally Bet Angler of the Year, REDCREST and Heavy Hitters qualifiers, and the FantasyFishing.com league and overall champions.

I believe that sticking with the hot hands and taking a peek at history on the lake will be the best bets for drafting a quality Phoenix Fantasy Fishing Presented by Abu Garcia squad for Mille Lacs.

Stick with the Hot Hands

During the last edition of this fantasy preview, I mentioned Jacob Wheeler and Dakota Ebare as must-picks. It wasn’t going out on a limb picking two of the hottest anglers in the world right now, but they made me look good, finishing second and sixth, respectively, at Stage Six. They’re on my teams again for this event, as there’s no indication they’ll slow down.

Wheeler has yet to miss a Top 10 this season and Ebare is catching them everywhere on both the Tackle Warehouse Pro Circuit and Bass Pro Tour. After so many close calls, both anglers are well overdue for a win this season. It won’t surprise anyone if one of them rides home from Minnesota with a trophy.

There were only two past pro-level events on Mille Lacs and not all of the field fished those specialty postseason Bassmaster Elite Series events. But plenty of anglers fishing this week fished both. Among those, Brent Ehrler (second and 18th), Adrian Avena (14th and 16th), and Kevin VanDam (10th and 17th) figured out Mille Lacs both times. Aside from James Elam — we’ll talk about him in a second — they were the only three to finish in the Top 20 at both events.

On a lake that can be tricky to locate big smallmouth and adapt to varying wind conditions, these three have solid history on the lake and should be part of your team.

Some solid anglers with past Mille Lacs success are below 40th in the Bally Bet Angler of the Year standings.

For Group A, I’m going with Luke Clausen. He’s a smallmouth specialist and finished fifth in his one trip to the lake. Hailing from Spokane, Washington, Mille Lacs is a 19-hour drive for Clausen: easily the closest event of the season to home. Clausen has also spent some time in recent years filming on Mille Lacs with sponsors and might as well call this a “home game” compared to some of the other fisheries on the schedule this year.

Elam is a steal in Group B and would be my pick, regardless of his points this year. In two trips to Mille Lacs, he’s finished second and fifth, easily the best of any angler with history there.

While Mille Lacs is a premier smallmouth fishery, it’s also full of largemouth bass that get ignored by many anglers. We may see some anglers try their luck with the green fish and make some noise, and there’s also a possibility that it will be the way to win if it gets too rough offshore. Expect Randall Tharp and Andy Morgan to at least give the largemouth a fair shot. They’ve both had great success this year fishing their strengths and it could happen again as we wrap up the season.

Be sure to submit your picks at FantasyFishing.com before the deadline on Saturday, Sept. 10, at 9 a.m. EDT.