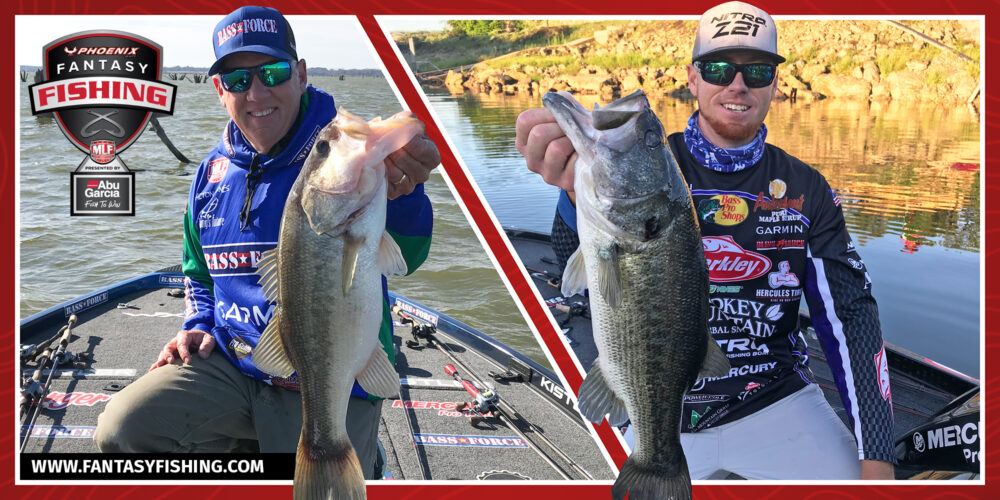 Alton Jones and Josh Bertrand pick their own teams for Stage Six on Cayuga Lake and help you narrow down some picks of your own for Phoenix Fantasy Fishing Presented by Abu Garcia.
July 30, 2022 • Mason Prince • Bass Pro Tour

The Bass Pro Tour heads to Cayuga Lake for the first time for the Fox Rent A Car Stage Six Presented by Googan Baits. How the event will shake out is still unknown, but it’s about time to start making your picks for Phoenix Fantasy Fishing Presented by Abu Garcia.

While there isn’t any Bass Pro Tour history in Union Springs, New York, pros Josh Bertrand and Alton Jones are here to give you some insight on who you should consider adding to your team — because they’ve already made their picks.

This will be the first time this season that the Bass Pro Tour has ventured above the Mason-Dixon Line, so both Bertrand and Jones have their sights set on anglers who not only call the northern part of the U.S. home, but also have a history of performing well up north.

“Dave Lefebre is a guy I’m expecting to do really well,” Bertrand said. “He’s a northeastern guy from Pennsylvania and he doesn’t live far from Cayuga at all. I don’t know how many times he’s fished there, but I wouldn’t be surprised if it was more than a vast majority of the field.”

While Lefebre won a BFL Regional on Cayuga Lake in 2002, Kevin VanDam notched a win on Cayuga during a Bassmaster Elite Series event in 2016. VanDam’s success paired with his northern roots has Jones all-in on the G.O.A.T.

“VanDam is obviously a guy who has won there in the past, but I’m mainly picking him for my team because he’s a guy who just knows how to fish northern lakes,” Jones said. “He knows how to get bit in the summer on these northern lakes and this lake sets up well for him to play to his strength, which is power fishing.”

Bertrand rounds out the picks of extraordinary northern gentlemen with a New Jersey native.

“Adrian Avena is another regional guy that sticks out in my mind,” Bertrand said. “He’s a really good fisherman wherever he goes, but he knows these northern fisheries better than a lot of guys. He’s comfortable up north, and that’s a big factor.”

Of course, to stay competitive, Jones and Bertrand both agree that you’ll need to take some big names currently sitting inside the Top 40 in the Bally Bet Angler of the Year standings. Their first pick they both agree is a must-have on your roster.

“Jordan Lee shouldn’t be a surprise to anyone,” Bertrand said. “He almost won on Cayuga back in 2016 but came away with a second-place finish to Kevin VanDam. If you’re looking for a specific reason to pick Jordan, you don’t need one. He’s good anywhere and everywhere he goes. Expect him to perform well again on Cayuga.”

Jones calls on his Texas roots to make his second pick.

“Todd Faircloth is perhaps the best deep-grass fisherman we have on the Bass Pro Tour,” Jones said. “He also knows the fishery well and has had some solid history there in the past. I think the way the lake is setting up, we could see Todd in contention very early.”

Bertrand goes with a guy who’s had a solid five events to begin the season, and if all goes right, Cayuga Lake sets up well to make it six in a row.

“Watch out for Shin Fukae,” Bertrand said. “This place is going to get a lot of pressure throughout the week, and someone who is a wizard with a spinning rod in his hands can catch them how no one else can. If Shin can make it to the Knockout Round, I expect him to be in play to make a solid run at the Championship Round because of how good he is with a spinning rod.”

The rules state that you must pick an angler outside of the Top 40 in the AOY standings in Group A and Group B for your team. Both Bertrand and Jones believe there are a few strong options to choose from.

“When the fish get off the bank, that’s when James Elam shines the most,” Bertrand said. “I think you’re going to see guys catching a lot of fish off the bank on Cayuga, and if that’s the deal, then Elam is a guy who does it extremely well.”

“Brent Chapman performs very well in the late summer, and I feel like he’s due for a breakout event,” Jones said. “He’s had a tough go of it this season, but there’s something to be said for a guy who’s due.”

Jones’ final pick is someone who could have a field day with his favorite bait.

The deadline to build your team at FantasyFishing.com is Saturday, Aug. 6 at 7:30 a.m. ET. Be sure to make your picks before then to take the top spot in your league.