FANTASYFISHING.COM INSIDER: Some Crafty Picks for REDCREST on Grand Lake 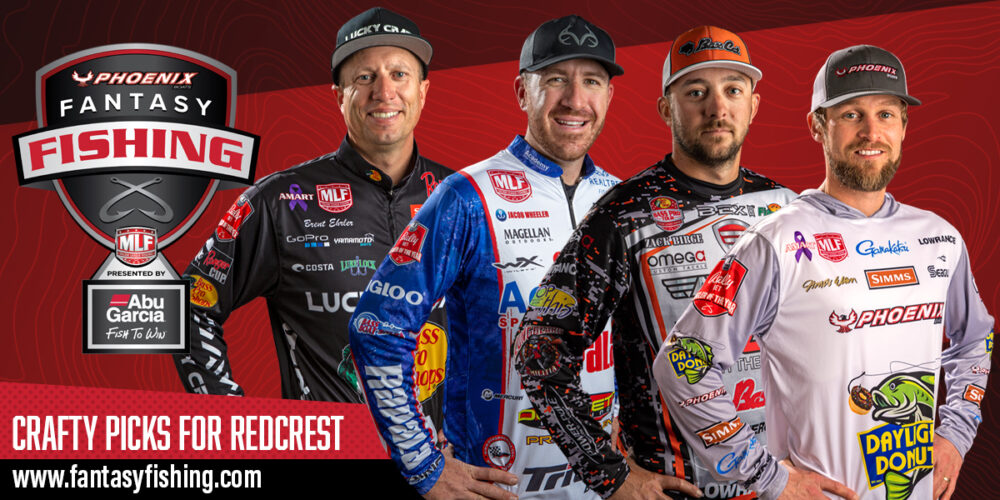 It’s time to make your picks for REDCREST 2022 Presented by Costa on FantasyFishing.com, and this event could be tricky for Phoenix Fantasy Fishing Presented by Abu Garcia players. The field includes 41 of the most successful anglers on the Bass Pro Tour and you get to choose 10 of them – consequently, we can likely expect robust weight totals for many players.

As a writer for MajorLeagueFishing.com, I follow the anglers and trends closely (and hear the insider whispers about factors that might influence the fishing), and am happy to offer my advice for the following picks.

My approach is to always stick with the sport’s superstars, research history on the body of water, and go with anglers on the upswing with recent good tournaments. That strategy has paid off so far this season, as I’m ranked No. 80 overall in Bass Pro Tour Fantasy Fishing. I haven’t had any Top-25 finishes at any stage yet, but steady picks have allowed me to climb the rankings each event and claim bragging rights in a league with my colleagues this season.

The “home lake curse” is a real thing. Anglers who live close to competition waters often find themselves with too many spots to fish or end up chasing history and trying places they have caught them in past events (even back to the years before they hit the big leagues). That said, I expect local knowledge on Grand Lake to be a factor at REDCREST.

There are three Oklahoma anglers fishing the event, and each is worth a spot on your 10-man roster (all three are on mine). Zack Birge, Edwin Evers and James Elam all know Grand Lake very well and it should help them in a tournament where quality bites will be at a premium. REDCREST is setting up as a prespawn event, with low catch numbers but big bass on SCORETRACKER®.

Evers has already proven that he can win a big one at home with his Bassmaster Classic triumph in 2016, and he’s as familiar with Grand Lake as anyone. Birge has a Phoenix BFL and Toyota Series win on the fishery. He’s also fishing well and looks like he’s due for a big win. Elam is steady everywhere he goes, never seems to have a horrible event and is always making Knockout Rounds – his local knowledge can only help at REDCREST.

I live by the same motto every tournament when it comes to my FantasyFishing.com picks: APW (Always Pick Wheeler), for many different reasons. He’s obviously in a league of his own when it comes to his success on the Bass Pro Tour and he rarely has a bad event. A poor showing for Wheeler is still an average or a solid tournament for many other anglers.

Picking Wheeler is a no-brainer and a bit of a defensive move in this fantasy format. He’s undoubtedly picked by just about every fan playing the game and picking him – even if he does poorly – won’t affect your standings very much. But on the flipside, not picking Wheeler when everyone else does could hurt your rankings tremendously.

Ehrler is a Steal

The game rules require one angler to be below 40th in the points for each group, but that’s based on the 2022 season. All of the REDCREST anglers are very good, but some are having slow starts to the new season, and that leaves some very good picks in the lower half.

One of those is Brent Ehrler, who is fresh off a Championship Round appearance at Stage Three but still trying to climb the standings after two uncharacteristically tough events to start the year in Louisiana and Texas. Grand Lake isn’t a perfect fit for the Californian’s fishing style, but he’s fished here and knows how to win a big one as he has a Toyota Series championship and Forrest Wood Cup title.

Ehrler hasn’t won yet on the Bass Pro Tour and he wants another win badly. He’s a solid “wild card” pick.

Roster entry for REDCREST continues until the morning of Day 1 (March 23), don’t miss out on your chance to add to your season-long success. Pick your teams HERE.