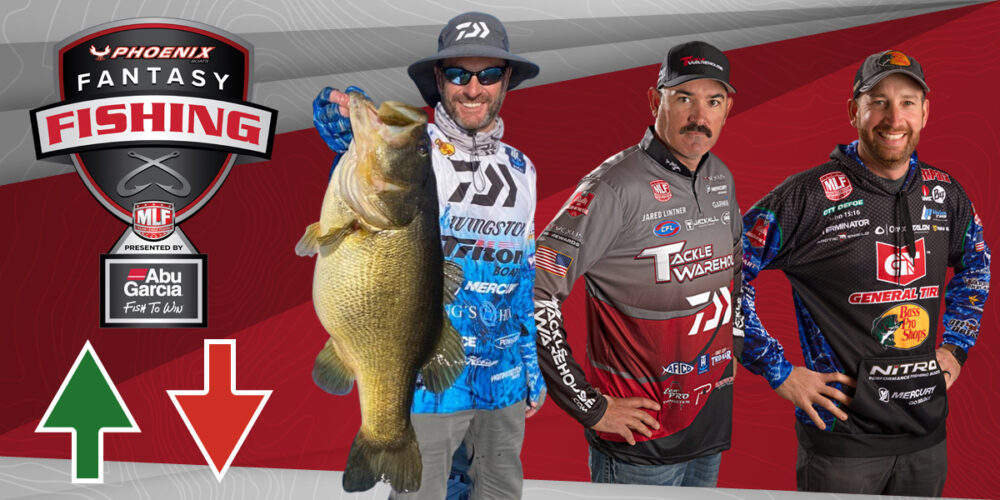 MLF Fantasy Insider, Tyler Brinks, gives a break down of whose stock is rising and falling after one event each on the Bass Pro Tour and Tackle Warehouse Pro Circuit.
February 17, 2022 • Tyler Brinks • Bass Pro Tour

Tournament bass fishing is a game of momentum, and anglers who get on a roll can often carry that into the next event. Ditto fantasy fishing.

With a quick turnaround between stages, roster selection for Toro Stage Two Presented by Grunden’s at Lake Fork, Texas, is already upon us. The 80-angler field can build on their success from northern Louisiana, or try to rebound on another prespawn event with plenty of big-bass potential.

The following three anglers are trending upward and worth a look as you choose your squads this week for Phoenix Fantasy Fishing Presented by Abu Garcia:

Randy Howell – The 2021 Bass Pro Tour season was a tough one for Howell as he finished 74th in Angler of the Year points. The Mercury pro had plenty of room to rise eading into Stage One roster selection, and starting the season off with a sixth-place finish in Louisiana will surely give him some confidence.

Back-to-back record-breaking big bass in the Knockout and Championship rounds (which added 25-8 to his fantasy captains’ totals) didn’t hurt either. The 12-14 behemoth that Howell caught on Bussey Brake will keep him brimming with confidence for the next few events, and might encourage fantasy players to add him to their Group A rosters for Lake Fork.

Jared Lintner – Linter also had a subpar 2021 season, finishing the year 62nd in AOY points. But the new resident of Georgia is fresh off a Top 10 finish to start the season after winning his group and advancing straight to the Championship Round. That should give him a little extra boost going into Lake Fork, making him another pick worth considering in Group A.

Dakota Ebare – Ebare caught just one scorable bass during his first taste of the Bass Pro Tour on the first day at Lake d’Arbonne. Although he didn’t make the Knockout Round, he rallied to finish 23rd in his group on the second day. That’s only part of why the Texas pro is on the rise.

Ebare kicked off the season with a 20th-place finish on the Tackle Warehouse Pro Circuit on Sam Rayburn and finished third in the recent Toyota Series event there as well. Lake Fork is a different animal, but Ebare is fishing well and always does well in Texas.

Those are obviously uncommon finishes for Lucas – while’s he’s trending down, he’s still a threat to win any event.

Ott DeFoe – DeFoe has been so good over the past several years that one average finish sticks out. The Mercury pro still made the Knockout Round to start the season but didn’t catch a scorable bass during that day of fishing, finishing 35th. It’s likely just a minor blip, but compared to his excellent track record, it was below what we’re used to seeing from him.

Dustin Connell – The reigning REDCREST champion has been excellent on the Bass Pro Tour, with Angler of the Year finishes of eighth, sixth and 22nd. He’s also been a hot starter: Connell’s average finish in the first events of the 2019, 2020 and 2021 seasons was fifth.

Connell missed the Knockout Round at Stage One, finishing 61st. That’s contrary to his usual hot start, but Connell will be a strong option for the “wild card” spot in Group B at Lake Fork.