When, why and how light line, small baits are the way to go on Tennessee River, Chickamauga 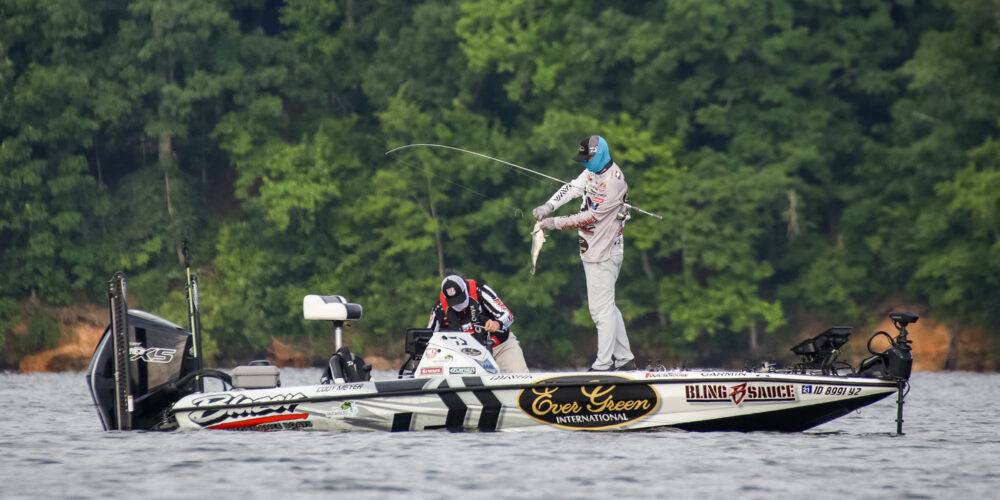 The lakes formed by the Tennessee River represent some of the meccas of the bass fishing world. The simple mention of Guntersville, Pickwick, Kentucky, Chickamauga and the others conjure up visions of big bass.

Another thing synonymous with these lakes is ledge fishing, primarily with big crankbaits, swimbaits, spoons, hair jigs, and various other big ledge-busting baits. But even with those techniques dominating, finesse fishing has a place on the Tennessee River, a fact that was evident at Stage Four on Lake Chickamauga.

Meyer believes finesse fishing is the best way to combat the heavy fishing pressure these lakes attract, and when there’s no current running.

“All of the lakes on the Tennessee River have multiple community holes and places that fish stack up on every year,” he said. “The electronics and mapping have become so good that everyone knows the same spots. Guys are all using side-scanning sonar to search, and they always find the same schools.”

Another critical time to finesse, according to Meyer, is when the current is at a crawl.

“When the current is cranking, you can catch them however you want to,” he said. “Finesse fishing shines when there’s no current, especially when the water is a little more clear. These fish have specific feeding windows when the current is running and the rest of the time, they scatter and suspend more and don’t want to eat.”

These are the situations where Meyer will pick up a spinning rod.

“That’s when I use lighter line,” he said. “I won’t try to force-feed them the bigger stuff. Something like a drop-shot with a light weight looks very natural as it’s drifting along on the shell bars.”

Two of Meyer’s favorite finesse rigs for ledges are the drop-shot and Neko rig. He has a specific approach for when he tries these versus other larger lures.

“I always make a cast or two with something like a big crankbait when I first get lined up on the spot,” Meyer said. “That will get any aggressive fish first before I have to switch to finesse fishing. If I catch one or two on a drop-shot or Neko, I might have the school fired up and will cast back in there with a bigger bait that I can reel faster like a crankbait or swimbait.”

His bait selection for finessing the ledges is primarily the same as what he uses anywhere else in the country.

“It’s the typical finesse worms and stuff like that,” Meyer acknowledged. “I like 5.8 and 6.8 Daiwa Yamamoto Neko Straight (worms). The Neko rig works great on those deeper ledges. I’ll drop-shot with Roboworms and the 4-inch Yamamoto Senko.”

Meyer sees finesse fishing as a necessity on heavily pressured spots and opts to play the numbers game.

“These fish get so much pressure that you have to finesse fish, and I think a lot of guys still resist that at times,” he said. “I’m trying to generate as many bites as I can whether it’s on the Bass Pro Tour in a five-fish format. If you catch enough fish, you should run into some good ones.”