Five Key Things from the Knockout Round on the Harris Chain 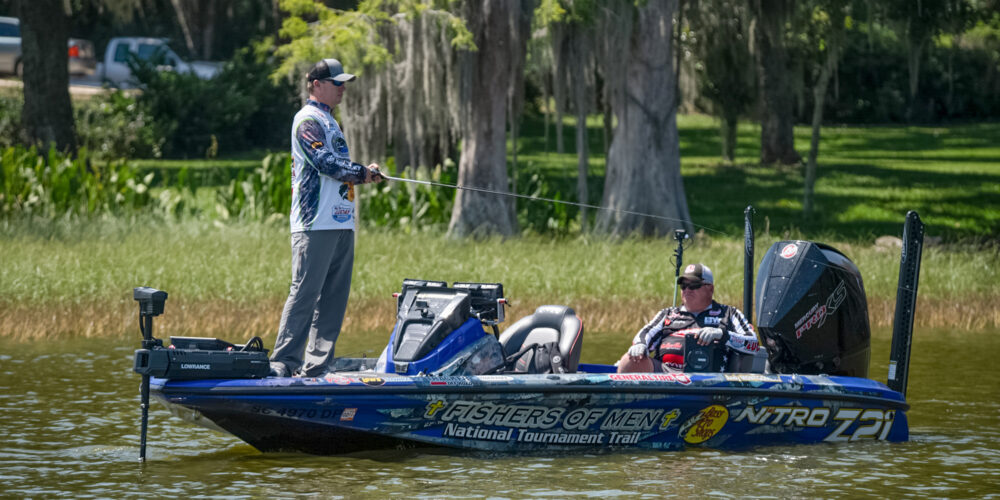 Andy Montgomery is one of five anglers in the final 10 who have primarily fished Lake Harris. Photo by Garrick Dixon. Angler: Andy Montgomery.
May 25, 2021 • Tyler Brinks • Bass Pro Tour

LEESBURG, Fla. – The Knockout Round at the Favorite Fishing Stage Three Presented by Bass Cat Boats on the Harris Chain of Lakes had plenty of fireworks. Fish continued to bite in the Florida heat, and it’s setting up to be an excellent finish when the final 10 anglers return to the water one last time for the Championship Round.

Even with changing conditions from the start of the tournament until the final day, the bite has remained consistent.

There are eight lakes on the Harris Chain and all of them hold plenty of bass and the potential to win a tournament. But many of the pre-tournament predictions pointed at Lake Griffin as the place to be.

Griffin has undoubtedly received some attention this week, but the final 10 anglers will likely split among three different lakes when the Championship Round gets underway.

On “Team Griffin,” the captain is Group A winner, Brett Hite, who put on a ChatterBait clinic to cruise to victory during the Qualifying Rounds. He enjoyed two days off after winning the round and will head back to his prime areas and hope the pile of fish he found is still there.

Lake Harris sent the most anglers to the final day out Knockout Round as half of the 10 remaining anglers got there by fishing these waters (including Group B’s automatic qualifier Bobby Lane).

Michael Neal was the one outlier as he relied on Lake Beauclair and will have it all to himself when he returns to the water.

If you watched MLF NOW! or glanced at SCORETRACKER® Insider, you might have noticed quite a variety in how the anglers are catching their fish. Some of the lures are Florida staples like vibrating jigs, flipping craws and creature baits around grass, and casting lipless crankbaits.

But multiple other techniques have caught fish. Some made sense for Florida, like frogs, buzzbaits, fluke-style plastics, and a Carolina rig. Others looked a little out of place by Florida standards, including drop-shot rigs, Ned rigs, and large glide baits.

Fish catches have been evenly split between periods all week long.

There has been a strong morning bite as anglers either chased the low-light feeding windows or capitalized on the shad spawn. The mid-morning bite during the second period has also been excellent. As the day has worn on, the afternoon bite has been as hot as the Florida sun.

Digging into the catch numbers, there has been no clear-cut best period. They’re catching them all day long on the Harris Chain.

The combined daily totals from each of the three periods over five days of fishing are remarkably close. The anglers placed 552 bass on SCORETRACKER® in the first periods, 559 in the second, and 546 in the closing periods.

Elias is the Last Man Out

This event was the first appearance for Paul Elias in the Knockout Round since joining the Bass Pro Tour. He nearly made the Championship Round as well, finishing ninth.

A 2-5 he caught with five minutes to spare pulled him within 2-6 of Jeff Sprague for the final spot. Still, it’s easily Elias’ best finish over the past three seasons and may provide some momentum going into the next events.

After five days of fishing, the highest daily weight has ranged from Dean Rojas‘ 44-4 during Group A’s second Qualifying Round to Brett Hite’s 83-5 on the opening day. In between, there have been some solid performances, and the eventual winner of this event will have to catch them all day long. A 51-12 total like Brent Chapman’s weight from the Knockout Round might be enough, but it could go considerably higher.