Five Key Things on Day 3 at the Harris Chain 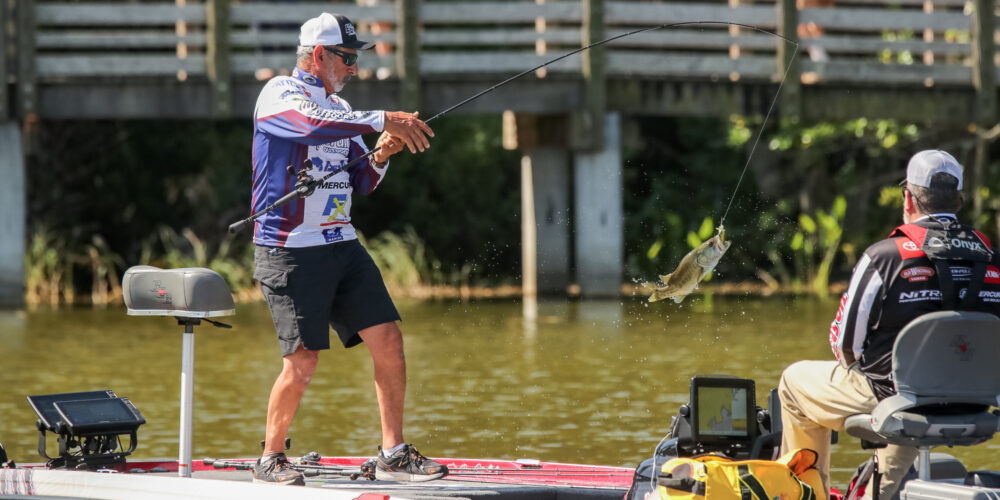 LEESBURG, Fla. – The Favorite Fishing Stage Three Presented by Bass Cat Boats on the Harris Chain of Lakes has been a compelling battle through three days, with plenty of fish being caught and some true Florida giants hitting SCORETRACKER® each day of the event.

Day 3 continued to be the “Brett Hite Show” as he cruised straight to the Championship Round after catching 42 bass for 100 pounds, 7 ounces over two days. Several anglers made big jumps to advance to the Knockout Round, while others faltered and will head home. There was a lot going on on Day 3, but we noticed these five key storylines from Group A’s second Qualifying Day.

A First for Elias

In his legendary 42-year career as a professional angler, Paul Elias has accomplished many things. He “kneeled and reeled” his way to a Bassmaster Classic victory, introduced the world to the Alabama rig with a big win on Lake Guntersville, Alabama, and set the Bassmaster Elite Series weight record on Falcon Lake, Texas.

One thing he hasn’t done, until Sunday, was advance to a Knockout Round. Elias accomplished that after catching 54-8 in two days to settle in sixth place in Group A. No matter where he finishes in the Knockout Round, he will have secured his best finish since joining the Bass Pro Tour.

Arizona and Florida couldn’t be further apart in terms of bodies of water and terrain, but something interesting is happening this week to connect the two states.

Arizona’s Brett Hite has put on quite the show as he easily won the Qualifying Round for Group A and will go straight to the Championship Round. Fellow Grand Canyon State angler Tai Au from the Tackle Warehouse Pro Circuit had a solid start to the tournament yesterday as he finished his first day of fishing in 13th place.

But, there’s even more. Two of the three best daily totals from today were Dean Rojas (44-4) and Josh Bertrand (39-15). The two Arizona pros jumped from 26th to fourth and 24th to eighth, respectively.

The first two days of the tournament included gusty winds and anglers battling to stay put in their primary areas. Not surprisingly, reaction baits like ChatterBaits dominated in the churned-up water.

But the winds died down on Day 3, and the moving-bait bite continued to produce for many anglers. As the week progresses, the heat will approach the mid-90s in central Florida and the winds will lay even flatter. With changing conditions, the remaining anglers may be forced to switch things up if they expect to keep catching fish.

One of the most agonizing moments of the tournament came in the final 10 minutes on Sunday, when Jacob Wheeler lost what appeared to be a good-sized fish at the boat. As dominant as Wheeler has been in his career – he’s a threat to win every time he launches his boat – it’s a story when he doesn’t make a Knockout Round.

Wheeler made a late charge on Sunday but finished 4-3 below the Toro Cut Line. He’s heading home early, but the Bass Pro Tour is headed right to Wheeler’s adopted home lake, Lake Chickamauga (where he already owns a handful of tour-level victories).

There’ll be at least one Pro Circuit angler in the Knockout Round as Kyle Hall advanced. The Texas pro had two consistent days over 20 pounds to finish 16th in Group A with 48-15.

Kyle Cortiana struggled his first day with three bass for 5-11. He found himself in 38th out of 39 anglers before rallying on Day 3. Cortiana boated 12 bass for 31-12 and ended the event in 23rd place. It was a nice run, but he fell just 2 pounds short of advancing.

When Group B gets back on the water, Tai Au (13th) and Spencer Shuffield (37th) will do their best to join Hall in the Knockout Round.