Five Key Things on Day 4 at the Harris Chain 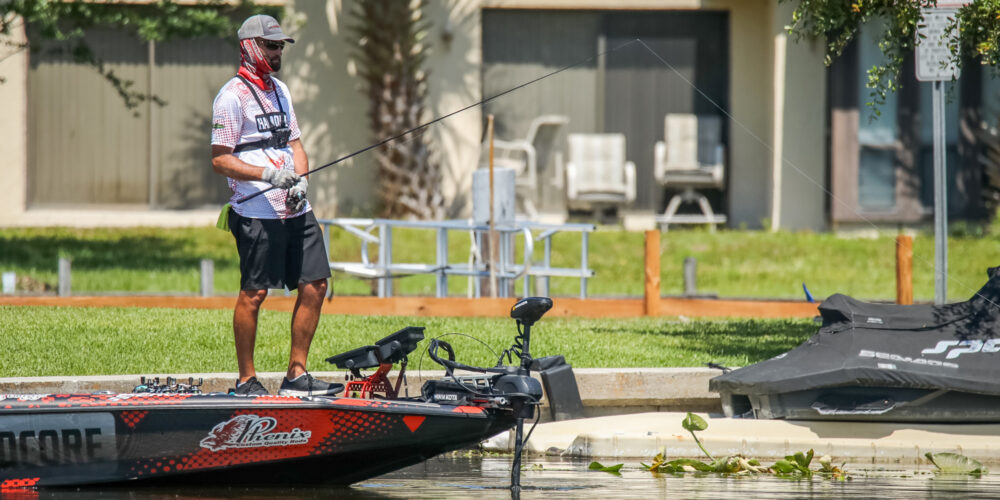 As with all cut days, there were some last-minute heroics, some clutch catches, and a few broken hearts as anglers fell short of qualifying for the Knockout Round. There were some other interesting happenings today and some key things that stood out as we watched MLF NOW!

Going into the day, Bobby Lane held a comfortable lead in Group A of 24 pounds over second-place angler David Walker. It looked as if Lane could catch a few fish and start looking for new areas to fish.

That wasn’t the case, and it wasn’t even Walker pushing Lane – it was Ott DeFoe, who was in 28th place going into the day before catching fire in the first period on Monday.

DeFoe caught 29 bass for 66-4 on the day, which forced Lane to step it up in the afternoon. Although Lane outdistanced DeFoe by a comfortable 24-4 at the end of the day, it was much closer during different points of the day, and certainly made Lane sweat a little during DeFoe’s fast rise.

Aaron Martens’ health battles have been well documented, but despite the drain of his continued treatments, Martens is still fishing and competing this week in Florida.

Although he didn’t advance out of the qualifying rounds, there was a bright spot on Day 4: Martens’ 7-2 bass was the Berkley Big Bass of the day.

What’s It Going to Take?

Looking ahead to the Championship Round, it’s becoming obvious that it will take considerable weight to take home the title. Brett Hite’s 83-5 from his first day of fishing is still the best of the week, but there were other impressive daily totals (Bobby Lane with 68-4 his first day and DeFoe’s 66-4 on Monday).

The question remains: How much weight will it take when all of the remaining anglers are fishing their best stuff and not holding back?

The final 30 minutes of the day provided plenty of fireworks as three anglers scored big catches to get into the top 20. All three (Timmy Horton, Spencer Shuffield, and John Murray) stayed above the Toro Cut Line, advancing to the Knockout Round.

Alabama’s Horton struck big with a 6-8 with a little more than 20 minutes to go. Shuffield jumped into the top 20 with a 5-3 with 14 minutes to go; just one minute before that, Murray’s 2-5 got him safely above the cut line.

While those were all impressive late rallies, the day’s best movement goes to James Watson. He jumped 26th places from 36th to 10th on the day on the strength of a 41-12 day.

Stage Three will see one Tackle Warehouse Pro Circuit angler from each group moving on to the Knockout Round.

Shuffield’s clutch catch in the closing moments was a big story, but he had an impressive day overall. After catching just 5-10 on his first day, he boated 37-8 to jump from 37th place to 16th. He’ll join Kyle Hall in the Knockout Round.

Moving in the other direction was Arizona’s Tai Au, who slid from 13th to 28th after posting just 8-6 on the day. Au has been eliminated but will join the field again at the next event on Lake Chickamauga after qualifying for two straight Bass Pro Tour events via his top finishes on the Tackle Warehouse Pro Circuit.