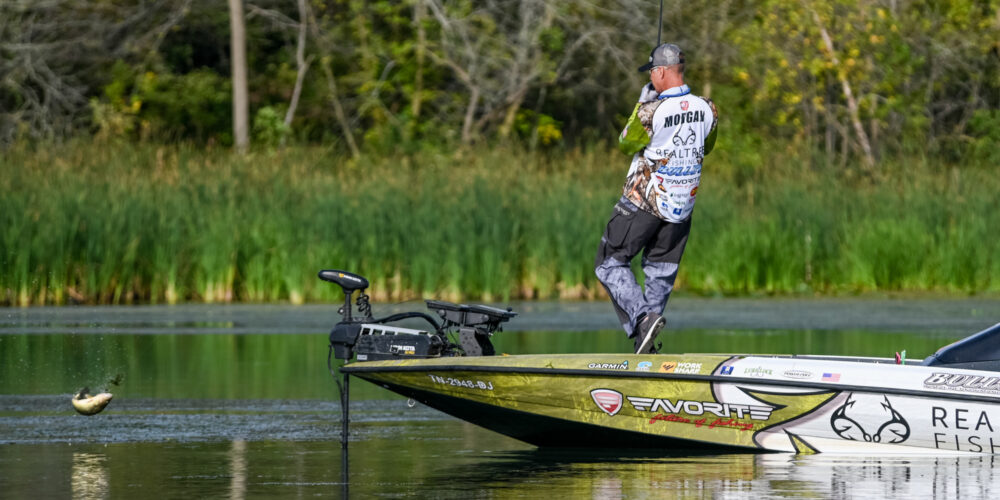 What do you do when you head to a world-class smallmouth bass fishery but still have largemouth in the back of your head? If you’re Bass Pro Tour angler Andy Morgan, you buck the smallmouth trend, take the “road less traveled” and fish for largemouth bass.

Morgan, a three-time Angler of the Year, is a capable smallmouth fisherman to be sure. But he also has a track record of finding quality largemouth and placing well in tournaments most competitors would’ve never thought twice about fishing for green fish.

“Population-wise, largemouth bass aren’t as abundant as smallmouth in many of the northern fisheries,” Morgan admitted. “But that doesn’t mean you can’t catch a lot of quality largemouth and do well in tournaments fishing them, or fishing just for fun.”

Morgan demonstrated that potential at Bass Pro Tour Stage Seven at St. Clair. Morgan ended up ninth overall, had over 90 pounds of largemouth bass, and caught the big fish of the event, a 6-pound, 5-ounce beast.

“At Lake St. Clair, I looked at the forecast and saw on the days I was fishing that the wind was going to be pretty strong,” Morgan said. “I decided to fish my strengths, and the high winds made that decision easier. Instead of battling waves and not fishing my strength, I thought I could be more efficient (fishing for largemouth). It worked out well. I had a 90-pound-plus day during the Knockout Round, could’ve weighed more, but (left my primary area and) went looking for more fish.

“Plus, I caught the big fish of the tournament, a 6-pound, 5-ounce bass. I almost didn’t set the hook. I was expanding my area for the Championship Round and was only occasionally setting the hook. I’ve actually won big bass at a few northern events with a largemouth bass in my career. They’ve all weighed 6 pounds, 5 ounces. But the calm conditions cost me on the final day.”

Fishing largemouth in smallmouth country isn’t as difficult as you may think. Morgan expands his plan to include weeds and rock, and doesn’t just beat the bank.

“Up north, it’s almost always about weeds and rock, and it’s often offshore,” Morgan said. “Find some submerged vegetation, look for the outside weed lines, and look for any irregularities. Find some rocks and weeds mixed together. But, the biggest factor is you have to commit to fish for largemouth in smallmouth waters if you want to catch them. You can’t go half-speed.”

When you’re fishing largemouth cover, precise presentations are critical. Punch a soft plastic into mats or submerged vegetation, and always look for irregularities in the weeds.

“You want to throw (accurately) to the weeds and to the rocks,” Morgan said. “Largemouth hold to those specific locations. Sure, they’re usually a heck of a lot smaller population of fish, but you can often have them all to yourself, and if you fish tournaments, you can pull out top 10s, though it can often bite you, too.”

Morgan prefers to punch or flip when committing to northern largemouth. He feels it’s a high percentage way to hook and land quality fish.

“I want to catch them punching or flipping, whether deep vegetation or mats,” Morgan confirmed. “They’re suckers for a heavy weight and a punching bait. When you get a hit, you lean into them, make the line squeak into that grass. If you don’t hear that squeak, you’ll probably lose the fish.

“You jerk, pin ‘em up, and the bass is covered up in weeds. Just keep winding and throw all that weedy junk in the boat and dig the fish out. If you don’t own them, they’ll own you.”

Morgan’s punching and flipping gear consists of a 7-foot, 11-inch rod from Favorite – stiff,  but not overly stiff, according to Morgan. A pitching and skipping reel from Lew’s, 65-pound braided line, an extra heavy straight-shank flipping hook tied with a snelled knot, and a pegged sinker. His favorite punching bait is the Zoom Z-Craw and in thick cover the Z-Craw Jr. is tops. He’ll also use a 1-ounce Strike King Grass Jig from time to time.

“I’m not saying it’s always smart to fish for largemouth in smallmouth waters during a tournament,” Morgan joked. “The odds aren’t great that you can get a Top 10, especially in the MLF format. But when you find them, you can get to leaning on them and it can be real fun and really productive.”