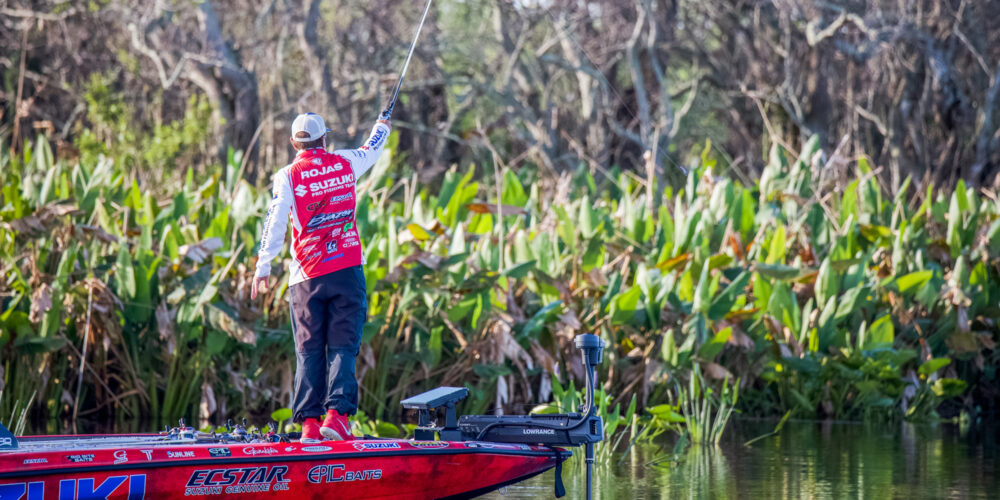 Dean Rojas is known by many fans of the Bass Pro Tour as the frog fishing guy. He’s cast his SPRO Bronzeye Frog into some amazing dense cover and pulled out giant bass with that faux amphibian for years.

“I love to flip and pitch for bass,” Rojas admits. “It’s especially productive in the spring when the bass are up in shallow cover. If you’re not flipping now, you’re likely missing a lot of opportunities to catch bass.”

There are keys to springtime flipping. Lake levels and water temperatures are two of the most important things to note when searching for shallow-water bass.

“During spring, lakes are usually filling up with spring rains,” Rojas says. “Logs, brush, and other cover that has been out of the water is back in. When the water temps are in the mid-50s, the bass will move up shallow and really start to get going.

“By the time water temps are 57 or 58, bass are up shallow, moving around and getting prepped to spawn. Being able to drop a bait right on them with a precise presentation into shallow cover is why flipping is so deadly this time of the year.”

The time of day you choose to fish during the spring can also impact your bass-catching success while flipping.

“What time of day you fish matters, depending on the time of the year, of course,” says Rojas. “In the earlier spring, afternoons are best since the water heats up a bit more. A general guideline for flipping is that from 10 a.m. to 4 p.m. seems to be the best. When the sun is out, the cover you’re flipping to provides shade for the bass. Early morning, or when its really overcast, fish tend to roam more.”

Gear choice is very important for Rojas. He’s not using the heavy-duty broomsticks you might imagine.

“I use my Duckett Rods signature 7-foot 2-inch medium-heavy for pitching and flipping,” Rojas says. “Speed is very critical on the Bass Pro Tour. A bigger rod is not as efficient, in my opinion. I can make more precise presentations with this rod, and if you do catch a big one, you can handle it. It’s really changed my way of thinking about things. Everything that I can do to save time on water and be more efficient and effective, I do. You can use that rod anywhere around the country and catch bass.”

Along with his favorite Duckett rod, Rojas loads his reels with anywhere from 16- to 22-pound Sunline FC Sniper line depending on the cover.

“When it comes to choosing a bait to flip, it all revolves around which size Fighting Frog I’m going to use,” said Rojas. “I helped design the Big Bite Baits Fighting Frog to collapse and get out of the way of the hook when you set it. I’d rather trade a bait for a bass any day of the week.

“They come in 3-, 4-, or 5-inch lengths,” Rojas says. “The 4-inch is my mainstay. My color choices are usually hematoma, black-and-blue sapphire, green pumpkin, or tilapia. I’ll use anywhere from a ⅛- to ½-ounce tungsten weight depending on wind more than anything. If it’s windy, a lightweight makes it harder to control and keep contact. My hook is either a 3/0 or 4/0 EWG Flippin’ Hook.”

Rojas’ number two choice has been a mainstay for him for decades.

“The tube is the other bait I’ve used a lot,” Rojas says. “It was key for me winning the Bass Pro Tour at Smith Lake last year. I always carry a box of tubes. Sometimes, that more subtle fall of the tube is just what the bass want.”

Flipping and pitching is a technique you need to practice to not only become efficient using it, but to gain confidence in its effectiveness.

“Go out and take only your flippin’ stuff and force yourself to find areas to flip and experiment with it,” Rojas advises. “Keep an open mind and go where there’s stuff to flip. You’ll end up catching a lot of bass.”