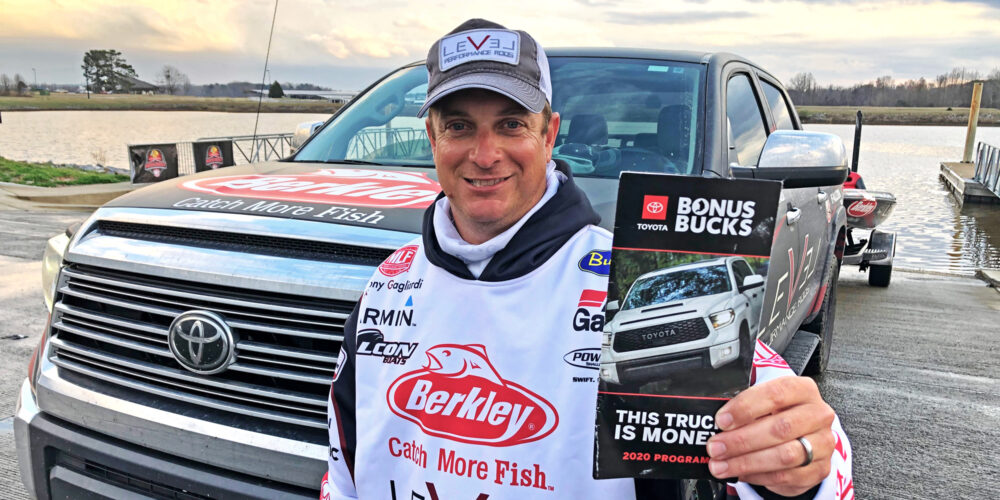 With more than $2 million in career prize money and a mechanical engineering degree from Clemson to his credit, veteran South Carolina pro Anthony Gagliardi is quick to recognize a quality tow vehicle – and owning one that pays cash bonuses to tournament anglers makes it even better.

Known to his buddies simply as “Gags,” he was pleasantly surprised to learn his eighth-place finish at REDCREST 2021 on Lake Eufaula was good enough for $2,500 in Toyota Bonus Bucks.

“This 2018 Tundra I’m driving now is the third one I’ve owned, and I’m not gonna lie, I bought the first one mostly to be eligible to win Bonus Bucks. But man, it’s such a great vehicle, the Bonus Bucks kind of become secondary,” Gagliardi admits.

Asked what he loves most about his Toyota Tundra, he was quick to say its towing power is on par with a diesel, and the comfortable ride it provides across 30,000 miles a year of chasing bass around the U.S. is a treasure too.

“Heck, it’s not just my tournament tow vehicle, it’s the truck I drive every day to take my kids to school, and when I’m due for an oil change or service the people at Jim Hudson Toyota in Columbia are so incredibly friendly and professional it’s just awesome,” Gags grins.

“Surprised, grateful, and absolutely thrilled to learn I’d won a Bonus Bucks check. I mean really, if you fish tournaments, I don’t know why you’d buy any other brand of tow vehicle but a Tundra,” he concluded.

You too can cash-in on Toyota Bonus Bucks. You just have to own or lease a 2017 or newer Toyota Truck, sign up free for Bonus Bucks, and be the highest finishing registered participant in one of the hundreds of tournaments supported by the Program. To learn more, please visit www.toyotafishing.com.