Grigsby Ready to Revisit a Championship History on Sam Rayburn 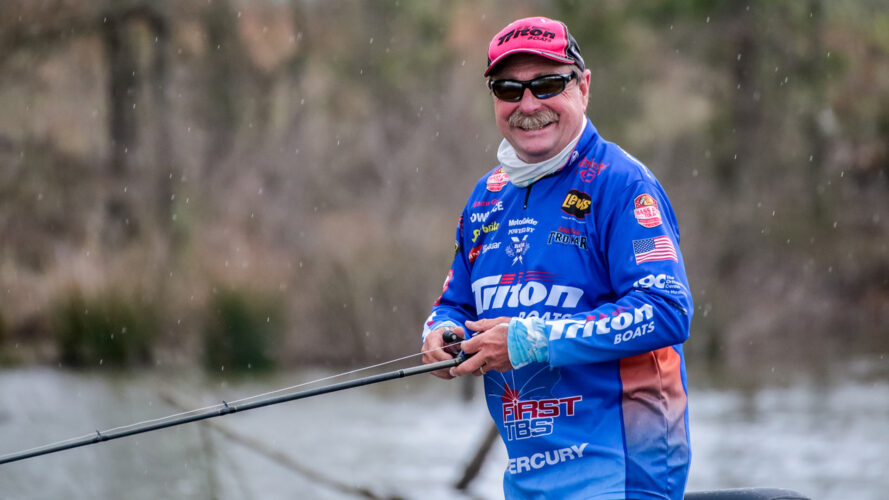 To say that MLF pro Shaw Grigsby is anxious to kick off the 2021 Bass Pro Tour season at Sam Rayburn Reservoir in east Texas is an understatement. Entering his 43rd season as a full-time pro, Grigsby harkens back to his earliest memories of Sam Rayburn – the early 1980s – and the role that this big-bass haven played in launching his pro career.

“Oh man, Rayburn was a tremendous lake back in those days,” Grigsby says. “The first tournament I fished there, I believe I finished near the bottom of the leaderboard, but then I ended up having my first three professional wins there.”

Grigsby indeed finished 198th at the 1985 Texas Invitational on Rayburn, but then won the next three events he fished there (1988, 1990 and 1992 Texas Invitationals). And there began a love affair between the kid from the Sunshine State and the best bass fishery that the Lone Star State had to offer.

“I really love Rayburn,” Grigsby admits with a laugh. “What’s not to love? It holds big bass, and lots of them. It’s loaded with hydrilla and other vegetation, and really fits my fishing style from Florida. It’s one of those textbook lakes, something you’d read about in a magazine. You can figure fish out and you’re able to pattern them.

Prior to becoming a household name via his 21-year run with his popular One More Cast with Shaw Grigsby TV show, Grigsby was one of the pioneers of sight fishing for spawning bass. He was so far ahead of much of his competition that it paid off handsomely with trophies and winner’s checks.

“In the early part of my career, specifically on Rayburn, the wins and success were all about sight fishing,” Grigsby admits. “Not as many people were sight fishing then, so it was a huge advantage for me. We’d fish Rayburn in March, the bass were usually up on the beds, but could be in the grass, too. I could mark several bass on beds, come back, and pick them off. Then, I’d go fish the grass ledges to either fill out a limit or upgrade.

Under the Bass Pro Tour format – where every fish over 2 pounds counts – sitting on five bass sight fishing all day isn’t necessarily the most practical way to approach Rayburn for a win. But Grisby still plans to sight fish at the 2021 season kickoff.

“A lot depends on timing, air temps and water temps, but no matter what, sight fishing will be a player for me at Rayburn this year,” Grigsby says. “The big females can sure be finicky at times, and it’s stunning how fast they can move from shallow to the grass on this lake. Nothing has changed in how to sight fish properly: Male bass protect the beds, but those big females are so finicky. As an angler, you have to define quickly which bass are likely to be caught.”

The Basics are Still the Basics (but Faster)

Grigsby says that the basic rules of sight fishing still apply in the MLF format, but with a heightened awareness of time that forces an angler to be extra attentive to small cues from the fish he’s targeting.

“The first thing is their attitude: Did they take off when you approached? Did they come back quickly?” Grisby asks. “I like when they’re aggressive. Often, the male will push the female off the bed, but you want the aggressive female, the one that returns and seems agitated at your bait. Like always, you’ll need to see where you are on the SCORETRACKER® before you decide to take a lot of time fishing for a real lethargic giant. Having the SCORETRACKER® really makes you make your decision more quickly.”

Knowing that the Bass Pro Tour roster includes a hearty list of skilled sight fishermen, Grigsby expects to rely on a diverse approach and a mixed bag of baits at Stage One.

“It’s about catching lots of those 2- to 5-pounders,” he says. “If I have a couple big ones on beds, I want to catch them right away. But if I spook one and leave it, I know the next boat will come in and get them. The hardest part now is managing your fishing. (You have to) figure out which will bite quickest, Power-Pole down and make that first cast count.”

Grigsby expects to use an assortment of soft plastics like Rage Bugs, Rage Lizards, Caffeine Shads, small tubes, an Ocho, and even a drop-shot at Rayburn. Add a mixed bag of Strike King Thunder Crickets, Red Eye Shads, and a KVD jerkbait, and the Mercury pro believes that he has a well-rounded toolbox for east Texas in early March.

“I’ll be looking for big ones to sight fish with my trolling motor on high, and I’ll use the moving baits to pick off bass as I’m looking for the giants,” he says. “I’ll probably be throwing that Thunder Cricket the most for my moving bait. I was late to the game with the vibrating jig. I was given a vibrating jig about two years prior to when guys started winning with them.

“I remember looking at it, wondering how the blade was going to work, and how it would interfere with hook ups. I never tied it on. Then, guys start catching a ton of bass with them. I said ‘Doggone, I have one of those!’ and you bet I tied it on. I was a little late on that one.”

Although Sam Rayburn Reservoir has provided generously for Grigsby throughout his career, there’s one more thing that he’d dearly love to leave Jasper, Texas with at the end of Stage One.

“I have yet to win on the Bass Pro Tour or an MLF Cup,” he says. “I’ve been in the running, but never won. I’ve won at every other level else I’ve fished. I’d love to win (an MLF tournament), that’s my ultimate goal. I always think I have an opportunity to win on Rayburn. We could see the record big fish for the Bass Pro Tour caught here – it’s rare to be there this time of year and not see a 10- to 13-pound bass on a bed. I’m excited to be at one of the best lakes in the country at the best time of the year for really big bass.”