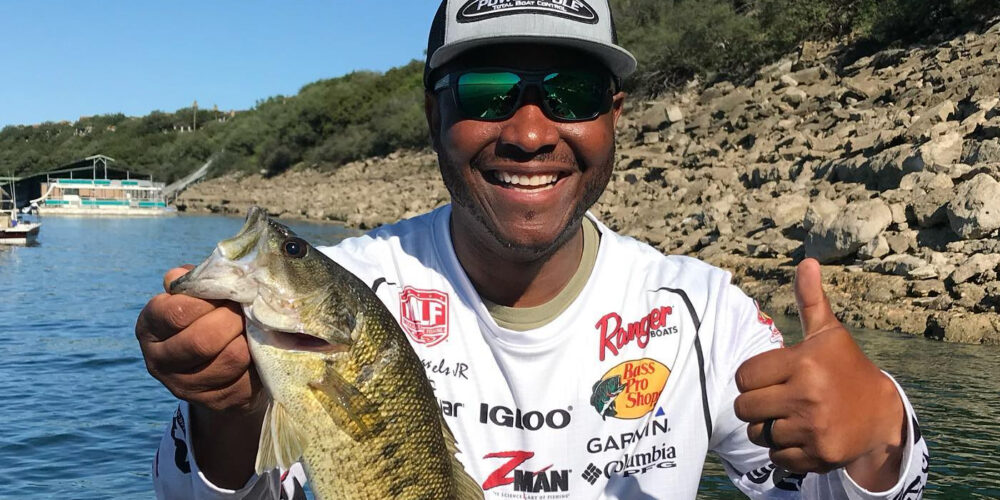 Mark Daniels Jr. added this scorable Guadalupe bass to SCORETRACKER® during one of his qualifying days.
May 4, 2021 • Steve Bardin • Bass Pro Tour

AUSTIN, Texas – If you’re checking SCORETRACKER® Insider this week, you may notice a few “smallmouth” or “spotted bass” being entered by MLF officials. These entries are actually Guadalupe bass (Micropterus treculli) – MLF co-founder Gary Klein says he specifically wrote the rules for the Bass Pro Tour to include these regional bass species by including that ”a scorable fish is any Black Bass (Micropterus) species.”

Guadalupe bass are a unique black bass species found only within the Lone Star State, and more specifically a region of Central Texas known as the Edwards Plateau. Here, these fish are native in the Colorado, Guadalupe, Llano and San Marcos rivers, along with their tributary streams and creeks.

Guadalupe bass differ from smallmouth and spotted bass by distinctive black lateral diamond blotches on their sides and rows of spots that form stripes on their belly. They can be distinguished from largemouth bass by their upper jawbone not extending past their eye. They are typically long and slender fish, able to handle the currents of streams, creeks and rivers they prefer to inhabit.

Guadalupe are considered sister species to spotted bass based on DNA analysis and will hybridize with both smallmouth and spotted bass.

Due to this ability to hybridize with other bass species, pure Guadalupe bass declined greatly through the 1970s and 1980s as both smallmouth and spotted bass were introduced into Central Texas fisheries. The Texas Parks and Wildlife Division (TPWD) launched a restoration and conservation plan in 1991 to halt this decline and preserve the purity of the official State Fish of Texas.

Today, Guadalupe bass have been restored in 14 Central Texas creeks and rivers and can also be found in lakes including Buchana, LBJ, Inks, and of course Travis. One of the tributaries of Lake Travis is the Pedernales River which is home to genetically pure Guadalupe bass and is considered the ”stronghold of Guadalupe conservation” by Tim Birdsong.

It’s rare for these fish to exceed 1 1/2 pounds in the lake, but the state record is 3.71 pounds so there certainly is the potential for scorable Guadalupe bass to continue to show up throughout the week.