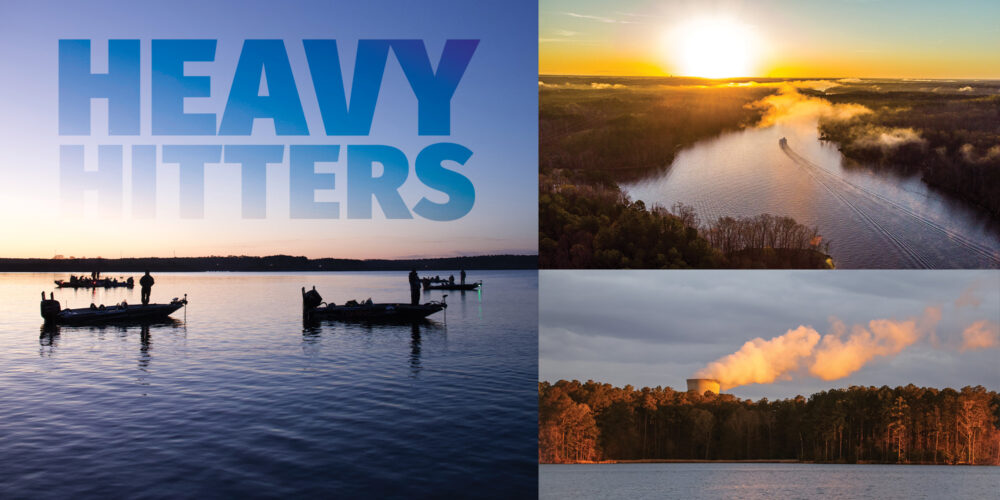 RALEIGH, N.C. – MLF will be back in North Carolina for the first time since 2019 for the 2021 edition of General Tire Heavy Hitters Presented by Bass Pro Shops (April 9-14). Forty anglers will fish on Falls Lake and Jordan Lake for two days apiece, hoping to advance on to the Knockout and Championship Rounds on Shearon Harris Reservoir outside of Raleigh in search of giant Tarheel State bass.

All three fisheries offer different opportunities to catch a big payday, and MLF analyst Marty Stone believes that it won’t take long for the field to unlock the secrets of each one.

Fast forward two years and MLF is back for a second crack at the three lakes. However, Stone warns that if the 40 pros try to fish these lakes like they did in 2019, they might be in for a rude awakening.

The Jist on Jordan

Jordan Lake will host Group A’s two qualifying days on Day 1 and 3 of competition. There are plenty of anglers in the field of 20 who experienced just how impressive the fish in the 13,900 acres of Jordan can be. However, Stone says that the pros can’t rely on their 2019 experience a whole lot considering the drastic change in water level.

“When we were here in 2019, the lake was about 5 feet above full pool, which is prime fishing for this body of water,” Stone said. “The water level this week is below full pool, so these guys can’t really go off of where they caught them in the past. In 2019, the flooded brush was a big player, but that won’t be there this time around. Because of that, vegetation—mainly water willow and laydowns—are going to matter a lot more than they did in 2019.”

Weekend five-fish-limit tournaments on Jordan this year have taken around 30 to 35 pounds to win. While those are impressive bags, Stone admits that those numbers are only that high when you can catch five fish on Jordan. Easier said than done in 2021.

“I think a majority of our anglers are going to struggle to catch five scorable bass,” Stone predicted. “The good news is, there are some giants in this lake, so you may not need a lot of fish to be high up on SCORETRACKER®.”

As for how to catch ‘em, it should be all about sight fishing on Jordan, if the weather cooperates.

“Sight fishing is going to be huge,” Stone said. “Bright and sunny days are going to make it tough, especially with all the pollen in the water. But if we get some cloudy and windy days, the whole lake starts to fire. The weather and the water level are the two biggest factors on Jordan.”

Group B will have the 12,000 surface acres of Falls Lake all to themselves for their two days of competition. Much like Jordan, water level will be a key factor.

“The water level is much lower on Falls than it was in 2019,” Stone said. “Guys had tons of success in 2019 above the Cheek Road bridge thanks to the high water levels. Now, a lot of that area only has 2 to 6 inches of water in it, and it’s just not enough. If they want to fish up there in that river, anglers are going to have to work to find that water that is around 8 inches to 1.5 feet with cover, and it’s not easy.”

Stone analyzes that water willow and laydowns will be important, and that there are some fish to be caught on riprap if the clouds and wind come into play. But like Jordan, Falls is going to be about sight fishing for fish on beds.

Big swimbaits, wacky worms, swim jigs, buzzbaits, crankbaits and of course, sight fishing will all be key baits and techniques on Falls. As for what to expect to bite those baits, Stone has high hopes for big weights.

“I think it’s going to take a fish weighing more than 7 pounds to win Big Bass for each day of competition on Falls and Jordan,” Stone said. “I wouldn’t be surprised if it took an 8- or 9-pounder one day either.”

The 4,151-acre nuclear power plant lake will host the Knockout and Championship Rounds. Stone admits that the slot-limit lake has been tough on local tournaments the past couple of months due to the record cold much of the country experienced in February.

“There was an extreme shad kill because of the abnormally cold temperatures,” Stone explained. “Because of that, the bass gorged themselves on dying shad and they haven’t fed as much in February and March. It will be interesting to see just how hungry these fish are now that it’s April.”

All of the hyrdilla and much of the primrose will be gone, so Stone predicts the anglers will turn their focus to laydowns, pine trees and other shallow cover to find their fish. The cold snap has pushed back the spawn on this reservoir, but Stone believes we might see the first wave of fish come up to begin their spawn in the next few days. If that’s the case, Stone says we could be in for an exciting couple of rounds.

“During the spawn, I would put this lake up against any other in the country,” Stone shared. “You can spend your whole morning in one pocket, catch all the fish you think are in there, then come back that afternoon and there will be all new fish. We’ll see during the Knockout Round if this tournament turns into a fishing or sight-fishing event. Expect 5-pound bucks and 7- to 10-pound females on this lake.”