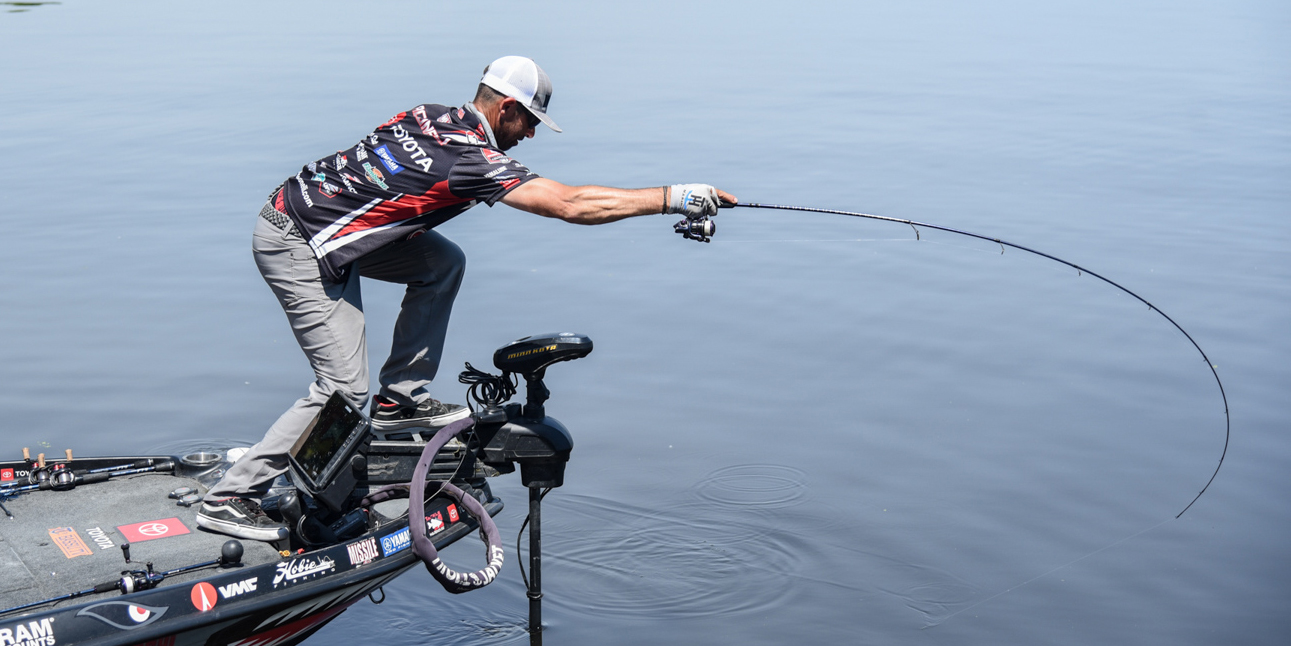 Mike Iaconelli stretched his Elimination Round lead for a comfortable win on Lake Winnebago. Photo by Garrick Dixon

NEENAH, Wis. – Mike Iaconelli made it look easy today at the Bass Pro Tour Evinrude Stage Eight Presented by Tracker Off Road, easily outdistancing the field in the first Elimination Round on Lake Winnebago.

As is the case during all Elimination Rounds, there was plenty of drama at the end of the day. But instead of just fighting to fish one more day, it centered on the battle for Points Champion and the last remaining REDCREST spots.

Much of that drama will continue tomorrow as Group B takes their turn.

The bite continued to get tougher on Winnebago as 901 pounds were brought in, a 145-pound drop from yesterday’s catch. We’ll see how that affects Group B as the tournament spends its final day here before moving to Lake Butte des Morts for the Knockout Round.

Iaconelli Figures it Out

Iaconelli did his best to reach the 100-pound mark, but he fell just short. In today’s closing moments, the New Jersey pro was fishing like an angler desperately trying to survive the cut instead of someone with a massive lead over the rest of the field.

“I was shooting for 100 pounds, that was a real goal for today,” Iaconelli admitted. “But, I’m relieved because this means I have officially made the REDCREST.”

Iaconelli entered the event in 20th place and did what he needed to do on Winnebago to guarantee his spot in the championship. His 37 fish for 57 pounds, 2 ounces for the day was by far the best, and he did most of his damage with a finesse rig.

It was the first time this year that Iaconelli found himself in the lead after a round.

Michael Neal and Kevin VanDam have had vastly different seasons. Neal has ridden consistency all year to a current third placement in points. VanDam, on the other hand, has been uncharacteristically quiet until the tail end of the season.

Differences aside, their totals after the Elimination Round were nearly identical, with Neal in second with 85-3 and VanDam just one ounce less for third place.

Neal came into Stage Eight with an outside shot at the Points Championship, but that window has closed due to Edwin Evers’ finish. VanDam is in a great position to qualify for the fourth and final cup – the Summit Cup to be held later this year.

Evers Will Have to Wait it Out

Going into this event, Edwin Evers had a slim three-point lead over Jeff Sprague for the title of 2019 Bass Pro Tour Points Champion. He finished today in 21st place, meaning he will have to wait until Sprague competes tomorrow to learn his fate.

Once competition ended, Evers was visibly disappointed in his performance this week: “I did all I can do, now I’ll have to see how Jeff does tomorrow.”

JT Kenney picked up on this on the MLF NOW! live stream after time ran out.

“I can hear the frustration in his voice,” Kenney observed. “That’s gonna be tough for him to watch all day tomorrow to see how Sprague does.”

Daniels Rises to the Occasion

Mark Daniels, Jr. knew he had work to do here in Wisconsin to qualify for REDCREST. He was in 36th place just 11 points out of the last spot before the start of Stage Eight.

After Tuesday’s Shotgun Round, he was in 25th place, but a solid 16 fish performance for 33-13 ounces rocketed him to 14th. This keeps his hopes alive for the season-ending championship.

Group B will return to Winnebago tomorrow to compete in the second Elimination Round. The weather forecast calls for another chance of afternoon thunderstorms, a 40-percent chance of rain, and winds out of the east at 5 to 10 miles per hour.

Elimination Round 1 daily awards were:

Friday starts the Elimination Round for Group B, and the Top 20 anglers will join the Top 20 from today for Saturday’s Knockout Round. Weights will be zeroed, making the Knockout a one-day scramble. The Top 10 anglers in the Knockout Round will advance to the Championship Round on Sunday, June 30th.

Competition continues on Friday at 7 a.m. CT, with live, official scoring available via SCORETRACKER® on MajorLeagueFishing.com and on the MLF app. The MLF NOW! live stream begins at 9:30 a.m. CT with Chad McKee, JT Kenney, Marty Stone, and Natalie Dillon.

The Postgame Show Presented by Berkley will begin at approximately 4:30 p.m CT. If you’re in the area, come see us at Shattuck Middle School in Neenah.