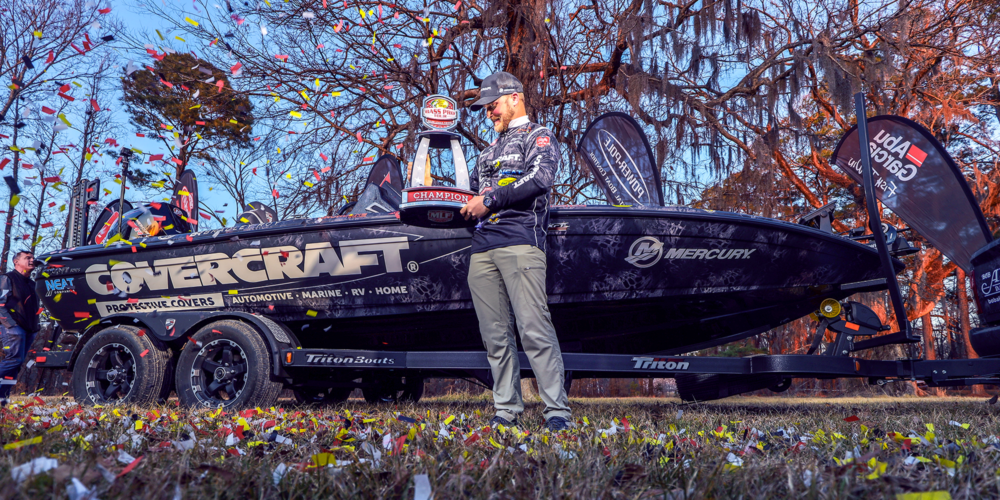 Mercury Pro Team angler Bradley Roy is by no means an elder statesman on the Bass Pro Tour, but at 31 he’s already fished 12 seasons as a tour-level professional. The Mercury pro hadn’t notched a tour-level win yet heading into 2022, but that all changed at Stage One of the 2022 Bass Pro Tour season in northern Louisiana.

Roy took home the win in what many pundits consider to be one of the toughest (but most interesting)  tournaments witnessed in years. Unforgiving cold fronts, stubborn Florida-strain bass and three separate bodies of water challenged 10 anglers who made it to the Championship Round on Bussey Brake Lake.

Roy’s keys to his win weren’t really a lure or presentation on the final day – he flipped and pitched just like most of the rest of the Top 10. The difference-makers, according to Roy, were pressure management and basic tournament-bass-fishing survival instincts that he’s developed since he started competing on tour since he was 19.

“For me all week was about survival: just working with what’s available and doing what you had to do to get through,” Roy admitted. “Sometimes you get it completely wrong, and sometimes right. I always try to be consistent because I have to make a living. I get a bite and start there, hopefully things come together.”

Moving From One Round to the Next

Roy’s gameplan was based primarily on advancing from one round to the other. He’s made multiple Knockout Rounds and a handful of Championship Rounds, so figuring out how to consistently stay in contention is something the Covercraft pro has become adept at over the years.

“I never laid eyes on Caney or Bussey until practice,” Roy admitted. “I did a drive through before the cutoff for D’Arbonne. I basically did what I’ve done my entire career: try to analyze the situation and use my best educated guess as far as how and where to fish.”

Finesse worms got Roy enough bites on Lake D’Arbonne to make it out of the Qualifying Round. It was a little more complicated on Caney Creek for the Knockout Round.

“I knew Caney had grass, and was a clear-water fishery, so I just kind of rolled with what it had to give me,” Roy said. “We had a gusty southwest wind on the day of the (Knockout Round). Florida bass love to be in grass and you can often get them with lipless crankbaits. I fed it to them, they bit and I developed my day as it went.”

The Land of Giants

Bussey Brake was an unknown to most of the field before Stage One, and anglers were afforded just a four-hour ride-around in practice to become familiar with the fishery. The fishing started slowly in the Championship Round, but it quickly became apparent that big fish were present as Bryan Thrift landed a 9-3 in the first period to set the pace for the event.

Roy was fishing within sight of Thrift and watched it all go down as the North Carolina pro took early control of the event. That gave Roy confidence that he was in the right area.

“I knew I was around fish because I was seeing what he was catching,” Roy said. “I never had a thought in my mind to leave because the area looked so good, and then I started catching some as well.”

Roy felt good about where he sat on SCORETRACKER® when the final period started, since he held the lead over Thrift and was still getting bites.

“I had it in my mind that I needed 40 pounds to win. and with the quality of fish there, I was thinking three more fish would do it,” Roy said. “It’s crazy how fast time ticks away, and I started thinking I might need two more bites. Then just one, but I knew I’d have to catch more to win.”

While Roy was struggling, Thrift was as well – however, the rest of the field was closing the gap with big catches of their own. Roy has experienced the feeling of being chased in previous Bass Pro Tour and Cup events, but this was more intense. Knowing what other anglers have at all times is a blessing and a curse for the anglers competing, and it compounded Roy’s stress.

“It’s usually one or two guys that have a shot at catching you, but it seemed like seven guys were right there with needing one more fish to catch me,” Roy admitted. “When I heard the call of the 12-14 from Randy, I breathed a sigh of relief because he was so far back. But that also told me that the big fish were biting and any of the other guys could catch a big one and beat me with one flip.

“The last part of the third period was torture, I was holding my breath with every cast. It was so tense knowing those 10-pound plus fish live there and were being caught. Anybody within 10 pounds really had a chance to catch me.”

Roy went the final three hours without a scorable bass and sweated it out until time expired.

“The stress of the final period probably took years off of my life knowing I was on the brink of my first tour-level win and not getting bites,” he joked. “After all the bass I’ve caught in my life, I felt like I couldn’t get another in the boat. I usually fish very free, but I’ve never been more tense fishing in my life and was missing pitches and flips that I usually make every time.”

During his postgame interview after accepting the winner’s trophy, Roy referred to the “multi-layer stress” that comes along with a Bass Pro Tour event.

“I’m not saying this just because I won, but the stress of fishing the MLF format and splitting it up over three bodies of water is really underrated,” Roy said. “It’s amazingly challenging. One plan doesn’t flow into the other, you need three separate plans and to create them as you go.

“This win is huge for me. I’ve had a good career so far with great support with sponsors, family and friends, but the win validates all the confidence and trust they’ve had in me. It’s the culmination of everything I’ve worked for and to see it come together. I see Wheeler, Thrift, Jordan Lee win, then they keep on winning and are usually near the top. They’re closers. They had to get their first wins too – now, they just win. I’m looking forward to more success in my future now that I’m confident in knowing I can win against the best.”