Jones Cruises on Mille Lacs, Wheeler One Day Away from Bally Bet AOY 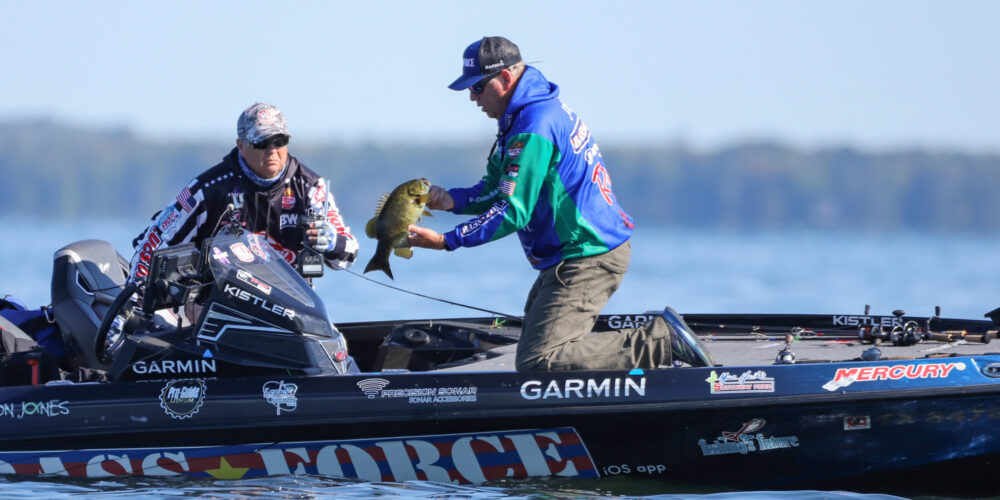 ONAMIA, Minn. – Coming into Bally Bet Stage Seven Presented by Minn Kota, Texas pro Alton Jones was sitting fourth in the Bally Bet Angler of the Year race, fishing as well as he has in years and oozing with confidence in what he had found in practice on Mille Lacs Lake. He was also a little unsure if that confidence would show in his results.

Turns out that his confidence was well founded; Jones racked up 25 smallmouth for 92 pounds, 13 ounces, a runaway day that put him 27 pounds ahead of second-place finisher Dustin Connell at the end of the first Qualifying Day of the final regular-season event.

“I had a good practice, but that doesn’t always translate to having a good tournament,” Jones admitted. “Some of the best tournament finishes in my career were after bad practices. But, so far, the good practice this week has translated to a good start to the tournament.”

Jones tallied 44–5 of smallmouth in the first period alone. Even if he hadn’t caught a fish for the rest of the day, that total would have put him in 11th place in Group B competition. But Jones didn’t falter on the second and third periods, continuing to pile smallmouth on SCORETRACKER® all day long.

Jones is already looking ahead to his next day on the water, thinking of what it will take to earn the automatic qualification to the Championship Round.

“I was able to move to a lot of places and get bit today and have some other stuff I haven’t been to,” Jones said. “I feel like I have a strong enough lead that I can try to win the round (Tuesday). There’s a lot of strategy involved with that because if someone passes you, you can burn a lot of fish and might not even make it through the Knockout Round.”

After a banner day of fishing, Jones was thrilled with his results.

“It’s humbling when you have a day like this,” he said. “I’m very pleased with the day and also very thankful. Now, all I have to do is go ahead and try to win the round.”

After one day of fishing, Connell sits in second place with 17 bass for 65-13. But first, he’ll have to advance to the Knockout Round.

“I’m in second place and that’s a good place to be, but I’d love to be in first and advance to right to the Championship Round,” Connell said.

Reigning Bally Bet Angler of the Year Wheeler came into Mille Lacs with a 65-point lead over Jordan Lee. Lee did what he needed to do on Day 1, finishing fifth in Group A. However, Wheeler also did his part and all but sealed his title after finishing the day third in his group with 17 fish for 58-13. Barring a significant setback, Wheeler will advance to the Knockout Round and secure the title when he completes his second day of fishing on Tuesday.

Bally Bet Stage Seven Presented by Minn Kota continues on Monday as Group A returns to Mille Lacs Lake. The 40 pros will fish for a chance to advance to the Knockout Round, with the winner of the group moving directly to the Championship Round. Fans can catch all of the action on MLF NOW! beginning at 7:45 a.m. CT on MajorLeagueFishing.com or the MLF app.