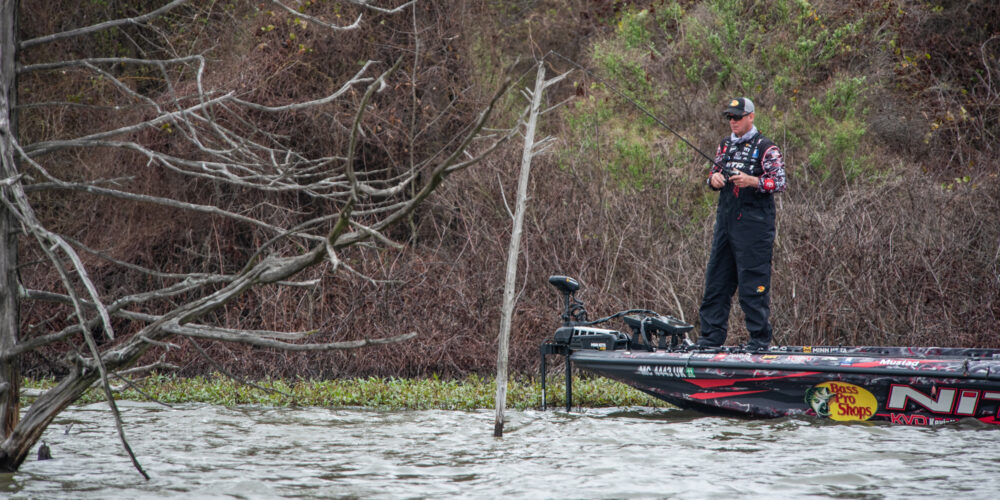 Going into Lake Fork in the middle of March for the third Bass Pro Tour event of the season, I had one thing on my mind: fishing pressure. Lake Fork is a world-renowned destination fishery, and as a result, it’s covered up with anglers seven days a week.

I’ve fished all over the country – Kentucky Lake, Guntersville, Okeechobee – and trust me, none of them can hold a candle to Lake Fork in terms of fishing pressure. Other fisheries get a lot of pressure too, but they’re much larger, so it helps absorb that pressure a little bit.

Lake Fork is just not that big, given the immense pressure it receives.

Playing into my fishing pressure concerns was that I was fishing in Group B on Saturday. Not only would Group A have a shot at it before me, but Saturday is the peak day for fishing pressure on Lake Fork. Given that, I built my strategy at Fork to work around fishing pressure and I kept the following in mind during practice:

Off to a Slow Start on Day 1

After two days of practice, I rigged up for both fishing shallow and fishing offshore. I was leaning toward the offshore game, but I had found one solid shallow place way up in the north end of the lake that was a pain to get to, which was a good thing. What really drew me to the shallow plan in the tournament was our 30-minute ride through.

The area was a mile-and-a-half idle to get into: perfect use of my ride through time to get to unpressured water.

That plan sounded great until I actually got to my area on Saturday morning and found it completely roiled up from wind. I knew the wind direction was blowing right in there on Friday, but I didn’t think it was bad enough to jack the water up like it did. The water was muddier and the little mats of vegetation where I had gotten bites in practice were all blown up on the bank.

After spending my ride-through time to get in there, I was committed. I stayed with it for an hour – without a bite.

This has been my ongoing theme for 2020: I always start the event on a piece of water that has been drastically changed by the conditions. I get bogged down with a bad start and then have to spend the second half of the day scratching and scrambling my way back up SCORETRACKER®.

After scratching at my first spot, I ran down the lake to another pocket to begin my scramble. This pocket was easier to access off the main lake, but since the water was up, it had a lot of super-skinny flooded shoreline cover that was tricky to reach.

The fish were spawning ultra-shallow: I’m talking in 8 to 12 inches. I couldn’t see them because they were buried back in behind flooded grass and bushes. Getting a lure to them required some tricky casting work.

My two best baits were a Strike King Sexy Frog and a Strike King Rodent. I skipped the frog way back under overhanging brush and docks, which resulted in some epic topwater bites. I rigged the Rodent on a light weight and pitched it in behind little flooded bushes and into holes in the matted vegetation.

After catching just two scorable bass in the first period, I caught 10 more scorable bass over the next two periods for nearly 40 pounds of bass on the day. I ended the day in seventh, proud of the comeback from yet another dismal first-period start.

Looking to Add on Day 2

On Day 2, I headed straight back to the pocket where I caught them the first day. I felt there were plenty of fish in the area to make the cut. When I got there, I noticed the water had dropped maybe an inch and the water temp had dropped a degree or two as well; however, I figured neither variable was enough to change the fish. Boy, was I wrong about that!

The pocket just wasn’t the same the second day. I fished in there for several hours and only caught two scorable bass; the rest were non-scorable males. I don’t know what happened. All I can guess is on the first day the females were moving into spawn and were more vulnerable in that warmer, higher water.

On the second day, they had either locked completely down on beds or had vacated the area completely, leaving just the males to defend the beds. No matter what it was, I was falling down SCORETRACKER® like a rock!

Once I fell near the 20th-place cut line, I knew I had to bail on that pocket or it was going to really hang me out to dry. With just two hours left in the day, I pulled up the stakes and made a move to the south end of the lake to try a jerkbait in some offshore drains. I only needed a scorable bass or two to keep my head above the cut line. If I made that jerkbait work, I would have another pattern to work with duirng the Knockout Round.

Unfortunately, all I caught in the drains was non-scorables and I got sent home with a 23rd-place finish.

All in all, Lake Fork was a bitter pill to swallow. Honestly, not being able to make the jerkbait work only piled frustration onto frustration. Not only was I puzzled about what happened to all the fish in the shallow pocket from Day 1, but when I made the play for a bailout with the jerkbait, it let me down too.

I can live with a poor performance if I know where I made a bad decision or when I did the wrong thing. But when I leave a tournament scratching my head as to what went wrong, it just gnaws at my gut!