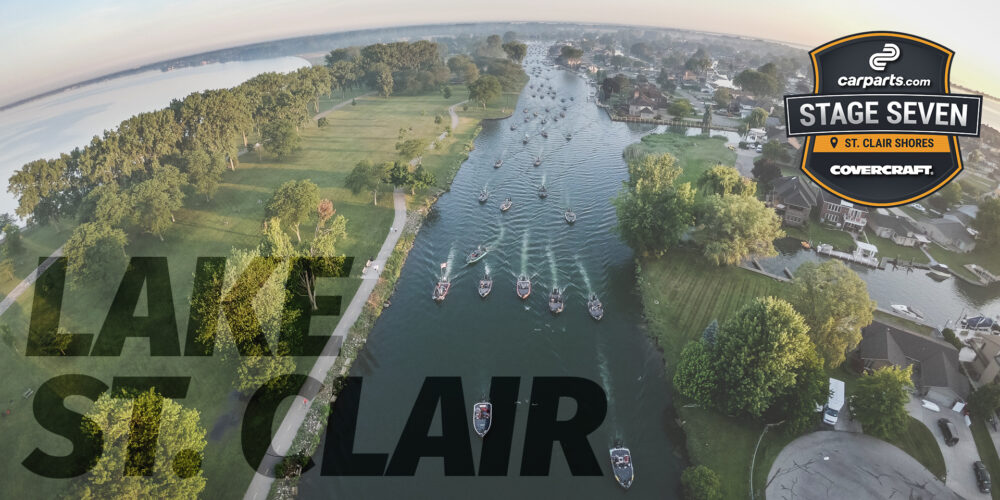 It’s a fitting location to end the season: Lake St. Clair and connected waters offer plenty of options and multiple questions about how a week in early September on the Great Lakes will play out.

The same can be said of the year-end awards and final standings that will be decided this week as the Angler of the Year title, as well as REDCREST and Heavy Hitters qualifications will all come into focus at Stage Seven.

There are many storylines heading into this event, but the three key questions to be answered are: Who’s going to take home the Angler of the Year title? Will largemouth be a factor in smallmouth country? And is Lake St. Clair the place to be this week?

While Lake St. Clair is the event’s official host, there are more bodies of water in play. The field will be allowed fish the American waters of that lake and the Detroit and St. Clair Rivers. Lake Erie is also in play as the 80 anglers fishing this week can fish the lake’s Michigan waters.

Each of the connected waters is slightly different in terms of depth, habitat, and current flow, but all of them are full of bass capable of producing the winning weight. Lake St. Clair has been fishing very well and the bulk of the attention will likely be focused here in the vast grass flats and offshore as bass begin to feed up for the approaching fall and winter.

The Detroit and St. Clair Rivers also have the potential for anglers targeting current-related smallmouth and largemouth in the backwaters and canals of each river system. Lake Erie will also tempt anglers to make the run to avoid the crowds.

Jonathon VanDam has fished Lake St. Clair his entire life and even though he lives on the other side of the state, he counts it as one of his home waters. VanDam thinks the weights will be robust, and there’ll be many ways to target fish, allowing anglers to fish to their strengths.

“The fishing is going to be good, and we’ll have some big weights,” he said. “Maybe not as high as we saw at the St. Lawrence River, but very similar to the totals from Champlain at the last event. St. Clair is full of big fish and it can also be an outstanding numbers lake.”

VanDam is planning to fish Lake St. Clair for the event but feels that water throughout the entire tournament boundary has a chance to contend for the win.

“I’d say 90% of the guys are going to fish St. Clair, but the potential to do well is there in the rivers and at the mouth of the Detroit River in Lake Erie on the rock piles and humps,” he said. “There are always fish that migrate that way following the bait this time of year.”

St. Clair is an outlier for Great Lakes fisheries as it’s shallow and full of grass, making it tough to pinpoint the fish at times.

“It’s not like you can just pull up to a spot and catch them like some lakes,” he said. “I don’t have any secret areas because it’s flat and the fish can go anywhere. That’s going to make the forward-facing sonar so important, and I think it’ll be one of the dominant ways to catch fish in this event.”

VanDam believes plenty of anglers will have luck with crankbaits and just as many using finesse tactics.

“The cranking bite really heats up this time of year,” he said. “You’ll also see the typical smallie stuff like tubes and drop-shots catching plenty of fish.”

Few anglers can match Pro Circuit pro Scott Dobson‘s success on these waters. Seven of his eight Major League Fishing wins have occurred on Lake St. Clair or the Detroit River, including last year’s Toyota Series triumph at roughly the same September timeframe as this event.

After his strong finish at the Pro Circuit finale on the St. Lawrence River, he’s at home and will be one of four anglers from that circuit competing this week.

“It’s my home lake, and I’ll be sleeping in my bed for this one,” he said. “It was a goal of mine to start the season to qualify for this one, and I barely squeaked in (he finished fourth in the event and was the last Pro Circuit in). But, all of my history here is in the five-fish format, so it’s going to take a different strategy.”

While St. Clair is full of fish, Dobson generally seeks out the lone wolf big one and is shifting his thinking for this event.

“All of my success here has been targeting isolated big fish, and I don’t normally catch a lot of fish in a day,” he admitted. “St. Clair can be a great numbers lake, and I’m going to have to start thinking about getting more bites instead of just going for five.

The ongoing pandemic has only recently allowed American anglers to venture into Canadian waters and Dobson thinks that could have affected the fishing quality.

“The U.S. waters have been getting pummeled all season and they just opened Canada about a month ago,” he said. “I’m hoping that has eased some of the pressure for the places we’ll be fishing. The good news, though, is there’s so much water and with at most 40 guys on the water, you may never see another competitor in some places.”

According to Dobson, another factor to consider is the recent shifting temperatures, which should theoretically have the fish on the move and feeding up for fall.

“It’s been blistering hot until recently and now I’m wearing a hoodie in the mornings,” he said. “The fishing is going to get better and better each week and the timing for us might be perfect for great fishing. The whole system is in great shape and Lake St. Clair is full of big fish, so we are going to see a handful of guys club them and then other guys catching 50 pounds a day.”

“Reaction baits like crankbaits fished as fast as you can will be big,” he said. “Then the standard smallmouth stuff like tubes, drop-shot, and Ned rigs. The largemouth guys can flip, frog and throw spinnerbaits and have just as much fun.”

Largemouth Could be a Real Factor

With so much focus on smallmouth in the St. Clair area, largemouth have it easy when it comes to angling pressure, but there are plenty of them and many ways to catch them in the shallow grass and backwaters.

VanDam thinks largemouth will undoubtedly be caught and could be a factor, including possibly a Championship Day appearance for some anglers.

“They could definitely play a role this week and there are a lot more of them now than there used to be,” he said. “They’re predominately in the rivers and their average size may only be around 2 pounds, but there are a bunch of them.”

“I can only think of a small handful of times where largemouth won an event here, but those were on days with epic winds and you couldn’t fish the main lake,” Dobson said. “There are plenty of largemouths and it really could be an event where someone finds the motherlode and racks up the weight with them.”