Lambert Leaving 2019 Struggles Behind Thanks to New Variable Minimum Weight 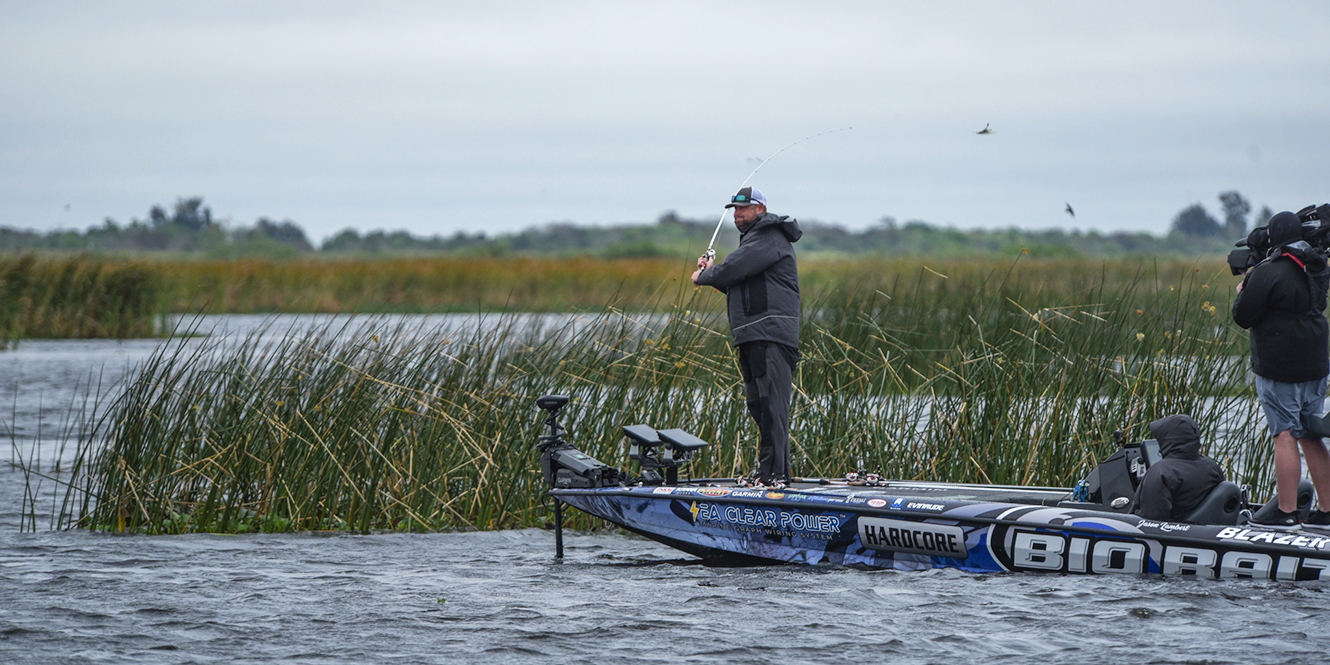 OKEECHOBEE, Fla. — “Everybody has a bad year,” Jason Lambert said as he pulled his wind-battered Blazer out of Lake Okeechobee. “Albert Pujols batted .205 one season and he’s one of the greatest baseball players ever. You just can’t let one bad season dictate your entire career. All 80 anglers on this tour are here because we’re good. We didn’t get here by accident.”

Lambert may have had baseball on the mind, since we’re surrounded by Major League Baseball teams gearing up for spring training here in central Florida. However, his point remains valid: Just like a hitter in baseball, one bad season does not make or break a professional bass fishing career.

2 Pounds a Plus for Lambert

That’s why the Tennessee pro was in high spirits after finishing Qualifying Day 1 of the Bass Pro Tour Favorite Fishing Stage Two Presented by Bass Cat. It’s no secret that Lambert struggled last year in his first season fishing the MLF format. Finishing second-to-last in total points in 2019 was a tough pill to swallow for Lambert, an angler with seven professional wins to his credit. His goal for 2020 was really just to regain confidence and get back to the way he knew he could fish.

“I really struggled the first day on Eufaula and that kind of got in my head a bit,” Lambert recalled of his Stage One on Lake Eufaula. “To be able to come back on my second day, have a good showing and earn so much-needed points was huge for my confidence.”

Although the Evinrude pro was unable to make it to the Knockout Round, he did start to put together a successful strategy thanks to the new variable minimum weight. With a scorable bass needing to weigh 2 pounds or more to count in Stage One and now in Stage Two, Lambert believes he can finally get back to the style he’s always fished.

“The variable minimum weight has really given me new life in this format,” Lambert explained. “I felt like I got behind so fast last season because everyone was just figuring out how to catch scorable bass much quicker than I anticipated. That just isn’t my style of fishing. To be able to pick up a big bait, chunk and wind instead of using a spinning rod is really where I’m comfortable. It definitely puts me in a different mindset.”

Lambert finished his day in fifth place with five bass for 16-9. He’s in a somewhat-comfortable position, 9-6 above the 20th-place angler Shaw Grigsby.

Lambert said he had success working around patches of isolated grass chunking and winding big, moving baits. That’s how he caught his biggest fish of the day, a 5-2.

“The area I stayed in was as protected as an area could be in 30-plus-mph winds,” Lambert expressed while recovering from a breezy beating. “I made up my mind the first morning of practice that I was going to fish in a certain spot and luckily it paid off today.”

Lambert, like many other anglers on the Bass Pro Tour, has valuable Okeechobee experience. A pro-level win with FLW here in 2016 served as a fresher course when game planning for 2020. Still, even with that knowledge, Lambert decided to attack this 2020 version of Okeechobee like a brand-new body of water.

“I’m fishing water where I’ve never caught them in my life,” Lambert said with a chuckle. “When I won here in 2016, I was about 8 miles away from where I fished today. This lake changes every year based on hurricanes, water level and water clarity, so it’s completely different from just four years ago.”

As he prepares for a much-needed recovery day on Saturday, Lambert has an idea of how he’ll fish come Sunday’s Qualifying Day 3. He knows exactly where he needs to improve to be able to make his first Knockout Round of the season.

“I think I’m going to get enough bites, it’s just going to be about landing those bites,” Lambert predicted. “If I can get six to eight fish in the boat, I’ll be feeling pretty good. I have confidence in what I’m doing and how I’m fishing so that’s the most important part.”