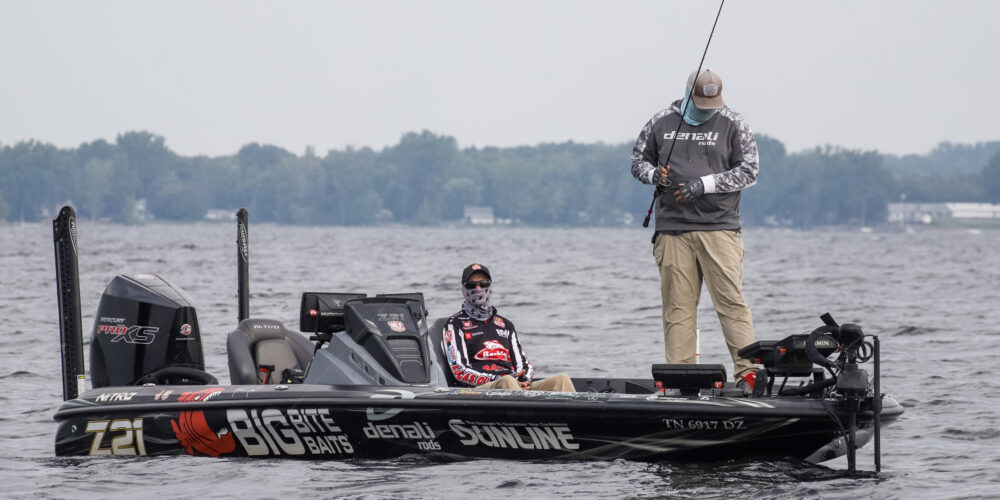 PLATTSBURGH, N.Y. – The runaway leader held serve. The newly crowned Pro Circuit Angler of the Year made the biggest move of the day. Two previous Lake Champlain winners fished their way above the Toro Cut Line and into the Knockout Round.

Oh yes, both smallmouth and largemouth went on the chew after some tumultuous afternoon weather. Just another late-summer day on Lake Champlain.

Alabama pro Matt Lee entered Day 3 of the Toyota Stage Six Presented by Googan Baits with a 55-pound lead in the race for Group A’s automatic berth in the final round. Lee took it easy on his fish on Saturday, adding 27 pounds, 11 ounces on the day to finish the two-day round with 131-0, which catapults him straight to his first-ever Bass Pro Tour Championship Round.

“It feels so good (to make the Championship Round),” Lee said. “I have a 1-in-10 chance now. You don’t beat these guys very often, they’re the best, so to do it by the margin I had after today … that’s incredible.”

The 16 spots below Lee were a lot more chaotic, though. Jacopo Gallelli, Scott Suggs, Takahiro Omori, Shin Fukae, James Elam and Ott DeFoe either held or improved upon their positions in the top 10 to advance to the Knockout Round.

Bryan Thrift – a 2019 Toyota Series winner on Champlain – jumped from 19th to third thanks to a 59-3 surge on Saturday, almost all largemouth (he caught four smallmouth). Thrift hovered around the Toro Cut Line for two periods, and then found the juice an hour into Period 3 – he connected with five largemouth for 15-14 in an hour and put 12 fish on SCORETRACKER® in the weather-interrupted final period to jump 16 spots.

Timmy Horton – who won a 2007 Elite Series event on Champlain – leapfrogged the standings in a similar fashion, climbing from 31st to 12th with 56-5 of largemouth. Horton completely scrapped a Day 1 game plan that resulted in only two smallmouth, instead betting on largemouth and a flippin’ stick around the Ticonderoga area. It paid off almost immediately: Horton added nearly 13 pounds in Period 1, tacking on 18 pounds in Period 2 and adding just over 25 more in the final period.

Just one week removed from claiming the 2021 Pro Circuit Angler of the Year trophy on the St. Lawrence River, Michael Neal landed on a mother lode of smallmouth on the upper end of Champlain. The Tennessee pro put 19 scorable smallmouth on SCORETRACKER® for 60-7, jumping from 26th to ninth and advancing to his seventh Knockout Round in the eight events he’s fished this year in the Bass Pro Tour format.

Numbers and Notes from Day 3

Toyota Stage Six Presented by Googan Baits continues Sunday with Group B’s second qualifying day on Lake Champlain. Justin Lucas will enter the morning with a 5-15 lead over Brandon Coulter and 6-1 over Jeff Sprague for the group’s automatic berth in the Championship Round. The angler with the heaviest two-day total weight will advance straight to the final day.

The anglers who finish second through 20th in combined two-day weight will advance to the Knockout Round to join the 16 anglers who advanced from Group A on Saturday.

After some Saturday-night rains, the weather forecast for Sunday’s competition day calls for calm winds building to 6 mph in the afternoon with a high of 72 and a slight chance of showers in the morning.

You can catch all three periods of competition Sunday on the MLF NOW! live stream, starting at 8:45 a.m. ET. Competition begins with lines in at 9 a.m. ET.