LIVE BLOG: Final Push in Period 3 of Shotgun Round 1 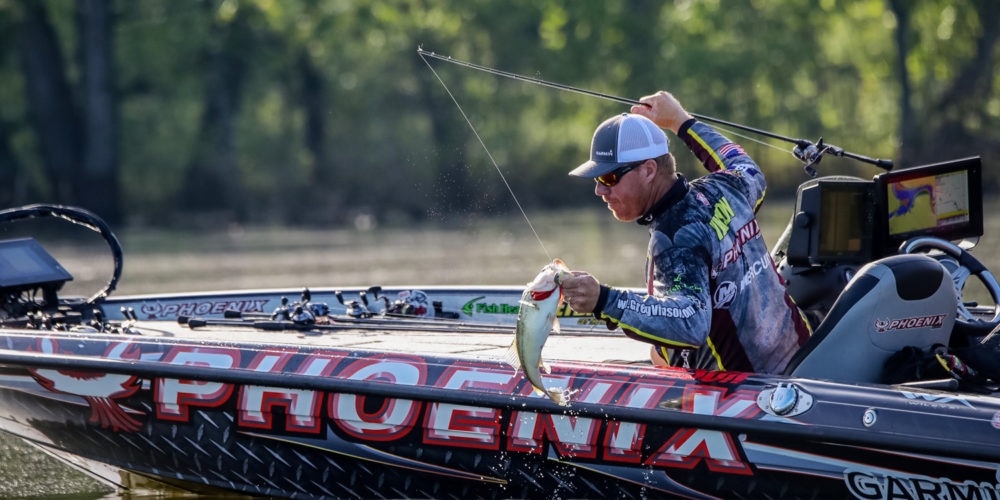 Greg Vinson has been on 'em since the first Period on Table Rock. Photo by Josh Gassmann
May 17, 2019 • Mason Prince • Bass Pro Tour

BRANSON, Mo. — The Bass Pro Tour rolls on today with the beginning of the Berkley Stage Six Presented by TrueTimber from Table Rock Lake. The 40 anglers in Group A hit the water today as they try to position themselves in the Top 20 so they can move on to Tuesday’s Knockout Round.

2:30 p.m. CT – That’s the end of Shotgun Round 1 and Greg Vinson didn’t just have a good day, he had a record-breaking day. Vinson caught 53 bass for 83-6, both of which were Bass Pro Tour single-day records. Vinson is in a very comfortable position heading into Sunday’s Elimination Round 1, but he is well within striking distance of Zack Birge’s two-day record weight total of 105-6.

1:45 p.m. CT – Greg Vinson remains the leader at 75-11 and is getting close to the single-day weight record set by Kelly Jordon. The amount of fish caught continues to grow and gets more impressive as the day moves along. Fourteen of the 40 pros have caught more than 30 scoreable bass during Shotgun Round 1.

11:45 a.m. CT – Period 2 is officially over and there is only one period remaining in Shotgun Round 1. Jesse Wiggins and Greg Vinson continue to flip-flop on top of SCORETRACKER. Down near the would-be Elimination Line, Russ Lane owns the 20th spot as of now and has a total of 31-1. If we do some estimating, it’s looking like 40 pounds or more will put you in the Top 20 after the Shotgun Round. Could that mean that 80 pounds would be the magic weight to make the Knockout Round?

11:05 a.m. CT – Gary Klein has made a push up SCORETRACKER and is now in third place behind Wiggins and Vinson. Klein has 32 bass for 45-12 and has had some early success on Table Rock Lake.

10:45 a.m. CT – Jesse Wiggins is the leader on SCORETRACKER right now with 29 bass for 52 pounds, 5 ounces. He has had success using a variety of baits on the day, but he’s quite fond of his shaky head today.

10:10 a.m. CT – MLF NOW! analyst Marty Stone just said that an angler that will remain nameless told him that you are going to need to catch a scoreable bass every two minutes if you want to keep pace this week. So far, that prediction is looking like it could be true. Greg Vinson is the leader with 28 scoreable bass for 45 pounds, 6 ounces.

9:45 a.m. CT – Another update from Rob Newell on the water and he gave us a detailed explanation of the conditions on Table Rock Lake. The water temperature is sitting around 69-70 degrees with a light stain near the White River which is normal. The big point he brought up is that wind gusts of 30 MPH are expected later on in the day which could really affect the bite.

9:25 a.m. CT – Period 2 is now underway on Table Rock Lake. When the MLF NOW! live stream began, we got a report from Rob Newell on the water. He told us that the anglers that he has spoken to have said that they think there are going to be a lot of fish caught during Stage Six. Newell said that the pros think they might need 40, 50, or even 60 pounds a day to try to keep pace with the rest of the field. As of now, that prediction seems to be correct.

8:45 a.m. CT – Cliff Pace remains your leader at 31 pounds, 1 ounce as Period 1 enters the final 15 minutes. Remember that you can watch Period 2 and 3 on MajorLeagueFishing.com on the MLF NOW! live stream with Chad McKee, Marty Stone, JT Kenney, Natalie Dillon and Rob Newell.

8:15 a.m. CT – Dave Lefebre has made a charge over the last hour to burst himself into second place behind Cliff Pace. Lefebre caught 13 bass in just over an hour for 18-14. There are plenty of fish to be caught in Table Rock, and as you can see from the pictures below, plenty of quality fish as well.

7:41 a.m. CT – Cliff Pace is setting a blistering pace (no pun intended): the Mississippi pro is just shy of 20 pounds, and has weighed the most fish in the first hour (14).

As expected, the field of 40 has spread out from one end of Table Rock to the other. A handful of anglers are on the James River arm and several are on the Long Creek arm, but the bulk of the field is on the White River.

7:05 a.m. CT – Todd Faircloth has the early lead thanks to six bass for 11 pounds, 2 ounces. While there are three different species of bass in Table Rock Lake the the anglers are attempting to catch, Faircloth has had success this morning chasing largemouth. He was able to boat a 4-7 for his first catch of the day, which is the largest of the morning so far. The Texas pro has found some docks that he is working, using a swimbait for a majority of his fish catches.

6:56 a.m. CT – Jeff Sprague summed it up pretty succinctly as he waited to be called (Boat No. 1) for takeoff this morning at Long Creek Marina: “I’m a little scared of this one.” When asked to explain, Sprague was succinct again: “Because, some guys are going to absolutely freakin’ rail on ’em.”

So far, Todd Faircloth and Skeet Reese have proven him right. Faircloth has but five fish on SCORETRACKER for 9-14 to lead, Reese is right behind him with six fish for 8-3

6:33 a.m. CT – It is a beautiful start to tournament week in southwest Missouri. The temperature is expected to creep into the mid-80s today thanks to constant sunshine. Much like in Stage Five, the early-morning shad spawn could be crucial when it comes to getting off to a hot start. We were able to see Jason Christie and others take advantage of that in Cullman, Alabama, so be on the lookout for anglers to put up some impressive numbers early on in the day.