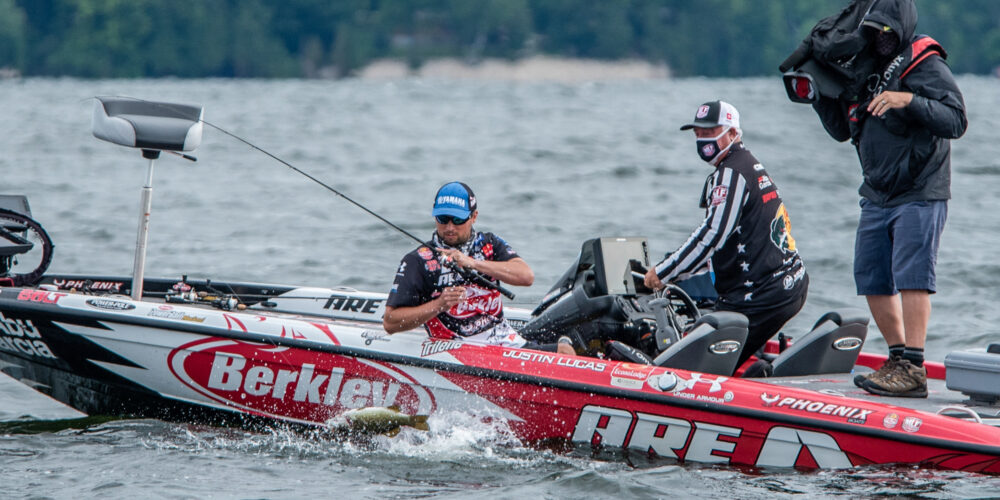 Justin Lucas had another record-breaking day on the bay as he accumulated 205 pounds of bass. Photo by Garrick Dixon
July 12, 2020 • Tyler Brinks • Bass Pro Tour

STURGEON BAY, Wis. – It was another smallmouth smash fest Sunday at the Covercraft Stage Five Presented by Abu Garcia. One angler eclipsed 200 pounds for two days and five anglers made big moves into the Top 20 after beginning the today on the outside looking in.

Some of the top anglers effectively shut it down today, searching for more water when Day 1 leader Justin Lucas appeared to be out of reach. Others made the most of hungry smallmouth bass and made huge moves up the standings.

Of those who made the moves, David Dudley stood out from the crowd with a 101-pound, 3-ounce day that moved him from 37th (with 9-11) all the way to fourth place.

Justin Lucas continued his assault on the MLF record book by breaking yet another of Jacob Wheeler’s records from the 2019 Stage Seven on Table Rock.

After eclipsing the Bass Pro Tour single-period record and single-day total on Day 1, Lucas went added a third record in claiming Group A’s automatic berth in the final round. The previous two-day record was 160-1 by Wheeler at Table Rock, but Lucas added 63-13 on Sunday to finish up with 205-6 for his first two days on Sturgeon Bay.

“It’s been an unreal week,” Lucas said. “The morning was good, but the whole afternoon was great because of what I figured out. I checked out all of my other areas and never saw another fish. The place I’ve been fishing is going to be it. I’ll live here when we come back out (in the Championship Round).”

For much of the day, Lucas hovered just below the 200-pound mark, admitting that beating that weight was on his mind.

“I was thinking about it, and really wanted to hit 200 pounds,” he said.

Lucas will now have two days off for winning his group.

Neither Scott Suggs and Josh Bertrand were never in danger of falling out of the Top 20 after stellar opening days. All they did on Sunday was swap spots, as they both remained in second and third place.

Suggs finished in second after catching 41-3, bringing his total to 160-7. Bertrand ended up with 132-3 after a 9-pound catch to finish third in Group A. Both anglers spent most of their time looking for more areas.

Daniels Holds on to 20th Place

Mark Daniels Jr. started the day in 16th but spent much of the afternoon in an uncomfortable position. He was hovering around 20th for what seemed like an eternity, especially for him.

“Boy, oh, boy, it’s been a grind for me out here,” he admitted on MLF NOW! as time expired. “I thought it would be easier after the practice I had.”

David Dudley found himself near the bottom of the standings, but knew he still had a chance.

“I saw enough big totals, so I knew it was still possible to move into the Top 20,” Dudley said. “These are smallmouth and very aggressive. If you get on the right big school, they’re going to bite.”

Group B will return to the water tomorrow. This group had much tighter weights down the standings and nobody can be counted out at this point as they try to finish in the Top 20. The weather forecast calls for a high of 78 degrees under sunny skies with light winds.

Watch all three periods of competition during MLF NOW! live stream July 10-15, beginning at 7:45 a.m CST. Watch for FREE on MajorLeagueFishing.com, the MLF app or MyOutdoorTV. The General Tire Takeout show starts at approximately 4:05 p.m. CST after each day of competition.