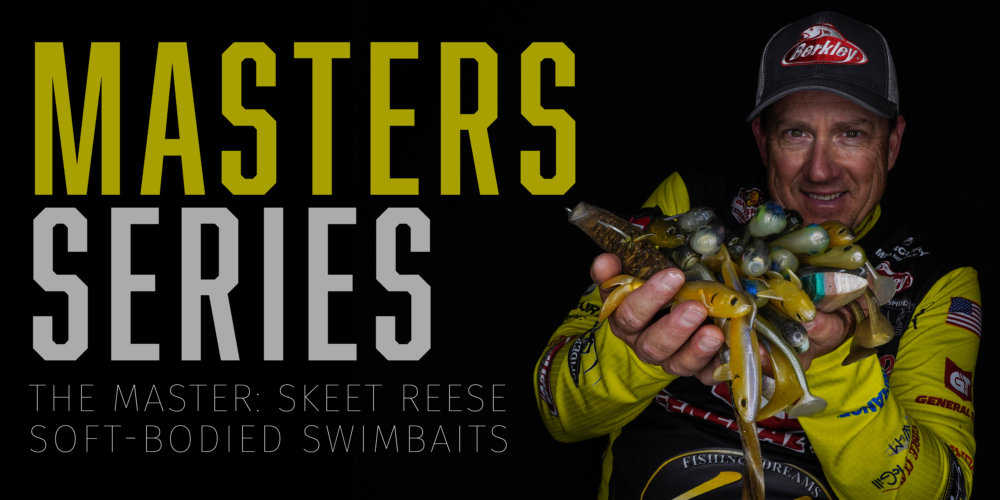 I started using big, soft-bodied swimbaits in the late 1980s, when they were just starting to catch on in California. Guys were using them to agitate big female bass during the spawn.

It was amazing how the bass reacted to 12- and 15-inch lures that were invading their beds. Sometimes they’d attack the bait, and you’d catch them on it, but more often they’d just reveal themselves, so you could go back and catch them with something else later.

That particular technique was a closely guarded secret for a long time. Guys kept it hidden in their rod lockers, but it eventually got out when the spotlight of national tournaments was put on it.

In the early 2000s, I realized that smaller swimbaits could be just as effective on waters with smaller bass or in places where bass were targeting smaller baitfish. That realization opened up a lot of possibilities for me as an angler, and it eventually led to the explosion of swimbaits in the tackle industry.

Today, I regularly use swimbaits ranging from just 2 or 3 inches to over 12 inches in length, but I especially love the larger swimbaits — 5 inches and up. For me, there’s just nothing like a big swimbait bite. You just know it’s going to be a good fish.

One of the first big wins I ever had was on Clear Lake in California, and my catch was anchored by a 9-pound bass that hit a 12-inch swimbait. Later, I won tour-level tournaments using big — though not as big — soft-bodied swimbaits on Smith Mountain Lake in Virginia in 2010 and on Lake Guntersville in Alabama in 2015. They’ve been an important part of my arsenal for a long time now, all across the country.

THERE’S JUST NOTHING LIKE A BIG SWIMBAIT BITE. YOU JUST KNOW IT’S GOING TO BE A BIG FISH.

Prespawn to postspawn, I’m generally targeting water less than 10 feet deep near spawning areas. Three or more feet of visibility is ideal, but it’s not critical. You’ll get (and be able to notice) a lot more followers when the water’s clear, but I’ll throw a swimbait even when visibility is as little as 6 to 12 inches.

Choosing the right gear for soft-bodied swimbait fishing has everything to do with the hook (or hooks) on your swimbait. If your bait has a single jig-style hook coming out of the top of the bait, like the Huddleston Deluxe, you need a heavier-action rod to drive the hook into the mouth of a big bass. For that, I like a 7-foot, 6-inch heavy-action rod and 20- or 25-pound-test Berkley Trilene 100% Fluorocarbon line.

If I’m using a swimbait with one or more treble hooks, like the Osprey Talon Inline, I want a softer rod with a more parabolic action that’s more forgiving and that stays loaded up to keep pressure on the trebles. I use a 7-foot, 6-inch medium-heavy-action rod and 20-pound-test Trilene 100% Fluorocarbon.

I want something with a large line capacity in a 150 or 200 size for my reel. I use the Abu Garcia REVO Toro Beast in the 6.2:1 gear ratio. It’s an intermediate speed, so I can easily speed up or slow down and still maintain a comfortable retrieve cadence.

You can classify most soft-bodied swimbaits by their tail style. I mostly use boot-tails and paddle-tails. A boot-tail (like the Huddleston Deluxe) has a lot of thump, works well at slow speeds and is my choice in cold water. A paddle-tail (like the Basstrix or Osprey) is good at faster speeds.

Generally, a slow, steady retrieve is best for these big swimbaits, but conditions vary, and you’ll want to experiment until you start getting bites. Quite often, I’ll “pop” or snap my rod tip to make the lure move quickly and erratically. That sometimes triggers a strike.

If your boat’s moving or drifting while you’re fishing a swimbait, there’s a tendency for a bow to form between your rod tip and the lure. That bow or sag in your line can cause your bait to swim in an unnatural way rather than in a straight line, plus it cuts down on your sensitivity and ability to get a good hookset. You want to eliminate that bow as much as possible and to keep a tight line between your rod tip and the bait.

One way to do that is to watch out for unnecessary boat movement or to change the angle of your casts to allow for that movement. It also helps to point your rod directly at the lure as you retrieve it. You’ll get a lot more strikes if your swimbait moves naturally.

Ultimately, a big swimbait is just a tool, like any other lure in your tackle box. They may be more expensive than some of your other lures, but you can’t let that stop you from putting them where fish live.

I regularly fish an 8-inch swimbait in places where most anglers would only cast a hollow-bodied frog, and I’ll skip that same swimbait 40 feet up under a boat dock where bass have never seen a lure like it.

If you fish a swimbait like you’re afraid to lose it, you’re not going to have the kind of success you’re looking for – and you just might lose it anyway. These lures are tools designed to get a bite or to reveal the presence of a big fish. If you’re not using them like tools, you’re missing a great opportunity and a lot of big fish.

As a general rule, you don’t want to fish the big soft-bodied swimbaits by positioning your boat in deep water and casting to shallow water. Too much of your retrieve is out of the strike zone when you do that. You generally want to keep the bait near the bottom, and that’s harder when you retrieve from shallow water to deep water. You have to slow your retrieve way down or even stop it to regain contact with the bottom.

That’s why I prefer to position my boat in shallower water and cast to deep water or to fish parallel to the shoreline across water that’s likely to be about the same depth. When you fish uphill (deep to shallow), it’s much easier to control your depth and to keep your bait near the bottom.

There’s a lot more to fishing big soft-bodied swimbaits than most anglers realize, but, as with most other bass fishing techniques, it all starts with proper boat positioning. Put yourself in the right position to make a good presentation before you make that first cast.