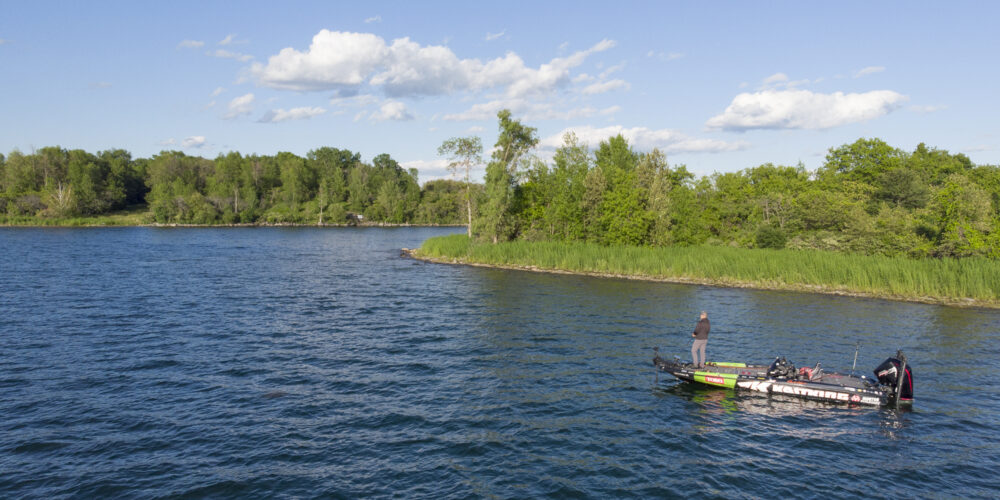 Doesn’t sound like much of a problem, does it? However, when you’re fishing against the likes of Edwin Evers, Kevin VanDam and Josh Bertrand – all previous winners on the St. Lawrence – and competing in a format where every 2-plus-pound fish counts, the sheer numbers are staggering (and as Cox admits, just a little intimidating).

“I don’t know if I can keep up with these guys, honestly,” Cox says. “But I can tell you this: this river is just loaded with smallmouth over 3 pounds. What’s the record for weight caught in a day (on the Bass Pro Tour)? Well, whatever that number is, it’s probably going to be broken a few times this week.”

That record – 141 pounds, 9 ounces – currently belongs to Justin Lucas, who put on a smallmouth-catching extravaganza on Sturgeon Bay in 2020. But as good as the Sturgeon Bay fishery is, practice reports from several Mercury pros indicate that the St. Lawrence in late June (with fish in all stages of the spawn) could prove to be even better.

“They’re all about that long,” Mark Davis said, holding his hands wide to demonstrate the size of the smallmouth he caught in practice. “The problem isn’t going to be in finding and catching fish, it’s going to be how long it takes you to get a 4-pound smallmouth in the boat on light line.”

The Challenge: Which Water is Best?

With a 95-plus-mile playing field and a nearly uncountable number of fishy shoals, bays and shelves between the takeoff point in Massena and the boundary near the town of Cape Vincent, the two competition groups have plenty of water to choose from.

And therein lies the first question: How far to run their Mercury outboards before lines in, and how long to stay in one spot?

“You can run a long, long ways on this river, but the question you always have to ask yourself in this format is ‘Do I run, or do I fish?’,” said Mercury pro Brent Chapman. “It’s hard to keep running when you know that fish are being caught – it’s even harder to put the trolling motor down on your first spot and already be 20 pounds behind.”

Cox admits that he’s probably going to play it safe his first qualifying day with a shorter run and longer fishing time, but the challenge then turns into a game of finding slightly higher quality fish than the rest of the field.

“I caught maybe 30 or 40 fish my first day of practice and maybe a couple of them were less than 2 pounds,” Cox says. “I like that they’re shallow right now, but I think that’s going to be a little bit of an adjustment for guys – finding groups of fish over 4 isn’t automatic, but if you can find some places with numbers like that, you’re in good shape.”

And if the bite flags on a given spot, none of the pros plan to stay long.

“You can’t afford to not be catching fish here,” Chapman says. “That’s why I ran as far as I could go my first day of practice: to figure out as many productive spots as possible. Once lines go in and guys start catching fish, you can’t spend time looking.”