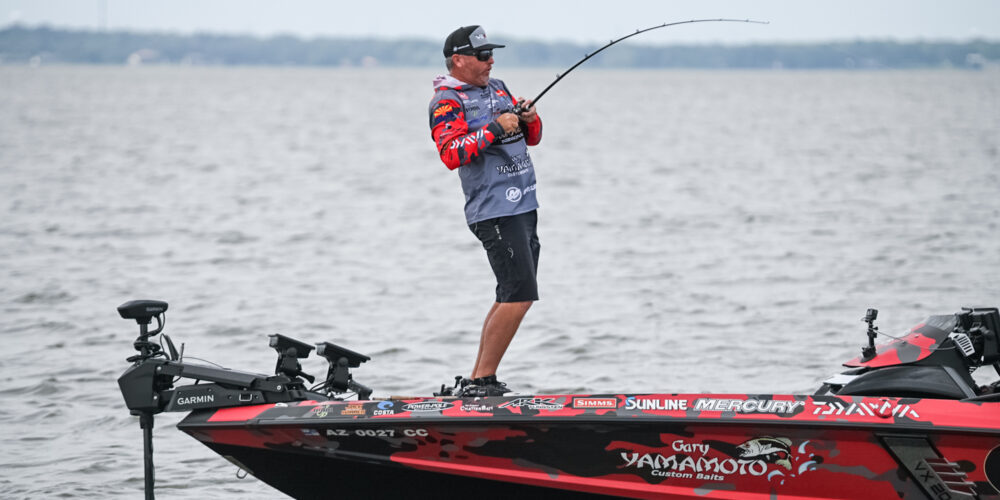 Arizona pro Brett Hite’s name is synonymous with the vibrating jig, specifically the Z-Man Evergreen ChatterBait JackHammer. Hite helped make the bait one of the hottest selling lures over the past few years, and is the face of the bait in America.

As a result, there have been countless quality articles – including on this website – tapping into his expertise on fishing vibrating jigs. But, even for a guru like Hite, there’s a time when the standard JackHammer isn’t the best option.

Times where the sun comes out and the wind dies down, for example, or when every boat around him is throwing the same lure. These situations both occurred at Stage Three on the Harris Chain of Lakes in Florida.

When this happens, Hite switches to the subtler StealthBlade version of the bait (which features a clear polycarbonate blade) or opts for a swim jig.

The ChatterBait has become so successful because the bait works everywhere and because it catches big fish.

Like most reaction baits, the JackHammer excels under windy or lowlight conditions. If Hite doesn’t have those conditions to work with, he switches up to the StealthBlade.

“If you have bluebird skies and no wind, the fish often want something more subtle,” Hite says. “Another situation is on extremely clear reservoirs when you want the vibration, but it needs to be toned down a little.”

He’ll also decide when to fish the more subtle lure over a standard JackHammer based on the fishing pressure in an area.

“There are places like Guntersville or anywhere in Florida, that everyone is throwing a ChatterBait around grass, every single day,” he said. “They still work, but sometimes being a little more subtle is better. I’ll also go back through areas with the StealthBlade if I think I can catch a few more fish.”

Hite fishes the StealthBlade on the same 7-foot-3 heavy glass Evergreen Combat Stick with a 6.3:1 Daiwa Tatula Elite reel that he uses for the standard JackHammer, but drops down a few line sizes. Instead of 20-pound Sunline FC Sniper fluorocarbon, he spools up with 14- or 16-pound test.

“The lighter line helps to get bait down a little,” he said. “I also think you will get more bites with a lighter line in calm conditions and on pressured fisheries.”

One of the generic names for a ChatterBait is “bladed swim jig” – it shares many similarities to a standard swim jig. Hite will fish both the ChatterBait and a regular swim jig in the same areas but says the swim jig works wonders when conditions are truly tough.

“I’ll fish the swim jig in the same places as the JackHammers, but it’s better at times because it’s a lot more subtle,” Hite said. “It works when it’s dead, slick calm or in areas with a lot of fishing pressure when they just stop biting other baits.”

While vegetation is the main target, he doesn’t shy away from fishing a swim jig around brush, trees or rocks. But, when fishing grass, contact with the vegetation is critical.

“The key, a lot of times, is to fish it where it’s just hitting the top of the grass,” Hite conforms. “I’ll go with a lighter or heavier bait and also adjust how fast I’m winding it, depending on the height of the grass.”

His swim jig of choice is the Evergreen Grass Ripper, a new bait that accounted for some key fish in his Top-10 finish at the Harris Chain. The Grass Ripper will be available with the same colors as the JackHammer lineup to make an easy transition to the right color when the bite shifts from vibrating jig to swim jig.

The Yamamoto Zako is Hite’s go-to for the JackHammer, but he goes with the paddle tail version for his swim jig. He fishes his swim jigs on a 7-foot, medium-heavy Evergreen Combat Series stick with a 7.1:1 Daiwa Tatula Elite reel spooled with 20-pound Sunline Shooter.