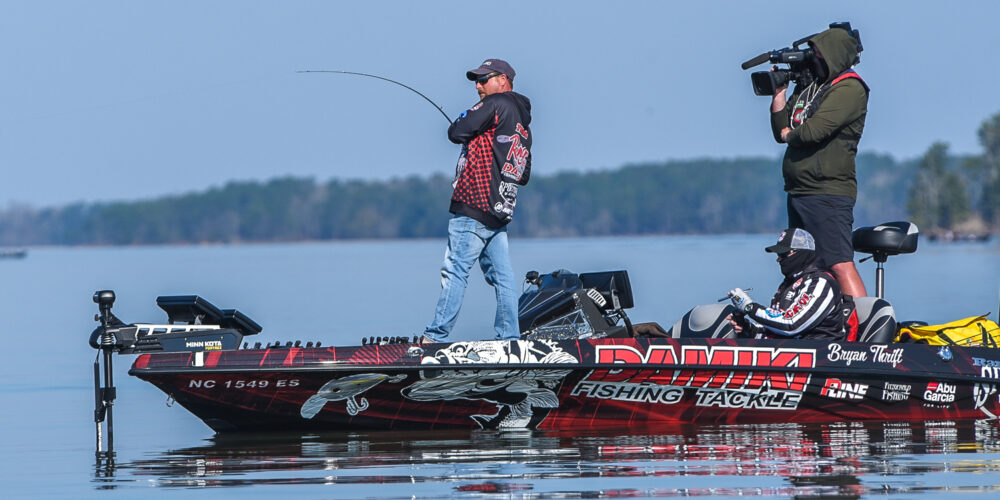 EUFAULA, Ala. –  It was a tough morning of fishing for everyone in the Knockout Round…everyone not named Bryan Thrift, that is.

The 10 anglers competing today on Lake Eufaula put 23 bass on SCORETRACKER® in the first period –Thrift had nearly half of those with 11 bass for 29 pounds, 4 ounces.

Once time expired in the period, the North Carolina pro explained that he was done fishing his primary area for the day and going into search mode.

“I’m going to go looking shallow and maybe go back out deeper later,” Thrift said. “I’m hoping to find something else for tomorrow unless I start getting passed in the standings.”

His fast start was fishing offshore brushpiles on the southern end of the lake and he milked his spot the entire time he was there, never cranking up his Mercury.

Thrift has remained in one large circle around his target and thoroughly covered the area, all while making long and precise casts to the same location.

He remained methodical and would alternate between different baits (both with spinning and casting rods) and make multiple casts. After a handful of casts, he would adjust his boat position and repeat the process.

The angle at which he retrieved his baits through cover each time was slightly different, and he kept close attention to his electronics. He would glance down at his electronics every few seconds during each retrieve to make sure he was lined up just perfectly.

While Thrift looks to be in control of the day and tournament, he’s still looking for more areas and paying attention to the spring-like conditions around him.

“I’ve got pollen all over on my boat and it’s getting hot,” Thrift said. “I’m starting to sweat out here and that means there’s a chance that the fish will move up shallow and start biting like crazy. If that happens, I’m definitely not safe. This is Lake Eufaula.”

The water temperature in Lake Eufaula continues to creep toward that “head-to-the-bank” temperature for these Alabama bass.

MLF NOW! reporter Rob Newell mentioned this morning that the water temperature in Cowikee Creek has crept up to 58 degrees, and with more sunshine and warmer air temperatures expected all day today, it’s going to keep climbing.

Ott DeFoe and Bryan Thrift found success early in the morning away from the bank, and Edwin Evers mentioned to the camera, “I guess their fish haven’t decided to head to the bank yet.” Evers was focusing on flipping through brushpiles along the bank, in hopes that the warming temperatures would lead to his bass rolling up shallow.

Randall Tharp is continuing his strategy of staying close to the bank as well.

“I love the way I’m fishing right now and I’m not going to change,” Tharp said this morning while sitting without a scorable bass on SCORETRACKER®. “I know these fish are coming up shallow, it’s just a matter of time. One bite can change anything here.”

Anglers witnessed water temperatures in the low- to mid-50s. Favorable weather conditions have helped raise that temperature closer to the 60-degree range as we close out the week. If the anglers who plan on working the bank can continue to hold out hope for a few more degrees of warmth, we might start to see the amount of big bites skyrocket.