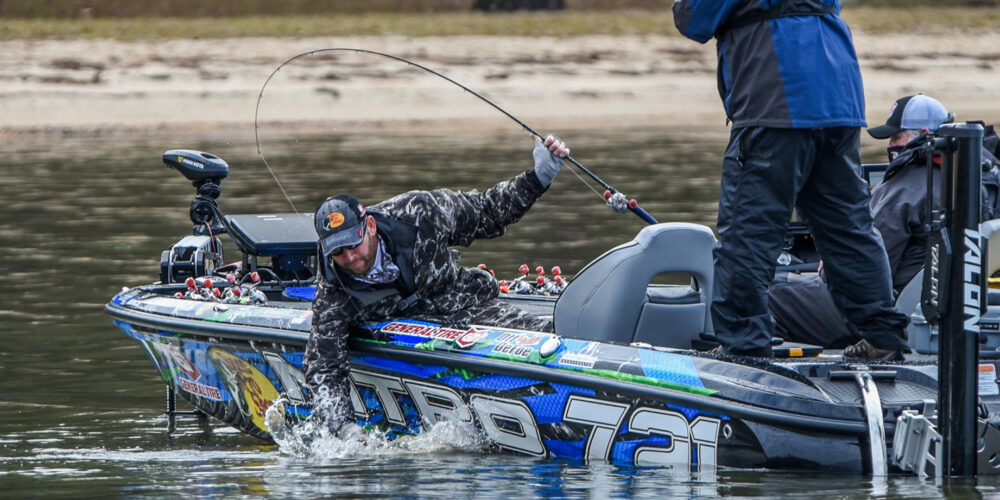 EUFAULA, Ala. – Listening to pre-tournament chatter before the start of REDCREST presented by Old Wisconsin Sausage, several anglers nodded their heads toward Ott DeFoe and Bryan Thrift: “It’s going to be hard to beat Ott,” and “We’re all going to be chasing Thrift,” some of them said.

So far, both Thrift and DeFoe are proving them right.

DeFoe went to work early with a jerkbait, racking up 14 pounds, 7 ounces in the first 30 minutes of competition (including a 5-14) to jump to a quick lead. Thrift overtook DeFoe shortly after the start of Period 2 fishing the bottom end of the lake, and doesn’t appear to be slowing down.

As of this writing, the North Carolina pro has racked up 42-13 on 12 fish – fishing primarily a small swimbait and swim jig – after landing his biggest fish of the day (a 7-1). Thrift’s old tournament partner Andy Montgomery jokingly said that Thrift had “never finished below second” on Lake Eufaula – not totally accurate, Thrift has a few Eufaula Top 30s on his resume – but it’s hard to deny that Thrift is going to be a handful this week.

The 11-time BIG5 winner has added 23-1 to SCORETRACKER® to this point near the end of the second period, including the biggest bass of the event so far. DeFoe, meanwhile, hasn’t landed a scorable bass since just before the first-period break.

The fact that DeFoe got on ‘em quickly was no surprise – he finished third on Lake Eufaula at last year’s Bass Pro Tour season opener – but the bait he caught them on was an unexpected detour.

DeFoe caught his first fish of the day on a Rapala OG Slim 06 flat-sided crankbait – he fished a prototype of the Slim last year at Eufaula – but swapped to a jerkbait after he missed a fish and had two more fish bump the Slim but not bite it: “I didn’t feel like the Slim was the right thing,” DeFoe observed.

“We had one day of practice here, so I decided I was going to ride or die with history,” DeFoe admitted. “Sometimes history can kill you, but I didn’t fish much at all in practice. I was out for 11 hours, but I didn’t fish much. I idled, marked a bunch of waypoints – I couldn’t think of where else to start but where I did good last year.”

“Transition” is a bit of an overused (frequently MIS-used) word in bass-fishing parlance, but that’s exactly what you’re likely to see this week as Lake Eufaula. Water is in the high 40s/low 50s today, but as daytime temperatures climb into the low 70s over the course of the event and as the moon phases toward a 99 percent full moon by the end of the week, Eufaula’s bass will likely go through a fast, dramatic transition.

“Even though the water is cold, these fish still know that it’s February – they’re coming to spawn,” MLF NOW! analyst JT Kenney observed.

Zack Birge, Kevin VanDam and Andy Morgan haven’t quite matched Thrift and DeFoe for quantity, but the bites they’ve had have been the right kind. Birge is on a 4-pound average with five fish for 20-9 (all on a spinnerbait). Morgan landed the first scorable fish of the season with a 4-15 just 11 minutes into the morning and is currently on a 3-10 average. Ditto VanDam, whose five fish also have him at a 3-10 average.