MORNING TRENDS: Davis, Morgan Will Stick with What Got Them Here 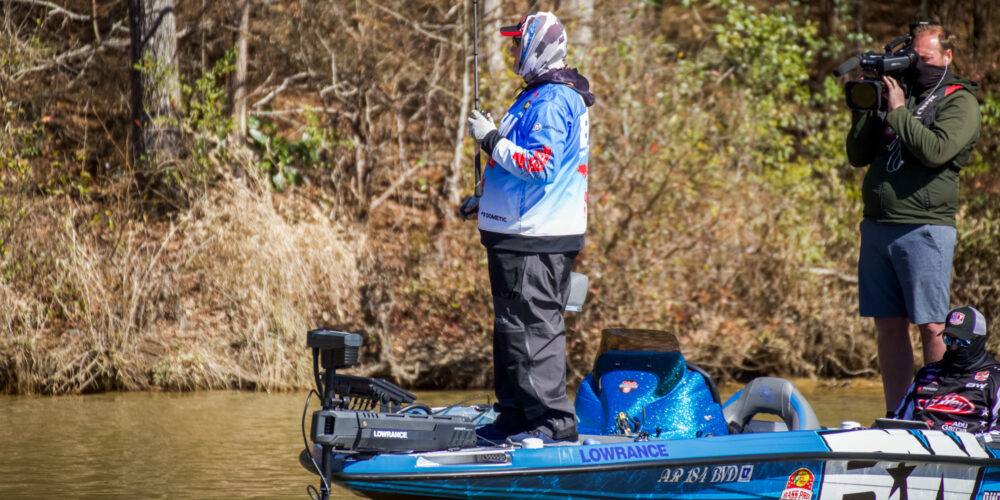 EUFAULA, Ala. – Mark Davis liked where he was sitting (on top of SCORETRACKER®) after Period 1 of today’s Elimination Round with two bass for 6 pounds, 11 ounces.

And even though the Arkansas pro has since surrendered the lead to Zack Birge, he’s planning on staying the course with his pattern.

“I’ve gotten two bites this morning and I made them count,” Davis said during the first period break. “It’s slow going, but I really think this is what I need to be doing right now.”

Only four anglers had managed to put scorable bass in the boat after 2 ½ hours of fishing, leading Davis to believe that it’s only going to take five or six scorable bass to advance to the REDCREST Championship Round. Because of this, he doesn’t see a reason to change what he’s doing.

“I figured out that this Strike King Rage Bug can get me some bites, it’s just going to take a little bit,” Davis said. “The good thing is, I have the luxury of being patient and slow with it right now because everyone else is struggling. I don’t think I’m going to focus on anything else other than this Rage Bug for the rest of the day.”

Davis also mentioned how he thinks Lake Eufaula is just days – maybe even hours – away from seeing waves of largemouth head to the bank.

“You can tell they want to come up,” Davis said. “It won’t be long now, I just hope we’re here for it when it happens. A few degrees (of water temperature) could make all the difference.”

Eufaula IS showing signs of life: just 15 minutes into Period 2, eight more scorable fish had shown up on SCORETRACKER®.

Morgan Back to Basics

Andy Morgan spent the majority of his day practicing during Qualifying Round 2 since he was safely above the Toro CutLine. He said at the time that he was going to search for an additional pattern that would work for him besides his white/chartreuse vibrating jig and brown punching rig. This morning, he started off right next to the Lake Point marina where he launched, focusing on rip-rap and never taking a red crankbait out of his hand.

Unfortunately, that change in strategy wasn’t as fruitful as Morgan had hoped. He gave up on his crankbait and burning down the riprap shoreline after 30 minutes and returned to the same spot he fished yesterday with his vibrating jig/punching combo.

The water temperature in that area surrounded by tall reeds and matted vegetation was up a couple of degrees from yesterday—from 55 to 57 degrees—so perhaps the Tennessee pro thought that he might have some luck going back to his original game plan.

He spent around 30 more minutes in search of a bite but couldn’t find one. He told his official and cameraman, “If I’m going to lose I’m not going to lose like this. If these were Tennessee bass they’d be biting these baits in this water temperature. It’s time to change something up.”

Morgan strapped his rods down and prepared to make a run up north even further up the Chattahoochee River. The move apparently paid off as Morgan connected with a 3-7 to get on the board.