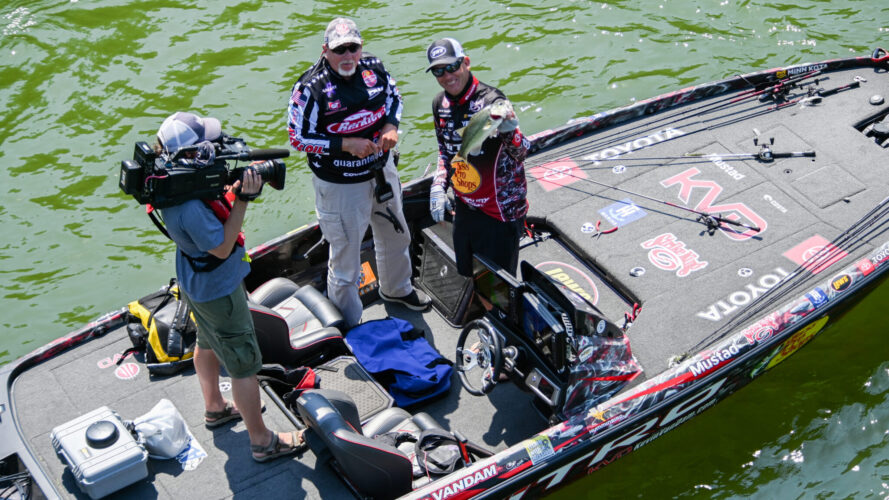 SPRING CITY, Tenn. – There are certain initials in the bass fishing world that just seem to fit together: KVD and TVA, for example. At the end of the third day of General Tire Stage Five Presented by Covercraft on Watts Bar Lake, it’s probably a surprise to nobody that one initial (KVD/Kevin VanDam) is leading on the other (TVA/Tennessee Valley Authority).

VanDam – who has racked up multiple wins on the Tennessee River in his illustrious career – entered the day in sixth place in his 40-man group. That didn’t last long. VanDam closed the 9-pound, 3-ounce gap between him and Day 1 leader Brandon Coulter in the first period and eventually ended the day with 12 bass for 30-0, both day bests.

VanDam Cruises to Championship Round

A 25-plus-year run of success shows that VanDam has the Tennessee River lakes dialed. VanDam owns several big wins on Lake Guntersville and Kentucky Lake, and claimed a win on Lake Chickamauga during last season’s Bass Pro Tour. That’s not taking into account his 20-plus Top 10 finishes on the fisheries. It’s no secret that he has the TVA figured out.

Now that he’s claimed an automatic berth in the Championship Round, VanDam has a 1-in-10 shot at adding Watts Bar to his list of TVA successes. What’s unique about his dominance so far this week is how he’s fishing – there are no offshore ledges and big Strike King crankbaits in his game plan. Instead, he’s sticking shallow and making it work.

“This week was exceptionally different than I would ever plan on fishing a summer tournament on the Tennessee River, but it’s worked out,” VanDam said. “I started in a creek away from the main lake to get a feel for how things were going. I was able to catch some fish and make a run at the lead. Normally things don’t go as scripted, but today was perfect.”

VanDam was thrilled to get a spot in the Championship Round because of the difficulty of advancing through the Knockout Round. It’s his first-ever automatic qualification for winning a group on the Bass Pro Tour.

“Those are the hardest rounds to get through because all of the guys who make it there have been catching them for two days in a row,” VanDam said. “Anything can happen once you get to the Championship Round. You can’t win it if you are not there on the last day.”

Takahiro Omori began the day in second place behind Coulter and a late push kept him in the same position. Behind him are Jordan Lee and Andy Morgan, who came into Watts Bar ranked second and third, and did what they needed to do to stay in the race. Among the three, Lee had the best day with nine bass for 20-11, while Morgan took home the Berkley Big Bass of the day with his 5-14.

Dakota Ebare and Paul Elias have vastly different careers, with Ebare fishing his first season on the Bass Pro Tour and Elias having earned his induction to the Bass Fishing Hall of Fame a decade ago. Elias won the 1982 Bassmaster Classic several years before Ebare was born. But the two fished similarly Monday as both made late rallies to advance to the Knockout Round.

Both were equally thrilled to advance.

“That took a toll on me, but I lucked up and made it in the last spot,” Elias admitted.

The Mississippi pro started the day in 29th and rallied to 20th place late in the day with three bass in the final period.

Ebare had a rollercoaster day and turned it around late in the day with a 3-10, 3-15, and two more scoreable bass in Period 3.

“I’m thankful to be on the right side of that line,” Ebare said. “I couldn’t get things going early in the day, but kept hustling all day.”

A Look at the Bally Bet AOY Race

Most of the anglers who sat near the top of the Bally Bet Angler of the Year standings coming into this event have done their part to maintain their positions.

In addition to VanDam, Morgan, and Lee, Randall Tharp also advanced. VanDam and Tharp came into the event sixth and seventh in the standings. In Group B, current AOY leader Jacob Wheeler is in a good position to advance to the Knockout Round after finishing eighth after one day. Jesse Wiggins (fourth) and Alton Jones, Jr. (fifth) completed their first day of fishing in 18th and 24th, respectively, with each needing good days to move on.

Group B returns for their second day of fishing Tuesday on Watts Bar. Twenty anglers will advance and the rest will hit the road. Fishing kicks off at 8 a.m. EST on Tuesday. Live coverage starts at 7:45 a.m. EST on the MLF NOW! live stream. Watch for free on MajorLeagueFishing.com, the MLF app, or the MyOutdoorTV app.

The 2022 Bally Bet Angler of the Year will take home a $100,000 prize at the end of the 2022 Bass Pro Tour season. Jacob Wheeler leads the race entering this event with 300 points, followed by Jordan Lee with 283 points and Andy Morgan with 255 points.