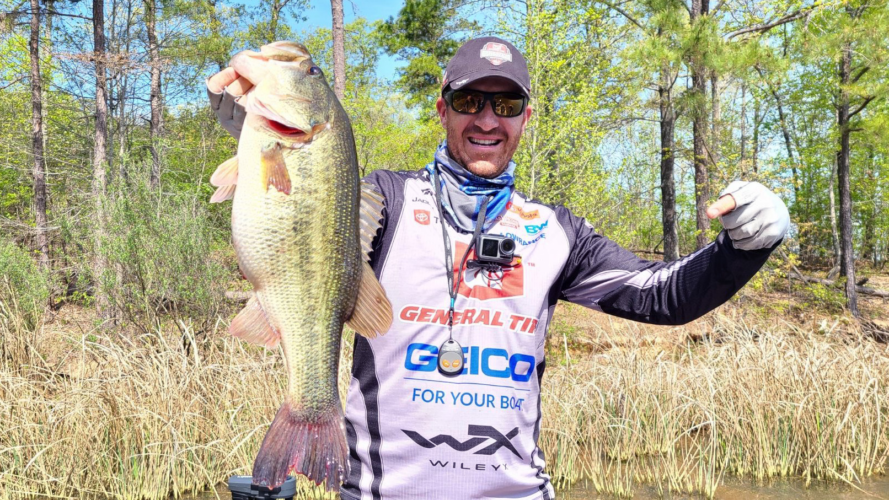 TYLER, Texas – Major League Fishing, the world’s largest tournament fishing organization, is set to return to Texas next week, April 9-14, for the third-annual General Tire Heavy Hitters at Lake Palestine. The all-star event will showcase the 32 pros that qualified from the 2021 Bass Pro Tour season competing in a no-entry-fee tournament for a purse of more than $500,000, with a top prize of $100,000 to the winner along with Big Bass Bonuses during the competition that pay out $25,000, $50,000, and $100,000 to the single biggest fish in the Qualifying, Knockout and Championship rounds.

To qualify for the General Tire Heavy Hitters 2022 event, the weight of an angler’s single-largest bass from each event of the seven 2021 Bass Pro Tour events was recorded. The 32 anglers with the heaviest five big-fish totals from those seven events qualified to compete in this event.

This event will mark the first time that MLF has ever visited Lake Palestine for an event featuring the catch-weigh-immediate release-format.

“This lake has been on the ‘quiet’ upswing for probably the last 5 to 7 years,” said MLF Director of Event Research and Program Analyst Marty Stone. “This is a ‘kiss and don’t tell anyone’ lake in Texas. The local anglers know how good it is, it just hasn’t had big enough boat ramps and hotel infrastructure to support a national trail. But it will be perfect for this General Tire Heavy Hitters event and I know we’re getting ready to see some tanks.

“I know of at least one 13-pounder that has come out of there this year,” Stone said. “I think it will take a 9-plus-pounder every day to win the big fish awards, and I think we will see several in the 10-plus range. If we were here a month earlier, I would predict Randy Howell’s record for the largest fish ever caught in Bass Pro Tour competition would likely be broken.”

One Bass Pro Tour angler who will not be competing in this event is local pro Jeff Sprague of Wills Point, Texas. Sprague was the big winner of last year’s General Tire Heavy Hitters 2021 event as he caught the Championship Round Big Bass and earned the $100,000 top prize. The local pro is extremely disappointed that he was unable to qualify for this year’s event but knows that the anglers on the water are in for a special treat.

“Lake Palestine is a hidden jewel in East Texas,” Sprague said. “I’ve been very fortunate to grow up fishing it and it kills me that I’m not going to be a part of this event. This one is going to really impress anyone who watches. We’re going to see a lot of scorable bass caught weighing 5 pounds plus, and quite a few 8- and 9-pounders.

“The only downside that we might see is that the lake is facing a tremendous amount of pressure over these next few weeks – it is absolutely the prime time to be fishing Lake Palestine,” Sprague said. “It’s known for kicking out mega-bags this time of year, and I know that the guys fishing in Heavy Hitters are going to have an amazing event. “

When asked about the excitement surrounding the Big Bass Awards, Sprague said the opportunity to earn $100,000 from one fish doesn’t come around often.

“It’s not very often that anyone, anywhere gets to fish for that kind of money for just one bite,” Sprague said. “To pull it out last year, was so incredible. A single fish worth $100,000 is a once in a lifetime catch.”

Anglers will launch each day at 7:30 a.m. from the Villages Marina, located at Big Eddy Road in Flint, Texas. Each day’s General Tire Takeout will be held at the Marina, beginning at 4:30 p.m. Fans are welcome to attend all launch and takeout events and also encouraged to follow the event online throughout the day on the MLF NOW! live stream and SCORETRACKER® coverage at MajorLeagueFishing.com.

The General Tire Heavy Hitters 2022 will feature anglers competing with a 2-pound minimum weight requirement for a bass to be deemed scorable in the Qualifying and Knockout Rounds, but for the final day Championship Round a bass must weigh at least 3 pounds to be deemed scorable. Minimum weights are determined individually for each competition waters that the Bass Pro Tour visits, based on the productivity, bass population and anticipated average size of fish in each fishery.

The 16 Anglers in Group A compete in their two-day qualifying round on Saturday and Monday – the 16 anglers in Group B on Sunday and Tuesday. After each two-day qualifying round is complete, the anglers that finish in second through eighth place from both groups advance to Wednesday’s Knockout Round, while the winner of each group advances directly to Thursday’s Championship Round.

The 32 anglers that will be competing in the General Tire Heavy Hitters 2022 All-Star Event on Lake Palestine are:

The MLF NOW! broadcast team of Chad McKee, Marty Stone and J.T. Kenney will break down the extended action on all six days of competition from 7:45 a.m. to 4:30 p.m. CT. MLF NOW!  will be live streamed on MajorLeagueFishing.com and the MyOutdoorTV (MOTV) app.

Television coverage of the General Tire Heavy Hitters 2022 Event will be showcased across six two-hour episodes, premiering at 7 a.m. ET, July 16 and running each Saturday through August 20 on the Discovery Channel. A one-hour special episode of MLF Inside Heavy Hitters will also air on CBS in late 2022. New MLF episodes premiere each Saturday morning on the Discovery Channel, with additional re-airings on the Outdoor Channel and the Sportsman Channel. Each two-hour long reality-based episode goes in-depth to break down each day of competition.