PATTERN INSIDE THE PATTERN: Connell’s Savvy Switch to Smallmouth Won the Day at Cayuga Lake 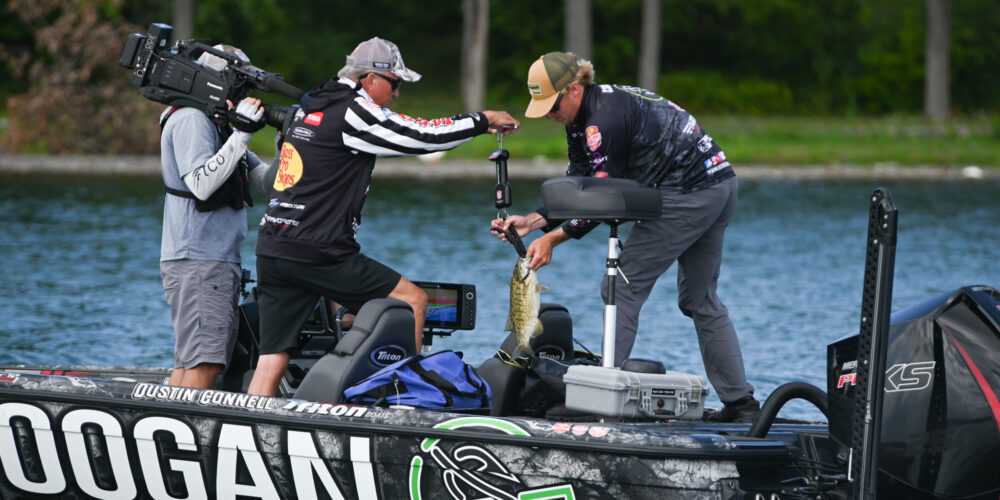 Cayuga Lake in New York is known as an outstanding largemouth bass fishery. Heading into Fox Rent A Car Stage Six Presented by Googan Baits, most pundits (and anglers alike) believed that largemouth would win the day.

Sure, there are a few big smallmouth in Cayuga, but the prevailing wisdom was that they weren’t prolific enough to win a tournament in the Bass Pro Tour “any scorable bass counts” format. But Mercury Pro Team angler Dustin Connell proved that Cayuga more than holds its own in the smallmouth category.

Connell stacked up 96 pounds, 12 ounces of smallmouth in the Stage Six Championship Round to claim his second Bass Pro Tour trophy of the season. The day prior – in the Knockout Round – the Alabama pro loaded up on 82-2 of smallmouth.

Surprisingly, though, Connell’s pre-tournament plans weren’t focused on brown fish at all.

“Historically, Cayuga is known for its largemouth – everyone  fishes for them, and that’s what wins BFLs there,” Connell said. “Going in, I knew there were some big smallmouth in the lake, but not enough to win a tournament. A dark horse, maybe, but likely not a winning deal. At least, that’s what I thought starting out.”

Tour-level professional bass fishing is about winning events, of course, but it’s also about qualifying for championships, trying to win an Angler of the Year title and staying qualified to keep fishing the Bass Pro Tour. Consistency is key. Fishing for largemouth would seem the logical choice on a lake so chock full of them, but Connell let the fish guide him to a bronzeback promised land.

“l’m fishing the first day of practice about three hours in and catch one dink (largemouth),” Connell admitted. “There had to be 60 boats on the north end all fishing for largemouth. I looked around and said, ‘I don’t know about this.’

“I decided to test out the smallmouth bass. The first spot I rolled into and I caught a 6-pounder. I said ‘huh’ to myself because I saw another eight or nine fish with it on my forward-facing sonar. I figured out there might be a big population there, I just needed to figure out how to crush them.”

Once Connell switched to targeting smallmouth, he was all in for the event. The fishing wasn’t as easy as it may have appeared on MLF NOW!, but Connell zeroed in on the magic depth and cover, and rode that for four days.

“I went all over that pond,” Connell said. “It wasn’t super easy. (Fish) were roaming, not sitting on specific structures. But the key was fishing in 23 to 25 feet of water, that was the magic depth range. The grass on Cayuga grows to about 22 feet down. All the bait was there. The smallmouth were just sitting outside of it. They swam up and down their grass highway and kept moving from spot to spot.”

During the Qualifying Round, Connell put the gas down on the first day to weigh over 80 pounds of smallies. He knew he was likely in the cut for the Knockout Round, so he backed off a bit. His confidence was high as he explored and found even more bass.

There was no coasting during the first half of the Knockout Round for Connell, but a key element to his victory didn’t show itself until later that day.

“I got after it pretty good during the Knockout Round,” Connell said. “I knew I needed 50 to 75 pounds to get to the championship day. I caught 40 pounds in the first period and started coasting along at the 55- to 60-pound mark. I found two new places and shook off two or three fish – those new spots are where I won the tournament. Being able to explore and find new spots allowed me the chance to win.”

Connell’s Setup Was Basic But Effective

The technique Connell employed was basic; a drop-shot rig using 7-foot 2-inch Favorite Fishing Hex spinning rod in medium heavy action (he had eight of them on his deck), his reel spooled with 15-pound Seaguar Smackdown Braid and 12-pound Seaguar Gold Label Fluorocarbon Leader. His best bait was a small shad bait since the primary food for the smallies was alewives. Connell also caught several big fish on a Googan Baits Drag N Drop in green pumpkin, mimicking a goby color.

Connell used a heavier leader so he didn’t waste time tying up drop-shots all day. Plus, the leader he used has the same diameter as a 10-pound, so it didn’t negatively impact the presentation. Efficiency and precision made a huge difference.

“The biggest key with the drop shot was using the forward-facing sonar and making really accurate casts,” Connell said. “They’d be swimming, I’d make a proper cast to them, and they’d, like a wolf pack, swim to get the bait.”

Future tournaments on Cayuga may see a few more smallies being weighed, according to Connell.

“I had so much fun, and I think we may have changed how people are fishing on Cayuga during tournaments,” he said. “There may be more smallmouth bass targeted. There are huge fish in there, and plenty of them. This tournament worked out well. I fish to beat the fish, and when it happens, winning takes care of itself.”