PATTERN INSIDE THE PATTERN: How Salzman’s Hard-Earned Dam Knowledge Paid Off at Watts Bar 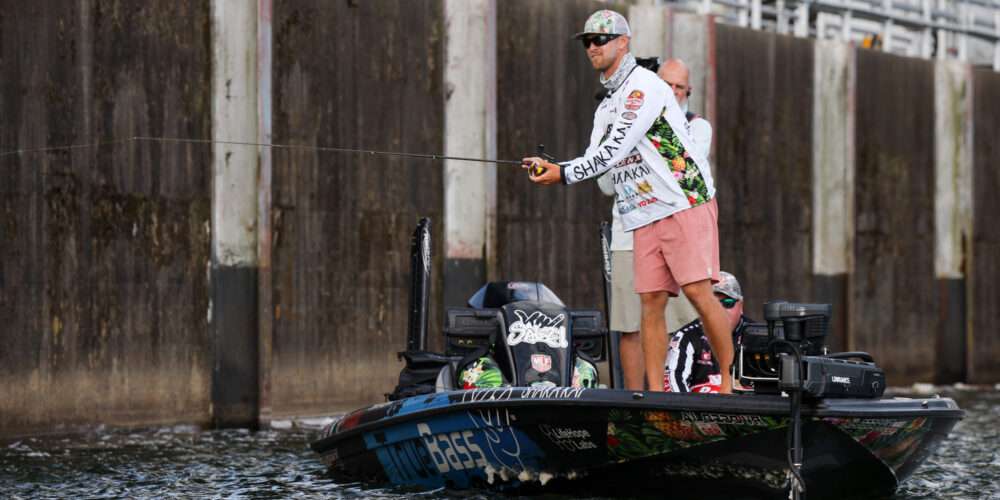 Bass Pro Tour rookie Ryan Salzman took home the trophy and big check with his recent victory at Stage Five on Watts Bar Lake in Tennessee. What may seem like success over a six-day tournament window actually came thanks to 10-plus years of hard work by the Mercury Pro Team angler and intimate knowledge of how bass use dams in the reservoirs along the Tennessee River.

Salzman’s win at Watts Bar – his pattern inside the pattern – was built around his ability to read the fluctuating conditions at the base of Watts Bar Dam. That ability was honed over thousands of hours of work on two other reservoirs on the Tennessee River.

“I made my living fishing by dams at Pickwick and Guntersville Lakes in Alabama as a guide,” Salzman said. “I looked at Watts Bar as just an extension of my home body of water. The high side of a dam always has some current. (Dams are) always worth checking out on the Tennessee River.”

Salzman’s affinity for dam fishing started in college. Due to a lack of funds for gas, he and his friends would launch close to dams because they knew they could find some fish and not have to make long runs.

“I didn’t have much money during college, so my friends and I would always put in by the high side of the dam,” he said. “The high side of Lake Wilson, for example. We never had to run far and it turned out to be a good thing.  Over the years of fishing tournaments and guiding, I’ve learned what holds bass in the area (near a dam) and how to be patient if I know the winning bass are there. Being able to read the current and know where bass will be positioned is huge.”

Salzman found what he was looking for along the high side of the Watts Bar dam during his two-day practice window for Stage Five, but only after thoroughly checking multiple other locations. The dam face just ended up being the perfect storm for him to apply his dam fishing wizardry.

“I checked both dams during practice,” Salzman said. “Below the Fort Loudon Dam was too dirty and had colder water. I trailered down to the other dam and bass were schooling there, feeding on very tiny minnows. All those bass have to do is sit there and the bait is pushed to them with the current.”

“On the first day of the tournament, I left the dam and caught other fish,” Salzman said. “I just fish in the moment. All I’m thinking about is how I can catch more fish. After I left and returned, I knew I wasn’t going to leave the dam again.”

There was very little current being generated on Salzman’s second competition day, which caused his productivity to dip slightly (he caught six fish for 10-12). That didn’t discourage his belief that he was on the right pattern, but just needed to execute better.

“I used my Lowrance ActiveTarget and could that fish were right against the wall,” Salzman said. “I only weighed 10 pounds that day, but I lost a 3-pounder and a 5-pounder. I knew it had the winning fish there.”

The Knockout Round brought a multi-hour weather delay to start the morning, and eventually a dramatic increase in water being pulled through the dam. With strong current and daylong rain, Salzman had to manage his short stretch of water along the face of the dam by using his boat to push a debris pile away from his most productive area. Salzman caught 13 fish for 23-9, good enough for third in the Knockout Round.

The Alabama pro followed up with 13 fish for 24-3 on the final day, squeaking past Jacob Wheeler by less than a pound to earn his first major tour-level win.

Salzman’s success at Watts Bar Dam begs the question: how did the rest of the field miss the fishing bonanza that Salzman discovered and capitalized on for the win? That’s where Salzman’s experience and dam-fishing acumen because the difference-maker.

“Half the field found (the dam pattern), but only one other person lasted past the first period,” Salzman said. “I was the only one with confidence to fish the dam. Guys found it and didn’t know what to do with it. I knew the other anglers were going to leave.

“There are periods where the fish turn on and off. You just need to be patient and know how to fish through it. My knowledge of reading current at the dam and confidence to keep fishing in water that was 60 to 100 feet deep was what really did it for me.”

To get fish to bite in an environment with an abundance of current-generated forage, Salzman matched the hatch for active fish and finessed the inactive bass. His lure choices were a 4.5-inch Roboworm in Morning Dawn when he’d drop-shot deep for inactive bass and small swimbaits when the bass were up feeding (he would upsize his swimbait when there was increased surface disturbance).

“I don’t really know if time of day mattered,” Salzman said. “Calm and sunny were the perfect conditions. The most important factor was the current generation.”