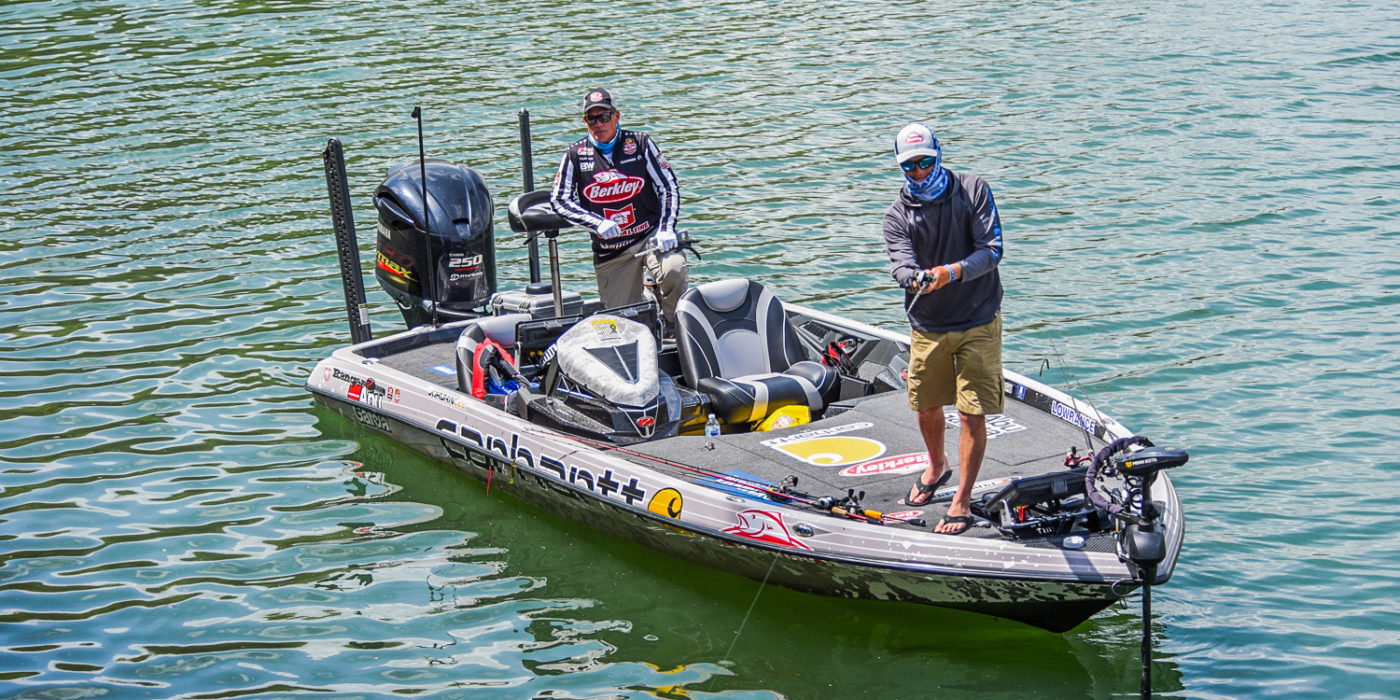 Jordan Lee on the water with his MLF official. Photo by Garrick Dixon

TULSA, Okla. – “Jordan, that will be a fish landing violation. That’s a two-minute penalty.”

Major League Fishing pro Jordan Lee has heard that phrase a lot this season on the Bass Pro Tour. In fact, he’s heard that phrase more than any other MLF pro. Through four stages, Lee has been assessed a fish-landing violation 22 times for a total of 44 minutes. The Alabama pro’s first thoughts when he hears that stat:

“I’m an idiot,” Lee said with a chuckle.

All of those penalties haven’t really hurt Lee this year; he already took home the Stage One Championship, a top-10 and a top-15 finish, and he currently sits in fifth place in the overall standings in the Bass Pro Tour Points Championship race halfway through the season. When it comes to recognizing his mistakes, Lee is quick to point out why he thinks he spends the most time in the penalty box.

“I guess I’m just a little careless when it comes to swinging them in,” Lee explained. “I’m not a guy that likes to play with the fish a whole lot. Typically, I swing in every fish I catch. If the fish is under 4 pounds and I have somewhat heavy tackle, I will swing that fish in 100 percent of the time. That’s probably what hurts me the most now that I think about it.”

Lee isn’t the only angler who has had some trouble with landing his fish the right way. Aaron Beshears, Manager of Competition Crew Recruiting and Training for MLF, says that the majority of the penalties the MLF officials call are fish-landing violations. Some fish-releasing penalties are called, but Beshears says thanks to the anglers and their ability to adapt to that rule, that penalty is not called as often.

While the penalties may seem like a minor offense to the fans, Beshears is quick to point out the importance of the rules.

When an angler is in the middle of serving their penalty, two minutes can feel like forever, especially when the clock is winding down in the round. While serving the 120-second timeout is all some anglers experience in a round, collect a couple of violations and it can really begin to affect your day.

“Most of my penalties come when I have a fish hooked up and they are smaller fish,” Lee pointed out. “I remember several times having a non-scorable fish in the boat and it just comes off. I’ve had that happen five or six times, so that’s 12 minutes right there.”

“We’ve seen in MLF how just seconds can be the difference between making the cut or missing the cut,” Beshears said. “You don’t want to be the first guy outside of the cut because you had to serve a couple of more penalties than another angler. It can be crucial.”

As Lee begins preparations for the Phoenix Boats Stage Five Presented by Mercury in Cullman, Alabama, he will do his best to avoid adding on to his already impressive penalty total. However, it may be difficult on Smith Lake, because as Lee has experienced, the spotted bass that populate the lake can be quite the handful.

“Spotted bass are a cantankerous kind of fish,” Lee detailed. “They’re similar to smallmouth in that they have a lot of fight in them. They may be smaller, but you want to get those fish in the boat. If I have to take a penalty then so be it, but there’s really not much you can do about it.”