Powroznik Powers Through to Okeechobee Victory 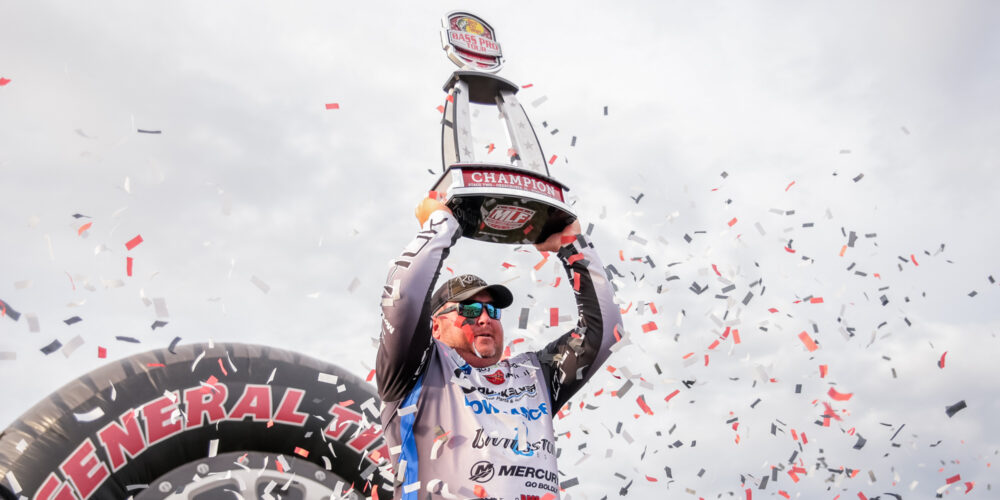 OKEECHOBEE, Fla. – Lake Okeechobee did indeed save the best for last at the Bass Pro Tour Favorite Fishing Stage Two Presented by Bass Cat. We saw our biggest weight totals, most bass caught by single anglers, and it was a fight to the finish.

Although the final standings show a win of over 11 pounds for Jacob Powroznik, it was a tight race for most of the day, until the Virginian took control in Period 3.

Take this as evidence of how close it really was. After Period 2 closed, the top three anglers were separated by just six ounces. Randall Tharp was edging out Jacob Wheeler and Michael Neal, who all had 28 pounds and change to begin Period 3.

Powroznik was lurking behind and his eight bass for nearly 30 pounds in Period 3 was the difference-maker in claiming his second career Bass Pro Tour win. He ended the day with 15 bass for 49 pounds, 11 ounces, which were both easily the best totals of the week.

Powroznik Closes out Another Win

Jacob Powroznik did enough during Periods 1 and 2 to give himself a chance and was able to close out the win late thanks to a simplified approach that he relied on all week long.

As time expired, Powroznik was emotional and thankful to close out the win.

“You never know and when it is your time, it’s your time. I just kept my head down and kept grinding in the same 300-yard stretch,” he said.

That area is known as “the pass,” and Powroznik shared that it is at the mouth of Buckhead Ridge. That area had all of the ingredients he was looking for.

“It had the right depth, bottom composition, and eelgrass. I was looking for a hard bottom because that’s where they spawn. I was targeting the holes in the grass,” he said. “The fish were in the open areas and if it was too close to bulrushes, the eelgrass would be too choked up.”

He relied on a Florida staple, a Junebug-colored swimming worm for his win, and added that he rotated between four different brands of worms.

“You didn’t have to have a certain brand or anything, that’s just what they wanted,” shared Powroznik, who fished the worm on a 7-6 heavy Quantum rod paired with an 8.1:1 Quantum Smoke S3 reel spooled with 65-pound Hi-Seas braided line. He fished the worm with a 3/16-ounce Elite Tungsten weight with a 6/O Mustad Extra Wide Gap hook.

Like Powroznik, Neal found a productive area and milked it for all that he could. The area that he targeted was on the lake’s popular “North Shore” area, between Indian Prairie and Harney Pond.

Neal was ecstatic with his finish based on his practice and did his damage primarily with a homemade black and blue swim jig paired with a Big Bite Baits Kamikaze serving as the trailer.

“I was focusing on eelgrass mixed with dollar pads, and the key was to have a little deeper water. The foot and a half to two foot of water was the best,” Neal said.

Today he also mixed in a buzzbait and a Big Bite Baits Trick Stick. “When the water slicked off, I had to slow down and fish that stick bait,” Neal added.

For part of the day, it looked like Wheeler was on his way for the second win of the season in as many tries. While it didn’t happen, he was happy with the result.

“I gave it all I had,” he said as time ran out for the day. Wheeler relied on a swim jig during the early rounds and switched to a topwater bite to win yesterday’s Knockout Round and finish third today.

Today, he scored 12 bass for 34 pounds, 6 ounces thanks to a one-two punch of a prop bait and frog.

“I was focusing on really shallow pockets where the fish were pulling up to spawn. The water had to be shallow enough that it wouldn’t even register a depth on my electronics, the shallower, the better,” Wheeler shared.

He focused on the Harney Pond and Bird Island areas of the lake to secure his second Top-3 finish in a row and grab the early lead in the race for Points Champion.