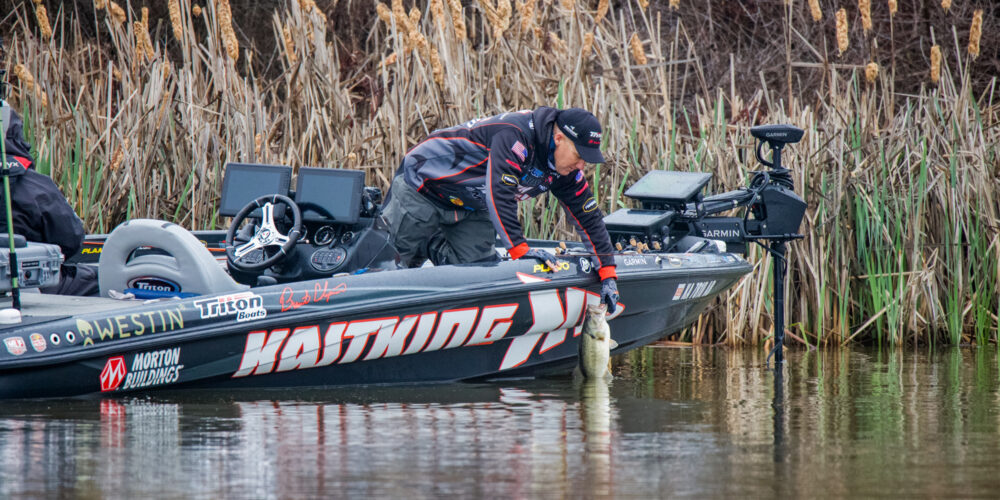 MLF Bass Pro Tour angler Brent Chapman feels that prespawn fishing can be one of the most exciting times of the year to be chasing bucketmouths. Sure, talking about them in the prespawn state may seem a bit premature in the winter months, but in the far south (think Florida, parts of Texas and Alabama), prespawn is just around the corner.

“Fishing for prespawn largemouth has to be one of my favorite times of year to fish for them,” Chapman says. “It’s not the best for catching big numbers of bass, but it’s a phenomenal time of year to hook big bass. I especially love catching the females who are filled with eggs before the spawn.

“What I really enjoy during prespawn is how the fish move up quickly and eat. I experienced this at the 2020 Bass Pro Tour event on Lake Eufaula. I’d fish an area and get nothing, then come back and they were there feeding. When they feed during the prespawn up in the shallows, the bass are usually very aggressive. You never know if fish are coming up, but when they do, the first few waves can be amazing. The bass are fat and strong. It’s a great time of year.”

Put in Your Time for Prespawners

Chapman has a very basic approach to catching shallow prespawners; it involves some old standbys and a grind-it-out attitude.

“I have sort of a three-piece approach for catching prespawn largemouth,” Chapman admits. “First, I use moving baits. That darn bladed jig, that’s what I did damage on in tournaments during the 2020 season. I was late to the game with that lure, but it works. I also use squarebill and lipless crankbaits and spinnerbaits. Seriously, every time I use a bladed jig I ask, ‘Why did it take so long for me to get in the game with it?’ I think 80 percent of the fish I weighed in during 2020 were caught with a bladed jig.”

Second up in Chapman’s go-to prespawn kit is no surprise to any bass angler. Spoiler alert, it’s a jig.

“If I’m fishing an area I really like and the moving baits aren’t producing well, I’ll pitch a 3/8- or 1/2-ounce jig and really pick the area apart,” Chapman says. “I may also pitch a creature bait around, too. I catch some of the biggest bass of my year on a jig prespawn.”

The third prong on Chapman’s prespawn trident is somewhat different than you’d expect. Nope, it’s not finesse fishing. Instead, Chapman prefers to circle back to method number one.

“If the fishing is super stupid tough, I have to go back to basics,” Chapman says. “If I can tell the day is gonna be a grind, I go back to my strengths: a bladed jig and squarebill. I’ll simply go back and fish the areas I know to be productive and I work hard and squeeze out every bite I can.”

Chapman has learned to simplify his fishing approach over the years. Whether he’s fishing for fun or fishing for cash, he always has his gear for his daily game plan prepped and ready.

“I suggest everyone start using a day box, like I do,” Chapman advises. “By that I mean, one box that has all of the baits you’ll use that day. If it goes according to plan, I won’t need to get a bait out of any other box. If you see me on a live broadcast digging around for another bait, you’ll know my initial plan isn’t working.

“I’ll take a 3700 Plano EDGE box – they’re awesome at keeping baits dry and resistant to rust – and have all the baits I have tied onto my rods already rigged in there. Not just the lures, but the trailers already attached. If I need a replacement bait, all I need to do is tie it on. I don’t waste time rigging. I think you should have a day box, whether you fish for a living or just for fun.”

Chapman’s day-box approach may have been kick-started by how a bass-fishing legend simplified his own day.

“I’ll never forget, I was fishing with bass fishing legend Denny Brauer on Table Rock Lake years ago at a draw tournament where you drew another pro to fish with that day,” Chapman recalls. “He essentially brought a Walmart sack with him in the boat, filled with jigs, trailers and crankbaits. He looked at me and said, ‘This is what I’m gonna be using all day, why would I need anything else?’ Talk about simplifying, but it made sense.

“That’s why I like a day box; it keeps it simple and efficient. In bass fishing, if you’re not casting, you’re not catching.”