Q&A with Chris Lane: ‘Having Success Helps, but Failures Help Too’ 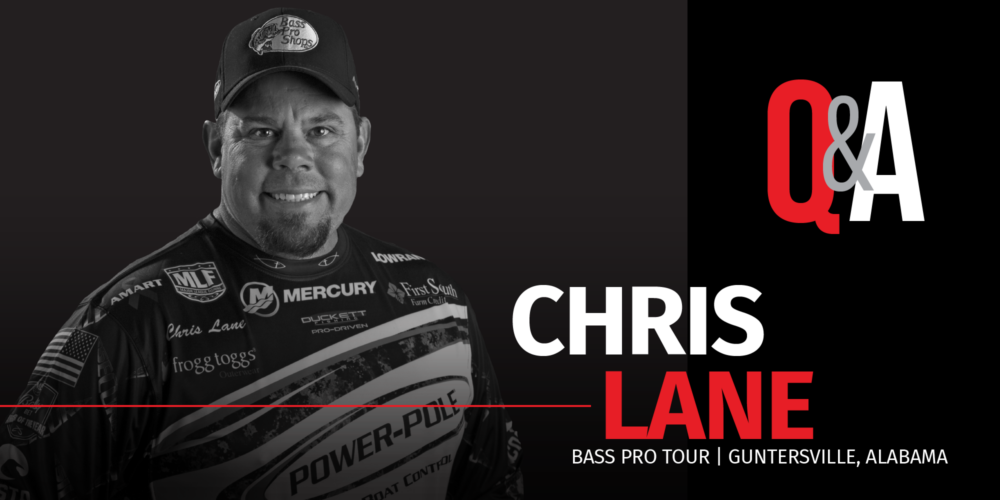 Mercury Pro Team veteran Chris Lane has won more than $2.2 million in competitive bass fishing in his 19-year career, but the 2022 season is shaping up to be one of his best. The Alabama angler is sitting ninth in the Bally Bet Angler of the Year standings on the strength of three Top 20 finishes in the five Bass Pro Tour events to date.

Lane chatted with MLF about the 2022 season and life in general shortly after the Fourth of July. Here’s what he had to say:

You have a rare six-week break between tournaments. What have you been up to lately?

CL: Oh man, playing golf and taking a break from fishing a little bit, and spending time with the family. On the Fourth of July, we had a big crew come up from Florida and celebrated this great country we live in.

At what point did you realize this season is going well for you?

CL: You know, I really hadn’t thought about it. I just stayed in the moment of every tournament and cast to the spot (I was fishing), knowing every fish makes a big difference.

You fish with your brother Bobby on the Bass Pro Tour and your son Cal on the Tackle Warehouse Pro Circuit – what’s it like competing alongside them?

CL: It’s fantastic, we have great camaraderie off the water and full-blown competition with side bets. It’s a great time.

Does the competitive nature of MLF tournaments compare to other things you guys compete at?

CL: Oh yeah, it falls right in line. Sometimes we’re out there and somebody throws a $20 side bet on who finishes the highest that day and then other times we might not have any bets at all, depending on how things go.

What kind of bets have you guys made?

CL: Golf, cards, fishing – there’s been times one of us wrote a check to the other because they didn’t have enough (cash) to pay. You try to get everything the guy has in his pocket if you can, but then you give it back a week later.

What was it like seeing your brother Bobby win REDCREST?

CL: Watching Bobby win REDCREST was just a phenomenal feeling – not just for a brother, or a mom or dad or family – but for the fans too because he finished second so many times. To see him win, that was awesome for the entire fishing world.

Where are you heading to next?

CL: Well, we’re celebrating my parents’ (Bob and Peggy Lane) 50th anniversary in a couple of weeks then on to ICAST and then on to Lake Champlain (Stop 6 of the Pro Circuit), I believe.

What do you miss the most about home when you’re on the road?

Competitive fishing isn’t easy, so what drew you to it and what motivates you to keep going?

CL: I think it’s just the drive since this is something we’ve always done since we were kids. The dream of being a fisherman and having success helps, but failures help too because it gives you the drive to be better.

Cal is competing in the Toyota Series, Pro Circuit and Phoenix Bass Fishing League. What do you think the future holds for him?

CL: He’s got the mentality and the drive to be one of the best in the world. He’s so young and absorbing so much from being on the road that he has what it takes, but just needs some breaks here and there.

CL: I’ve received a lot of excellent advice throughout the years and a lot of it I used, but the one that sticks out the most is to leave everything you can on the water. No matter what you’re doing, do all you can do. At the end of the day, if you feel that you did everything you could do, then you can’t let your head sag by any means.

CL: I’ve seen it all, but I think the craziest one is banana in the boat, some people do it and some people don’t. I don’t really pay attention to superstitions a whole lot. But, with the younger generation that’s coming up, routine is the most superstitious thing you can do because if you stay in your routine you will do well. Whether it’s a superstition or a routine, you have to stick with it.

Does anyone know the location of your favorite secret fishing spot at home?

CL: I fish whether it’s bream, crappie, catfishing with noodles, whatever it is – it drives us and keeps us going. There are no secret spots.

What have you been listening to recently?

CL: Lee Greenwood on Fourth of July is a must. Then it’s country on out, some rock ‘n’ roll sometimes. It depends on what’s shaping up out there.