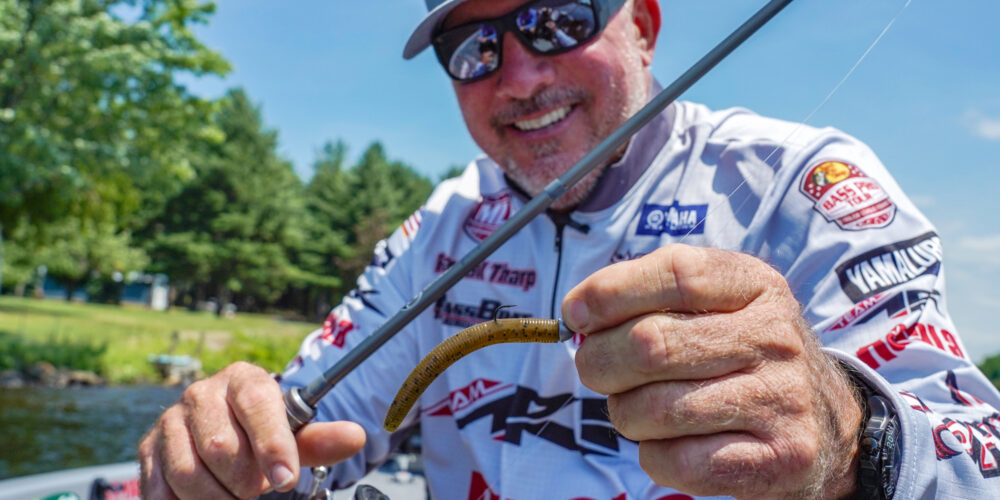 Florida pro Randall Tharp has earned a well-deserved reputation as a master with a flipping stick. He’s scored big wins punching mats and prefers to fish with a heavy rod, thick braided line, and big tungsten weights. Tharp is one of the best in the world at catching bass on heavy gear.

But he has a secret: the “Honey Badger” loves the Ned rig.

The finesse technique with a bite-sized plastic is as far away from flipping and punching as you can get, but Tharp has learned to love it. This is amplified anytime the tournament trail takes him to northern waters, and Tharp now believes that a Ned rig is the best way to catch bigger-than-average smallmouth.

The Ned has exploded in popularity in recent years. There are rods designed for the technique and just about every major lure manufacturer has Ned-specific jigheads and plastics. But while the method was getting immensely popular, Tharp largely ignored the hype (until fairly recently).

At the 2020 Heritage Cup on Skaneateles Lake in New York, Tharp found himself struggling even though he could see smallmouth swimming everywhere.

“I had tried everything in the boat except for one package of the Beatdown worm that Zoom had sent me,” he recalled. “I thought ‘why not?’ and rigged it up. I was laughing at myself for resorting to it, but my first cast ever with a Ned rig turned into a 3-pound smallmouth.”

Tharp quickly figured it out and ended the day in second place in his Elimination Round group. Since then, he’s become a big fan of the Ned.

Over his years of traveling north for tournaments in smallmouth country, Tharp has always relied on a tube. But that has changed since he started fishing the Ned.

“I hate to say it, but I don’t throw a tube anymore,” he admitted. “It’s one of the most famous smallmouth baits and has been working for years, but I think the Ned rig has that same great spiraling action, and you don’t lose as many fish. A tube has a bigger weight and hook and you tend to lose more fish, but with the Ned rig – even with that little hook – I land about 90% of the fish that I hook.”

Tharp theorizes that, like a tube, the Ned rig is the best imitator for a Great Lakes smallmouth’s favorite food: the goby.

“It looks exactly like (a goby) with the same size and profile that the big smallmouth can’t say no to it,” he said. “Most of my bites will happen right when it hits bottom, but I’ve had success in lighter current just slowly dragging it to make it look like a goby swimming around down there. I don’t hop it or rip it off of the bottom; I just drag it. A drop-shot tends to be more effective in heavier current, but the Ned rig will still catch them.”

The Zoom Beatdown worm is Tharp’s go-to, and he will adjust his jighead size based on the depth and current, opting for a new VMC Ned-specific jighead that will debut at ICAST this week. Generally, Tharp likes to go as light as possible with his jighead.

“Most of the time, I use pretty light (jigheads) but will go as heavy as ¼-ounce in water deeper than 20 feet, or when I’m in heavy cover,” Tharp said. “I don’t want the bait falling like a rocket, so the smaller weights help get that great action as it falls.”

Tharp has also learned to rely on a medium-light action rod as he thinks it ups his odds of landing a big jumping smallmouth.

“I’ve tried some heavier and longer spinning rods but settled on my 6-foot-10 medium-light Ark Honey Badger Series rod,” he said. “I spool my reel up with 8-pound Sufix 832 braid with a leader of 6- or 8-pound-test Sufix Advance fluorocarbon.”

Through his journey to an unexpected Ned rig fan, Tharp always has one rigged up anytime he’s smallmouth fishing.

“Most guys wouldn’t associate me with light line and finesse fishing, but I love the Ned rig up north,” he reiterated. “I’m a superfan. It just gets bites when nothing else will, and the big smallmouth can’t resist it.”