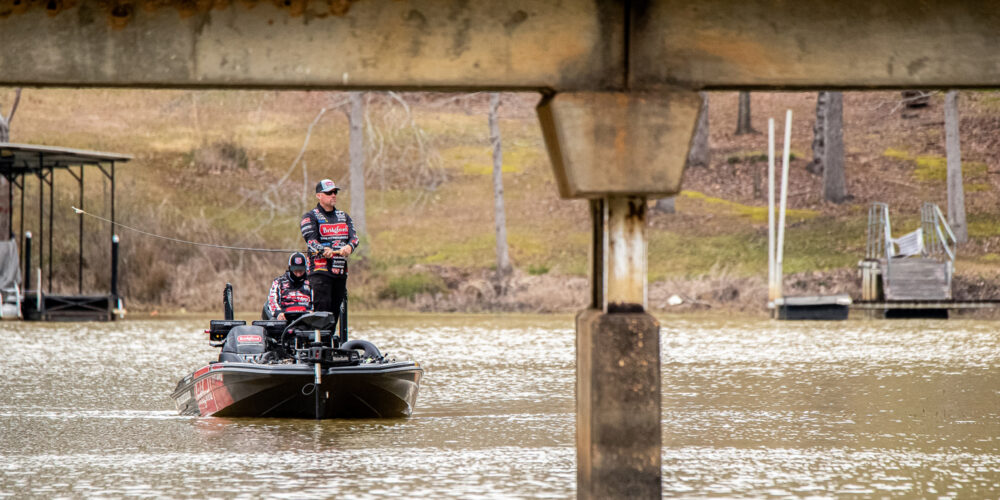 EUFAULA, Ala. – This week at REDCREST 2021 presented by Old Wisconsin Sausage, the 40 anglers were thrown a curveball with the change of venues from Lake Palestine, Texas, to Lake Eufaula, Alabama.

Along with the change of venue, the field was also given just one day of practice to figure out a large lake.

James Elam, Luke Clausen, and Brent Ehrler all finished the first day with only one bass and each of them managed to score four bass the second day as they finished 24th, 25th, and 26th.

They all made a run for it late in the day, but ultimately fell short of qualifying for the Knockout Round. Each of them found a reason for their missteps and what they wished they had done on the first day.

With one day of practice, Elam had to decide whether to focus his efforts on the north or south end during practice. He chose to practice north of the takeoff site, but then decided to scrap that plan and head southbound when the event started.

“The whole thing for me was that I guessed wrong during practice,” Elam said. “I fished north and didn’t find them, so when the tournament started, I went to the south end of the lake and fished blind. I spent the tournament day looking for areas.”

Elam landed one fish the first day before rebounding on the second day with four fish for 12 pounds, 11 ounces.

He came up short, but knew he was in the right area from the start.

“Ott DeFoe, Bryan Thrift, and Andy Montgomery were all in the area and were catching them immediately the first day,” Elam says. “I was still in search mode. My first day of the tournament was like the second day of practice.”

Clausen’s Timing Was Off

Clausen returned during the second day to an area he fished on Day 1 and caught four bass after coming up empty-handed there the first day of competition. He believes he was just off on the timing.

“I went through there in the morning the first day and didn’t catch one,” Clausen said. “On the second day during the middle of the day, I went back and caught four right away.”

He ended the day with four fish for 11-4 and finished one place behind Elam in 25th.

Clausen discovered the area late during practice but felt it should have been an all-day bite there.

“It was a channel swing bank on the main lake that usually isn’t as affected by changing air temperatures,” Clausen described. “They must have needed some sunlight to pull up. In hindsight, I wish I would have given it a chance in the afternoon on the first day.”

Going into practice, Ehrler decided that he would focus on fishing offshore.

“I didn’t look too deep, but focused offshore in ten to twelve feet of water,” Ehrler said of his practice approach. “I spent my time marking stuff and didn’t fish because I just didn’t have enough time in one day of practice.”

The first day, the conditions didn’t set up well for an offshore bite, but Ehrler stuck with it anyways.

“It was rainy and windy, which are the wrong conditions to be off of the bank,” he said. “It didn’t work out the first day, so I started the second day and ran the bank. I went offshore late in the second period and it was flat and sunny. I started catching them under the perfect conditions for offshore fishing. I should have paid attention to the conditions and bailed on the shallow stuff earlier.”