Ride Along with Kevin VanDam for Table Rock Lake Breakdown 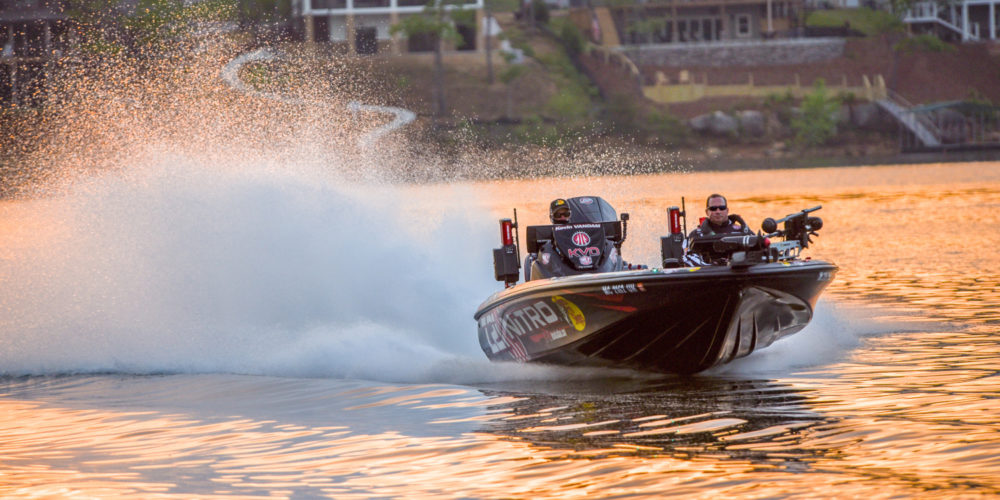 Kevin VanDam stays on the move this time of year on Table Rock, looking for fish in all phases. Photo by Garrick Dixon
May 11, 2019 • Mike Pehanich • Bass Pro Tour

BRANSON, Mo. – Fabled Table Rock Lake will be the sixth stop on the 2019 MLF Bass Pro Tour. This impoundment of the White River is a jewel of the Ozarks and a favorite destination among pro and everyman angler alike.

By the time the 80-angler field reaches Branson, Missouri, for the Berkley Stage Six presented by True Timber (May 17-22), a large number of Table Rock’s bass will have concluded spawning activity and retreated from bed regions to transition stops and early summer haunts. But not all of them: bass moving in and out of the spawning bays in the coming week will still offer some of the season’s hottest action.

Mercury pro Kevin VanDam and Table Rock are fairly synonymous. Even though he’s never won a major event on the lake, he’s spent more time on Table Rock than almost any other lake because of sponsor-related activities.

If you’re looking for information on how to catch bass in the late spring on this lake, VanDam is as good a source as any, as I found out when I rode along with him one late April as he picked apart Table Rock.

Hard bottom is the norm on highland reservoirs, but bottom content will vary in form and substance.

“The real key on these highland reservoirs in the spring is to look for bank transitions,” explained VanDam. “The great thing about a highland reservoir is that a lot of times you can see on the shore what’s going on underneath the water. Gravel is key, but I’m really looking for changes in the rock on the bank, where there’s some pea gravel and chunk rock mixed together, especially where it transitions from one type to another – where the rock size changes or the gravel gets a little rocky.”

Seasonal rains influence bass activity and location. Water color can vary from clear to nearly muddy on these Ozark waters.

“The water has some color right now, so I think that has them spawning a little shallower,” VanDam assessed that day. “The main zone for me has been from 6 to 12 feet.”

Grass patches, bushes and timber are all worthy of attention.

“Those bigger post-spawn females love to stage around cover, hover near it,” Kevin explained. “So I know some of those bigger fish are going to be in the timber. They just love to suspend above a glass clump, too.”

VanDam weighed other factors, too. A full moon had occurred six days earlier, a good sign that a lot of females had dropped their eggs and retreated to cover. He noted that wind blowing onto a flat or secondary point can be a key factor, whether it’s stimulating a bite or steering spawning fish into either deeper or better protected bedding areas.

“When you have that diversity between spots, largemouth and smallmouth, fishing is just that much easier,” VanDam explained. “Sometimes they’re mixed together, but other times the pattern may be for just one particular species. That’s the great thing about these highland reservoirs. There are a lot of bass, and they all spawn at a little bit different time. You find fish at different stages of the cycle, so one species is always going to be biting.”

A smallmouth crushed a crankbait to illustrate one of his favorite spring scenarios: wind blowing in on a secondary point with scattered chunk rock and gravel.

“Once you’ve developed a pattern for the day on lakes like this. you can run that pattern on the whole lake,” VanDam said. “That’s why I love fishing this kind of lake.”