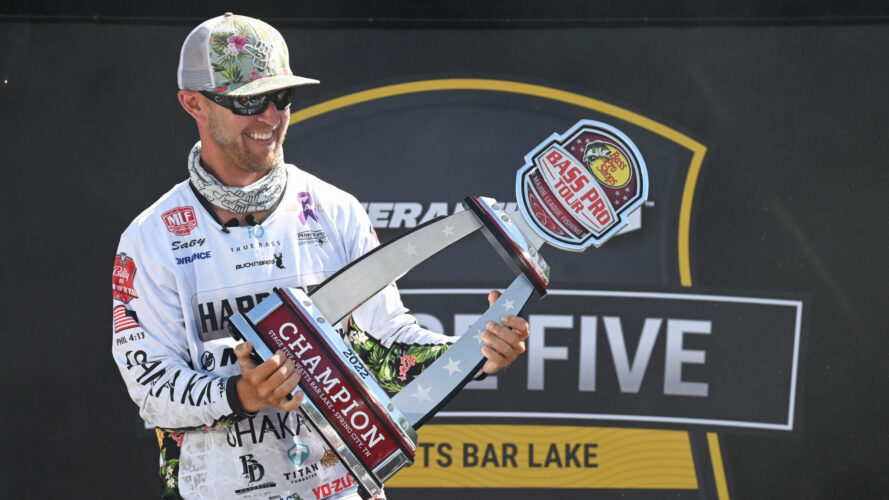 SPRING CITY, Tenn. – For the fourth time in five events in the 2022 Bass Pro Tour season, there’s a first-time champion. Ryan Salzman is the General Tire Stage Five Presented by Covercraft champion on Watts Bar Lake after catching 13 bass for 24 pounds, 3 ounces and beating second-place Jacob Wheeler by just 11 ounces. The is Salzman’s first professional-level win since becoming a full-time pro in 2019.

The key for Salzman on Thursday, and really his final two days of competition, was camping out near the Tennessee Valley Authority’s Watts Bar Dam. The Alabama pro was there all day during the Championship Round and for the majority of the Knockout Round. Even though the dam was productive for him over his final two days, the spot had been on his radar since his first Qualifying Round.

“I found this spot on the first day and I noticed that there was enough fish to win here on my electronics,” Salzman said. “The first two days I fished here, the fish didn’t school up though. During the Knockout Round, the TVA decided to start generating 35,000-40,000 watts by running water through the dam and it really lit this spot up.”

With that running water, Salzman tied on a drop-shot consisting of an 1/8-ounce tungsten weight with an 18-inch leader and a 4.5-inch Roboworm in morning dawn color. That combination got him through to the Championship Round, so of course, that’s what he went with on Thursday.

Salzman was looking good through his first two periods, catching nine bass for 16-6 and sitting in second place behind Wheeler. But when the TVA stopped pulling water through the dam in the third period, it could have spelled danger for Salzman.

“They stopped pulling the generator around 2 p.m. today, and that caused the bass to stop chasing bait,” Salzman said. “So, I moved away from the generator and back to a place on the dam where I first started. That move got me a 2-pounder with about 30 minutes left and that was the difference.”

That 2-pound largemouth with only 26 minutes left in the day pushed the HARDCORE pro ahead of Wheeler by just 15 ounces. Wheeler was unable to get another scorable bass on the board as time expired, giving Salzman his first pro-level win and a $100,000 check.

A Look at the Bally Bet AOY Race

While he didn’t come away with a win, Wheeler earned some big points once again in his chase for back-to-back AOY titles. Wheeler entered Stage Five with a 17-point lead over Jordan Lee for the top spot. With his second-place finish on Watts Bar and Lee’s 23rd-place finish, Wheeler’s lead increases to 38 points over Lee with only two events left in the 2022 season. Wheeler’s lead over third-place Andy Morgan has grown to 62 points.

If Wheeler can muster solid finishes on Cayuga Lake in August and Mille Lacs Lake in September, it may be more than enough to solidify Wheeler as the AOY in 2022.

The Bass Pro Tour returns on Aug. 6 as the 80 pros head to Cayuga Lake in Union Springs, New York, for Stage Six.